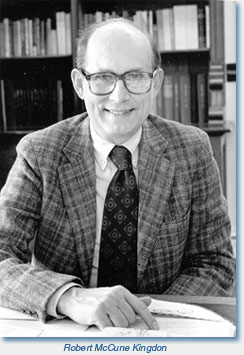 Influential scholar of the Reformation

Robert McCune Kingdon, Hilldale Professor of History emeritus at the University of Wisconsin-Madison, died on Friday, December 3, 2010, in Madison, Wisconsin. He shaped the study of the Reformation both in the United States, where he served as beloved mentor to generations of scholars, and in Geneva, where he formed lifelong friendships, building scholarly and personal bridges between that city and American scholars. His own work, on Geneva and the French Reformation, was methodologically and conceptually pathbreaking.

Born in Chicago, Illinois, on December 29, 1927, Bob Kingdon spent his first 12 years in Hawai’i, where he grew up barefoot. He graduated summa cum laude in 1949 from Oberlin College, and in the fall of that year he entered the graduate program in history at Columbia University, completing his MA the next year and his PhD in 1955, under the direction of Garrett Mattingly. For his dissertation, he posed what he called a hypothesis on how the Reformation spread from John Calvin in Geneva outwards into France and elsewhere. To test that hypothesis, he went to Geneva, a place, Mattingly warned him, of no good restaurants. The product of that research was his first book, Geneva and the Coming of the Wars of Religion in France, 1555–63 (Droz, 1956; 50th anniversary edition, 2007), which detailed how ideas moved in the 16th century from a center of Reformation to isolated, persecuted communities. It was followed by Geneva and the Consolidation of the French Protestant Movement, 1564–71 (Geneva and Madison, 1967). In total, he published six monographs and twelve edited volumes. In 1988, Kingdon published another pathbreaking book, Myths about the St. Bartholomew’s Day Massacres, 1572–76 (Harvard University Press), which again drew upon his extraordinary archival knowledge to build a picture of the working of Reformation polemics. In 1995, he published Adultery and Divorce in Calvin’s Geneva (Harvard University Press), which offered some of the earliest findings from his work in the Registers of the Consistory of Geneva, overthrowing familiar clichés, as he so loved to do, with the substantial details culled from reading the sources. In these publications, a new sense of Calvin and Geneva emerged—of a supple disciplinary body, the Consistory, and of a man of considerable political skills who simultaneously revealed deeply humane pastoral concerns and a crystalline vision of morality.

Kingdon was one of the first American historians of the Reformation to go to the archives. His influence on the field is inseparable from his intimate and singular knowledge of the Genevan archives. In his own written work, he modeled history as he believed it should be written: whatever theory one might be testing, historians are bound by their sources; they must know those sources, have a mastery of them linguistically and contextually, and their interpretation must respect those sources, their voices, their perspectives. This deep respect for the voices of the past he taught his students. If there is a Kingdon school, this distinguishes them: “You must go to the archives” to answer any question.

From his commitment to archival research arose the last major project of his life, the publication of the Registers of the Consistory, the disciplinary body Calvin helped to found, first in their original language and then translated into English. In collaboration with Librairie Droz in Geneva, and working with a staff of editors, Kingdon was working through the registers from their beginning. He had raised the funds, much of it his own, to ensure the completion of the project after his death.

He began teaching at the University of Massachusetts at Amherst in 1952. In 1957, he moved to the University of Iowa, where he received tenure. In 1965, he joined the history department at the University of Wisconsin-Madison as full professor. As one colleague said of Kingdon’s teaching, the lecture platform was to Bob Kingdon what the telephone booth was to Clark Kent. In 1974, he was appointed a permanent member of the Institute for Research in the Humanities at the University of Wisconsin, serving as its director from 1975 to 1987. As director, Kingdon brought in major European historians who participated in his graduate seminars, fostering international conversations. He was still overseeing dissertations when he retired in 1998, in total some 34 on topics that ranged more widely than any other historian on either side of the Atlantic: on Reformation France, Switzerland, Italy, Germany, Scotland, and England; the Reformed tradition; Martin Luther; the Catholic Church and the Catholic Reformation; women’s history; and social, political, and religious history.

Kingdon held fellowships from the American Council of Learned Societies (1960–61), the Institute of Advanced Study at Princeton (1965–66), and the Guggenheim Foundation (1969–70). He was awarded a Forschungspreis from the Alexander von Humboldt Stiftung in Germany (1992–94). He served as president of the Society for Reformation Research (1970–71) and of the American Society of Church History (1980). He helped found the Sixteenth Century Studies Conference, consciously nondenominational and ecumenical. He served many years as the editor of the Sixteenth-Century Journal, which offered dozens of younger scholars their first opportunity to publish. In 1988, he was awarded a Hilldale Professorship, the highest endowed chair of the university, and in 1992 was accorded the Hilldale Award in the Humanities, the university’s highest recognition.

It would not, however, be a fitting tribute to the man were it not to include one of those wonderful details he so treasured. Kingdon collected miniature penguins. In high school, he had been nicknamed “Penguin,” and it was so like him, to take a joke at his own expense and turn it into a source of glee.