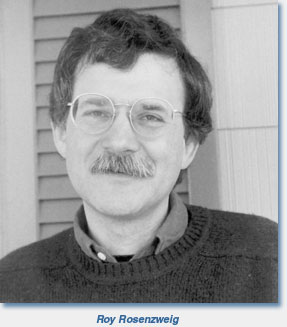 Roy Rosenzweig, the distinguished American historian, died on October 11, 2007, from lung cancer; he was 57. Rosenzweig, who received his BA from Columbia in 1971 and his PhD from Harvard in 1978, taught for more than a quarter century at George Mason University (GMU) in northern Virginia, where he was the Mark and Barbara Fried Chair in History and New Media and founded (in 1994) and directed the Center for History and New Media (CHNM). Rosenzweig served as vice president of the Research Division of the American Historical Association from 2003 to 2005.

Roy Rosenzweig helped pioneer important new historical fields of inquiry and presentation, including cultural, public, and digital history, shaping each field's basic conception and presentational forms through the power of his intellect as well as his prodigious research, writing, and publications. His career was marked by an extraordinary generosity toward his fellow historians, by a keen commitment to collaborative historical practice, and by a gentle irony coupled with a pointed sense of humor.

Rosenzweig wrote dozens of important articles in labor, radical, social, and cultural history, as well as in public and digital history, which appeared in major scholarly journals, including the American Historical Review, the Journal of American History, and American Quarterly. He authored or co-authored major prize winning books, including Eight Hours for What We Will: Workers and Leisure in an Industrial City, 1870–1920 (1983); The Park and the People: A History of Central Park (1992, with Elizabeth Blackmar); The Presence of the Past: Popular Uses of History in American Life (1998, with David Thelen); and, most recently, Digital History: A Guide to Gathering, Preserving, and Presenting the Past on the Web (2006, with Daniel Cohen, his CHNM colleague). Rosenzweig also co-edited (with the late Susan Porter Benson and Steve Brier) the Critical Perspectives on the Past book series at Temple University Press, which published nearly three dozen monographs and edited collections on a wide range of historical subjects over a 20-year period. Rosenzweig's last published (and co-authored) work, the third edition of the American Social History Project's (ASHP) Who Built America? was published by Bedford/St. Martin's in early 2008.

It is no accident that most of the scholarly and public history projects Roy Rosenzweig undertook over his career were attributable to "Rosenzweig and. . . ." Rosenzweig had a deep and abiding commitment to the collaborative process, a commitment he enthusiastically embraced in the face of the history profession's dogged belief that only solitary scholarship counted. His collaborative efforts began after graduate school, when, like so many of his good friends, he served as a member of the editorial collective of the Radical History Review, a journal that is still published after more than three decades and helped shape a whole generation of labor, social, cultural, and public historical research, writing, and teaching. Rosenzweig was the quintessential radical historian throughout his long and illustrious career, profoundly committed to broadening the subject of historical inquiry, to realizing the democratic possibilities of doing and using history, to minimizing the theoretical obfuscations that marred so much scholarly writing, and to finding new ways and presentational forms to convey historical ideas to a broad public audience. He was also a wonderful editor, enormously generous with the time and attention he lavished on dozens of manuscripts, whether by senior scholars, junior faculty members, or struggling graduate students. Dozens of great books and articles in the field profited from his judicious editorial eye and pen, as is attested to in dozens of introductions and acknowledgments in scholarly monographs and journal articles.

Over the past 15 years, Roy Rosenzweig turned his extraordinary attention and commitment to digital history. He brought to the field (as he did to everything he worked on) an uncommon intelligence, a tireless capacity for work, and a playful imagination. My colleague Josh Brown and I had the privilege of co-creating, co-authoring, and/or co-producing with Rosenzweig the award-winning Who Built America? CD-ROMs. With dozens of colleagues at ASHP and CHNM, we (Roy, Josh, and I) developed the Liberty, Equality, Fraternity: Exploring the French Revolution CD-ROM/web site and the History Matters and September 11 Digital Archive web sites. In all of these projects, Rosenzweig was the intellectual anchor, inspiration, and gentle taskmaster who drove all of us to do more and to do it better. The first Who Built America? CD (1994) and the History Matters web site (2004) were each awarded the James Harvey Robinson prize by the American Historical Association for "outstanding contribution to the teaching and learning of history."

Rosenzweig's innovative academic work and his dedication to democratic scholarship were repeatedly recognized in numerous personal awards and accolades as well, including the second Richard W. Lyman Award in 2003 from the National Humanities Center and the Rockefeller Foundation for outstanding achievement in the use of information technology to advance scholarship and teaching in the humanities; the Distinguished Service Award in 2006 from the Organization of American Historians in recognition of his contributions to enriching the understanding and appreciation of American history (the Executive Board of the OAH recently voted to rename the annual prize the Roy Rosenzweig Distinguished Service Award in recognition of his long and distinguished service to the historical profession); and the Troyer Steele Anderson Prize, which the American Historical Association awarded to him posthumously at its 2008 annual meeting.

Roy Rosenzweig left an indelible mark on the study and practice of history, democratic education, digital scholarship—and in the hearts and minds of dozens of his fellow historians, his many students, and those who had the privilege of knowing and working with him at George Mason University and in the profession. He leaves behind his devoted partner and wife, Deborah Kaplan, his mother, sister, and nephews.