Introduction to the AHA Plenary on “The Confederacy, Its Symbols, and the Politics of Public Culture,” January 7, 2016

After receiving numerous requests for a posting of my introduction to the AHA’s opening plenary session at its annual meeting in Atlanta, I’m posting the text below. I haven’t changed it to reflect the difference between something meant to be heard and something meant to be read. My column in the February issue of Perspectives on History will expand upon this brief discussion of the issues raised by that session.

Please note that it was not possible to video or audiotape the session. 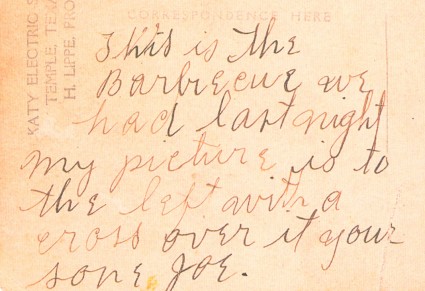 From the obverse of a photo postcard depicting the lynching of Jesse Washington. Wikimedia Commons.

100 years ago, Jesse Washington “was burned before a crowd of thousands in Waco, Texas.” Why does that resonate here? Because at the Center for Civil and Human Rights, a 15-minute walk west of this hotel, a postcard collection includes an image of Jesse Washington’s corpse. The card, which appears to have been written by a white spectator to his parents, is signed “your son Joe.” Joe refers to the event as “the Barbecue we had last night.” He identifies himself in the crowd by placing a mark in ink about his head.

This is the past. So is Stone Mountain, a half-hour drive from here. We cannot erase it by simply taking down the reminders. We must confront it. This is work of historians. This is why we are here. It would be irresponsible for historians to meet in Atlanta without talking about the presence of the past in our lives and our communities. I wish we had talked about these celebrations of a cause that deserved to be lost last time we were here, before we had to be prodded by a terrorist in Charleston, and in a very different way, by students across the country.

The AHA’s hands are by no means clean. We still have a Dunning Prize. Our journal is complicit in the legitimation of histories that have done harm. These histories have been revised, generally discarded from our syllabi and narratives. But they had reigned for a half century or more, and still command substantial respect in popular culture.

And I hope that we are becoming more responsible guests of the communities in which we hold our meetings. This means engaging these communities and their histories, respectfully but also critically. For the first time (I think) our plenary has been announced as free and open to the public. We will continue that policy in the coming years.