The theme of this year’s AHA annual meeting, held in Atlanta, was “Global Migrations: Empires, Nations, and Neighbors.” 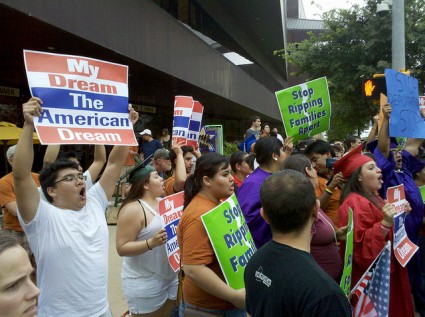 Naturally, many sessions addressed important questions in immigration history, including those of subjectivity, sovereignty, place and geography, memory, transnationalism, and student activism. Scholars revisited old themes and tackled new issues that are not only of tremendous scholarly importance, but also of great consequence to the social and political questions of our day.

The theme of transnationalism, for example, was at the center of much discussion. Lara Putnam (Univ. of Pittsburgh), whose work has been widely praised as a model of effective and meaningful transnational work, cautioned scholars to remain mindful of the central role that the local plays in larger, transnational histories, noting that even the tiniest geographical unit can, if properly investigated, reveal important historical developments (such as linguistic changes and shifting identities). At another session similarly focused on methodology, oral historian Paul Ortiz (Univ. of Florida) led a discussion on the continued challenges of doing oral histories within migrant communities and urged practitioners to consider important ethical and methodological issues: the role of the historian as co-creator; the problem of memory; the potential of technology to both aid and impair the process; the dangers inherent in interviewing vulnerable transnational subjects; and the changing nature of “the archive.” Intriguing discussions about subjectivity and historians’ role in creating and defining historical actors also emerged. For example, one session grappled with the question of whether Native Americans could—or should—be considered transnational subjects. Although the panelists did not arrive at a definitive answer, the question spurred a great deal of debate and encouraged further discussion that surely will continue to play out in our discipline’s books, journals, and classrooms.

Other sessions engaged with relatively new questions. Scholars of immigration, no doubt influenced by ongoing dialogue with the historiography of the carceral state, called for continued attention to the long history of removal, deportation, and incarceration of immigrants—a timely issue, considering that while the annual meeting was in session, raids to round up and deport large numbers of Central American individuals and families were taking place across the country and thousands of immigrants languished in private prisons without due process. 2016 also marks the 30th anniversary of the signing of the Immigration Reform and Control Act (IRCA), which as graduate student María Balandrán-Castillo (Univ. of Chicago) noted, is “remembered as a generous program,” but in fact marked a turning point in immigration history that created a vast regime of incarceration, deportation, and discrimination.

Perhaps no one understood the continued consequences of this past more intimately than the students of Freedom University, an initiative that seeks to empower and educate undocumented Georgia students banned from in-state institutions of higher learning. At a panel dedicated to these DREAMers, scholars like Laura Emiko Soltis (executive director, Freedom Univ.) and Anita Casavantes Bradford (Univ. of California, Irvine), were joined by activist and actor Charles Black and Freedom University leader Melissa Rivas-Triana. During this session, participants remembered the history of student involvement and leadership in the black civil rights movement in the 1960s and drew parallels to the struggles of undocumented students today. Calling it a “modern-day Freedom School”—which one writer and activist has described as a space “where students could ask questions about matters that interested them, such as voting and freedom rights, without being thrown out of class”—Soltis explained the need for educational reform and insisted that bans on undocumented students represent “a new form of Jim Crow in the South.”

As a graduate student in history, a formerly undocumented person, and an immigration historian, I was excited to see such convergences and intellectual cross-pollination happening everywhere: it was not difficult to see the ongoing dialogues between established and emerging historians, between the past and the present, and between old questions and new ones. The main takeaway for me, in fact, was the need to continue nurturing conversations across generational, chronological, and thematic circles. Young historians and veteran scholars, as well as specialists of diverse subfields, have much to learn from one another. Just as importantly, scholars, through ongoing interpretive dialogue, have much to contribute to present-day social and political discourses.

The exciting conversations and stimulating intellectual exchanges on immigration at the 2016 AHA annual meeting should assure attendees that historians of all stripes will continue breaking intellectual frontiers, opening up exciting new questions, and providing meaningful insights for a usable past.