The number of positions advertised with the AHA in the 2012-13 academic year dipped by 7.3 percent from the previous year, falling after two years of gains. From June 1, 2012, to May 31, 2013, the AHA posted ads for 686 job openings-an improvement over the 569 positions posted in 2009-10, but still down from the pre-recession peak of 1,064. These ads included tenured, tenure-track, adjunct, and temporary appointments, along with fellowships, positions beyond the professoriate, and other opportunities.

Our annual jobs report has become increasingly read, anticipated, and discussed as a barometer of the health of historians’ employment prospects. However, as has been pointed out by our readers, Perspectives on History and the AHA website are not the only places institutions advertise job openings for historians. This year, thanks to the generous cooperation of H-­Net, a major online advertiser of academic jobs, we are able to expand our data set, allowing for, we hope, a closer look at the performance of different segments of the job market.

This is an experiment. Merging the two data sets—­AHA ads and H-­Net ads—­required significant effort and staff time, and the other downside is that many of our old trend lines can’t be continued. But we hope the experiment will continue, as the larger sample provides a more complete picture.

During the academic year 2012–­13, H-­Net posted 322 positions (not advertised with the AHA) in history departments, historical institutions, or in other departments seeking a historian. H-­Net listed an additional 150 positions which were open to history PhDs, but which were also open to PhDs from other humanities disciplines. Including unique H-­Net ads in our total brings us to 1,008 positions that were advertised targeting historians, or 1,158 positions that were open to historians.

The totals tell only part of the story. What type of position advertised is far more significant than the total number of positions. From the larger set of 1,158 positions, we found 654 positions open at the minimum rank of assistant professor. Another 137 positions listed at the lecturer/instructor rank, and 107 postdoctoral fellowships, made it into the sample. In broad terms, this suggests a ratio of 1.7 new PhDs for every new assistant professor job—­and that includes temporary, visiting, and other non-­tenure track positions at that academic rank.

There is, however, considerable variation in job prospects for different geographic specialties (fig. 1). 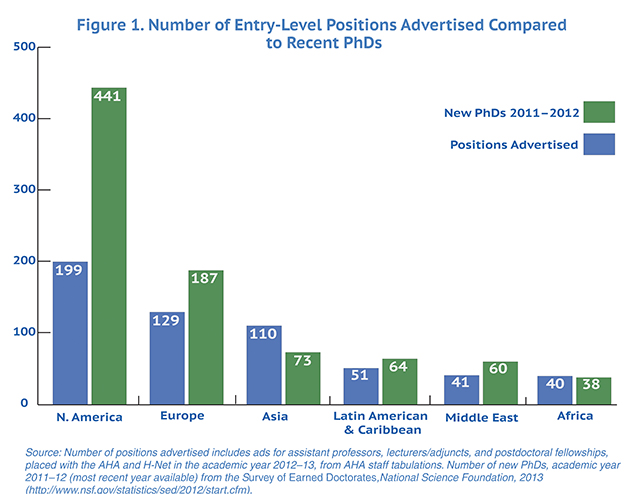 The data collected by the federal government on new PhDs uses broad categories that most historians would recognize as limiting, and without knowing the chronological focus of these dissertations, it’s difficult to accurately categorize them. But applying these same broad geographic categories to our sample of job ads (and not all of them fit into these tight constraints and had to be put aside for this comparison), we find that specialists in North America who earned a PhD in 2012–­13 likely faced a ratio of 2.2 new PhDs to every advertised entry-­level job (assistant professor, lecturer/instructor, postdoc). For Middle East specialists, the ratio was 1.5 to one; for European specialists, it was 1.4 to 1. Latin American specialists faced a ratio of 1.2 to one, while the ratio for African specialists was roughly one to one. Only specialists in Asia saw more new entry-­level positions than new graduates, by a ratio of 1.5 slots to every graduate.

A significant number of caveats apply: The data from the job ads and the data from the federal government, which breaks down graduates into specialties, are out of sync by a full year. And very few ads were so broad as to be open to geographic specialties in any chronological period (my general sense is that there was more openness to wide geographic range within specific chronologies than the other way around. There were, of course, other positions open that even the most geographically-­focused PhD could pursue. On the other hand, there were also graduates from earlier and later cohorts to compete with.

And this snapshot does not always line up with what we know about longer-­term job prospects. Comparing the ratios of advertised jobs to new PhDs for this most recent year to the longer-­term tenure-­track outcomes discovered by L. Maren Wood and Robert Townsend in their in-­depth study of 2,500 history PhDs (The Many Careers of History PhDs, available at historians.org/manycareers), it’s worth noting that only in the case of North America specialists do the outcomes suggested by the ratios above line up with the actual tenure-­track outcomes of the PhDs who earned their degrees from 1998 to 2009. For Middle Eastern specialists, the snapshot here looks somewhat worse than the long-­term picture, but for all other specialties, the snapshot actually appears to be slightly better.

One of the ongoing benefits of the Wood-­Townsend study is how it will allow us to compare graduates’ short-­term prospects to a set of long-­term outcomes. For example, we can learn from their report that the picture for North America specialists is not necessarily particular to this year’s numbers; additionally, the long-­term prospects for these historians include greater representation in the public history field and other jobs beyond the professoriate.

Despite the challenges they face on the academic job market, North America continues to be a growing choice of specialization among graduate students, according to the National Science Foundation’s Survey of Earned Doctorates (SED), even as the number of specialists in European history declines. In fact, the Middle East was the only other geographic specialty found by the SED to have fewer specialists than in the previous year—­and this decline was merely from 63 graduates in 2010–­11 to 60 in 2011–­12. But the drop in the number of PhDs in European history, to a level lower than in 2003, has contributed to a jagged trend line for “the West” as a field of study, while graduate student pursuit of histories of the East and the South have steadily increased (fig. 2). 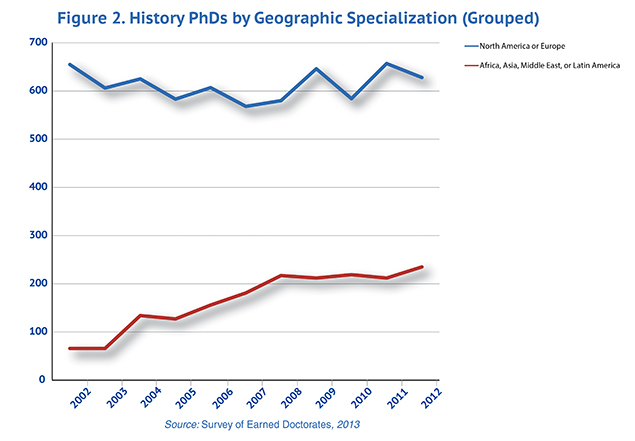 The 2012–­13 job ads featured 24 positions advertised with digital history or digital humanities as a primary specialization, and another 36 positions that listed this field as a secondary specialization. This is clearly a trend worth watching, and the expanded data set offered by including H-­Net job ads in our sample gives us a wider view of the development of this specialization.

Finally, the SED offers an assessment of graduate’s own reporting on their job prospects. Of the history PhDs who answered the question on their survey, 44 percent claimed definite postgraduation employment, and almost 13 percent claimed definite postdoctoral study. This is a very tepid improvement over the previous year. These very meager upticks, however, correspond to a year in which the AHA placed slightly more ads than in the year before. The current downturn in positions advertised raises the possibility that next year’s SED numbers will not be encouraging.

As we gather more data from a larger set of advertised positions, we want to hear from readers, employers, and job seekers on what they’d like to see in this report. As we improve our data collection, we may be able to answer more questions or pose different questions. Not everything we’d like to know is obtainable or within the realm of practicality, but as we make adjustments, we hope for input from those who use this and other AHA reports. Readers can send suggestions and feedback to amikaelian@historians.org.

—Allen Mikaelian is the editor of Perspectives on History.

Liz Townsend and Michael Pierce assisted with data collection and tabulation for this report. We would also like to thank H-­Net for making the raw data from their job ads available.