A Statistical Snapshot of History PhDs, 2004

Data collected by the National Opinion Research Center (NORC) for the most recent federal survey of earned doctorates shows a small increase in the number of historians receiving PhDs, as well as in the proportion of women and minorities receiving history PhDs in 2004.1 As we note in our survey of the academic job market published in this issue, this rise appears to be an anomaly in a larger pattern of decline since 1999.

There were 975 new history PhDs conferred in the 2003–04 academic year, up from 940 the year before, according to data collected by the NORC for five federal agencies. This increase was greater than the rise in the number of doctorates conferred in all fields. The 42,155 doctorates awarded in all fields marked a 3.5 percent increase from the year before, as compared to the 3.7 percent increase in history.

The information from the NORC survey provides the most detailed information available on the demographics of new PhDs in history, in terms of who is receiving the degree, how long they took to earn it, and what their future plans are.

One significant demographic change is that a larger proportion of women earned history degrees than at any point on record, reaching 41.5 percent of the history PhDs conferred. In real terms, the number of female history PhDs increased by almost 30 from the year before, growing from 377 to 405, while the number of male PhDs grew only by 6 (from 463 to 469).

Similarly, the proportion of minorities among the cohort of new history PhDs also hit a new high point, at 13.5 percent of the U.S. citizens receiving the degree. But once again, history lagged well behind the average for all disciplines, which is now above 20 percent.

Among the other useful (and cheering) findings in the report, NORC found a small increase in the number of students who reported they had “definite employment” at the time they received the degree. An even 53 percent of the respondents reported that they had a job, the highest proportion in 15 years.

Unfortunately, there was also a sharp increase in the number of new history doctorates reporting that they were still seeking employment when they earned the degree. The proportion of new history PhDs still on the job market rose from 26.8 percent to 33.6 percent—the highest proportion in five years.

A significant aspect of the latter change appears to come from a renewed focus on traditional academic employment. In the 2003 cohort of history PhDs, 59.5 percent of the new doctorates (a proportion that has remained virtually static for almost a decade) were looking for employment at an educational institution. In 2004 the proportion of new history PhDs looking in that direction shot up to 70.9 percent. As we note in our survey of the academic job market, despite the recent improvements only a few geographic fields are approaching equilibrium between jobs and degrees.
The NORC report also provides additional information on some of the broad trends in the field specializations of new history doctorates (Figure 1). As has been the case for almost 10 years, American history specialists comprised more than 40 percent of the new PhDs, although dipping a bit from 44.1 percent in 2003 to 41.2 percent in 2004. This drop was mirrored by an increase in European history, which rose from 20.1 percent to 22.8 percent of the new degree recipients. 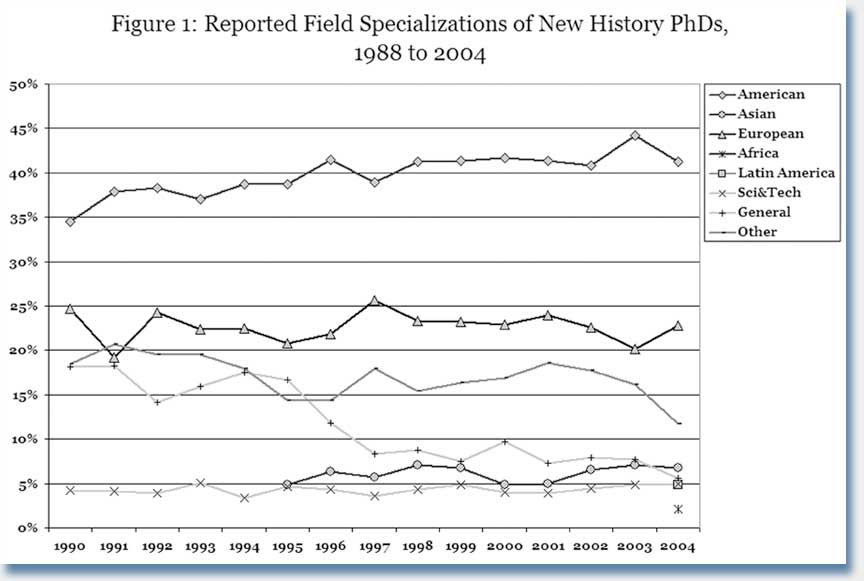 Among the remaining fields, 4.9 percent were earned in the history of science and technology while the balance were earned in broad categories of “general” (5.6 percent) or “other” history (11.7 percent).

It appears that the new cohort of history PhDs spent slightly longer earning their degree—9.7 years registered for courses after the baccalaureate degree. That can include time enrolled in pursuit of other degrees as well, so it is an imperfect measure. Nevertheless, the average increased perceptibly for the 2004 cohort, rising from 9.3 years. As a result the median age for these new history PhDs rose from 34.9 to 35.1 years.

It is important to note that to properly track new history PhDs, we have to look at three different sources of information, which report at different paces, ask different questions, and use different methods for collecting their information.

The first—with the most up-to-date information—is the list of new PhDs reported to the AHA's Directory of History Departments, Historical Organizations, and Historians, which we tabulate early in the following year and report along with the latest trends in academic jobs. While this analysis does not allow us to make cross-disciplinary assessments, it does provide an early indicator of trends and provides a snapshot of where students earned earlier degrees.

The second data set comes from the NORC report, which provides data that is more detailed, but lags a year behind the information we can report from the Directory. The NORC numbers of new PhDs tend to be about 9 percent higher than the numbers we collect, partly because the NORC collects its information directly from doctoral students when they receive their degrees, and allows them to self-select their field of study (regardless of the department in which they registered/graduated).

The third source is the Department of Education, which lags two years behind in reporting its data and collects its information directly from colleges and universities. This also provides some demographic data, though not quite as personal as in the NORC surveys, and connects the patterns in new PhDs conferred to patterns in history degrees conferred at all levels. For the latest data—from the 2002–03 academic year—see the October issue of Perspectives.