Report of the 2004 AHA Nominating Committee 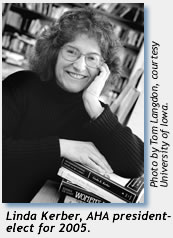 On behalf of the Nominating Committee, I am pleased to report the results of the 2004 election for AHA offices. The committee is extremely grateful to all the candidates who agreed to stand for Association elective office and committee positions despite their having other pressing obligations. The Association depends for its continued well-being upon the willingness of its members to serve. Elected candidates are indicated with an asterisk.

Of the 14,014 members of the Association, 2,475 cast ballots before the November 1 deadline, 143 fewer than last year. Fifty-five ballots postmarked after this deadline were not counted. Survey and Ballot Systems, Inc., of Eden Prairie, Minnesota, scanned the ballots and tabulated the results. Some voters registered their opinions about candidates, and the committee will review these criticisms and comments at its next meeting in February 2005.

The Nominating Committee met February 7–9, 2004, in Washington, D.C. This was the eighth year that the committee had met from Saturday to Monday. Although some telephone calls had to be made by the chair after the meeting had adjourned, this schedule allowed us to reach nominees more easily, either by telephone or by e-mail. We elected to continue the present schedule for the 2005 meeting, which is scheduled for February 5–7, 2005. The chair of the 2005 Nominating Committee is Kenneth L. Pomeranz (Univ. of California at Irvine).

The Nominating Committee continues to be committed to bringing a diversity of candidates to the AHA leadership. In the course of our deliberations, several committee members raised the concern that many recently qualified historians working in Asian, African, Middle Eastern, and Latin American history are not members of the organization despite the dynamic growth in these fields. Several factors discourage such scholars from joining, including cost, competition from alternative professional associations, and the perception that the AHA is not deemed sufficiently representative or useful to them. This failure becomes a self-perpetuating cycle, since nonmembers cannot run for an elected office of the AHA. The committee would like to encourage all scholars to consider joining early in their careers, so that the organization might become even more inclusive in the future.

The committee appreciated the thoughtful report and suggestions from the Task Force on Public History and would note that a public historian has served on the AHA Council for a number of years. Public historians also currently serve on two of the three divisions, Research and Professional.

In all its selections the committee sought to reflect the broad and growing diversity of the historical profession in terms of types of ethnicity and gender; institutions represented (high school, college, university; public or private; teaching or outreach); geographic location of institutions represented; previous and existing representation in AHA offices; specialized fields within the historical profession; and ongoing changes in the profession. No single year’s Nominating Committee could hope to achieve complete diversity; successive committees must instead build on previous efforts to achieve this goal.

The committee wishes to thank Assistant Director Sharon K. Tune for her outstanding guidance, experience and advice, without which the committee could not fulfill its responsibilities. I am also very grateful to my fellow committee members, whose collective knowledge of the profession and the Association was invaluable to the nominating process.

— Alice Conklin (Ohio State Univ.) was chair of the AHA’s Nominating Committee for 2004.