The State of the Unions

In the fall of 2021, the Student Workers of Columbia (SWC-UAW Local 2110) went on strike for 10 weeks. From November 3, 2021, to January 7, 2022, our 3,000-worker unit—made up of PhD, MA, and undergraduate student-workers employed by Columbia University—fought for, among other things, full recognition of our bargaining unit, a living wage, third-party arbitration for harassment cases, better healthcare, and increased support for parents. 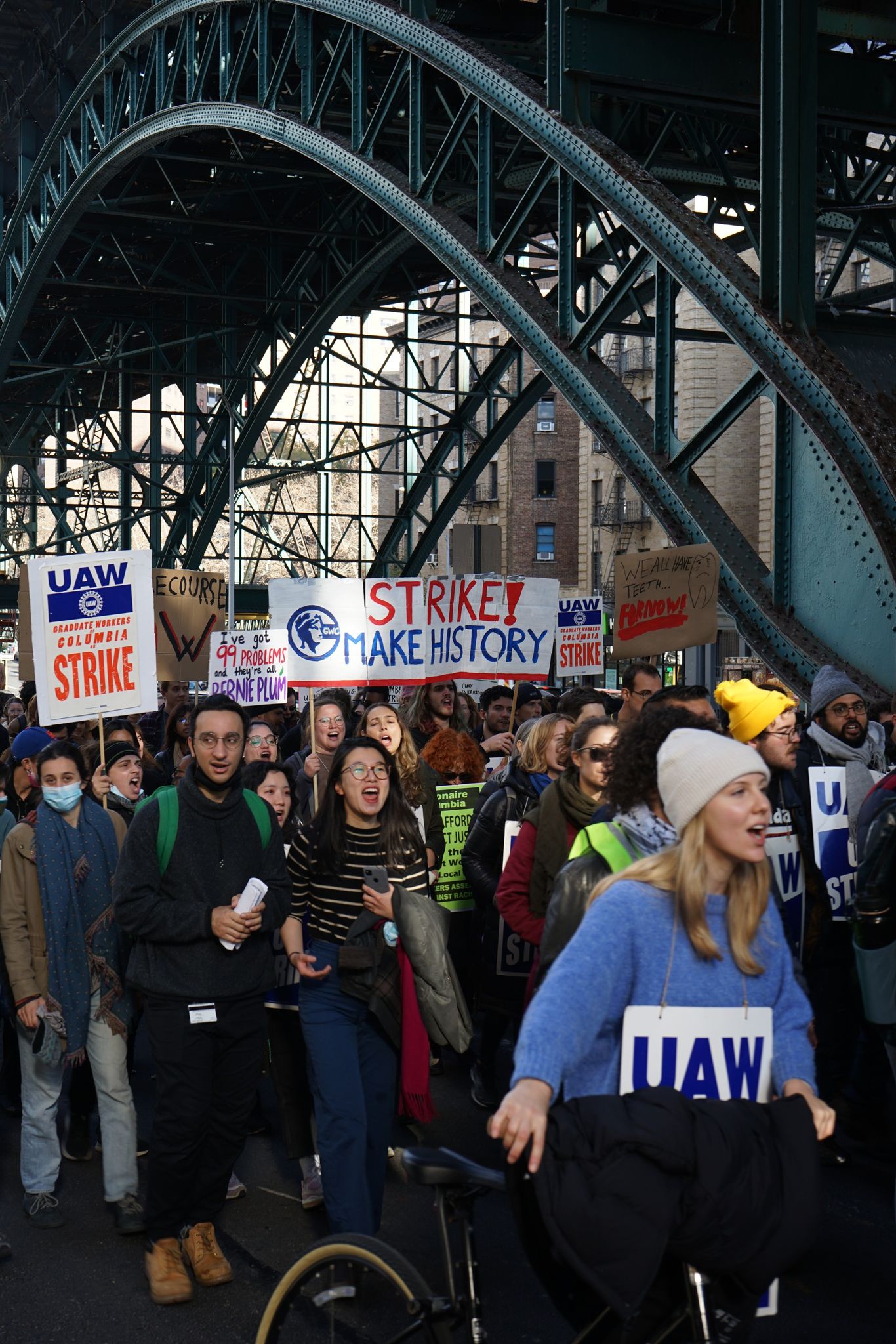 I was one of those striking workers. The tentative agreement we reached with the university on January 7 is one that we can be proud of and is unmistakably the product of a long, hard-fought strike. However, I am not writing to justify our actions or brag about our victory. Rather, I want to consider what it means to take part in this moment as a student, and, most importantly, a teacher of history.

Before the strike began on November 3, I was a teaching assistant for a Roman history survey course. In one of my discussion section’s Friday-morning meetings in October, just days after the union voted to authorize a strike, my students and I discussed the First Secession of the Plebs of 494 BCE. This was the first of five such secessions that took place in the city of Rome between the fifth and third centuries BCE. These were essentially general strikes, wherein the Roman plebs (free Romans who were not members of the patrician elite) would exit the city en masse and withhold their labor as both workers and soldiers in response to poor living and working conditions; the catalyst for the First Secession was primarily debt bondage. The Secessions of the Plebs were, on the whole, effective at winning social and political change. The First Secession resulted in debt relief and, notably, the establishment of the Tribune of the Plebs, the first plebeian governmental body. As such, it is an important event in understanding the rise of the plebeian assemblies and the distribution of power across social class within the early Roman Republic.

Students drew a connection between the secession and the strike authorization vote that had closed only days earlier.

Together, my students and I read the historian Livy’s (d. 17 CE) account carefully, applying rigorous historical analysis to the problematic but fruitful genre of Roman histories. A recurring point was that Livy’s account makes clear the power of the secession as a form of collective action. My students highlighted in particular his references to the plebs holding “nightly meetings” after the appointment of new consuls in 494 BCE, “lest if they met in the Forum they might be frightened into adopting ill-considered measures, and manage their business rashly and at haphazard” (Livy II.28). Even so, Livy condemns these meetings as a “mischievous practice” and the secessions for causing food shortages due to “failure to cultivate the fields during the withdrawal of the Plebs” (Livy II.34). My students argued that this was the powerful blaming the powerless for demanding change. Students also drew a connection between the secession and the Columbia strike authorization vote that had closed only days earlier. It was at this point that I told them that I would likely be going on strike later in the semester, and they understood what that meant and why I had to do it.

Once the strike began, my students sent me an outpouring of support. Some joined the picket line; others brought food (including homemade cookies!) when Columbia withheld our stipends as well as our wages. Several colleagues held alternative discussion sections with their students on the picket line, where they applied the techniques of close reading to the administration’s emails about the strike. Indeed, undergraduates were exceptionally proficient at reading between the lines of university communications. Standing in the heart of campus, one could overhear snippets of conversations between undergraduates skeptical of the latest email from the Office of the Provost.

This constant critical eye, however, was not universal on campus. For much of the strike, many tenured faculty across the university, as well as scabbing student-workers, were all too willing to take university communications about the strike nearly at face value. It was disheartening, as a graduate student in history, to see some of the very people training myself and my colleagues to read historical evidence against the grain not apply the same amount of rigor to communications from contemporary authorities, including our multibillion-dollar institution.

Long after my students have forgotten the minutiae of early Roman political history, they will remember the student worker strike.

In my classroom, I have tried to show my students that none of us are immune to history. To be a student and practitioner of history is to understand the relationship between individual actors and their broader context. That imperative does not stop when our attention crosses the ever-moving threshold and steps into the present, despite the pernicious persistence on “scientific distance” within some corners of the discipline of history.

As a consequence, striking is one of the most powerful pedagogical choices I could have made. Long after my students have forgotten the minutiae of early Roman political history, they will remember the student worker strike. Or perhaps they will remember the Secessions of the Plebs when they think of the moment the labor movement is currently having in the United States. Most importantly, my experience in the strike illustrated the power of the study of history to inspire empathy with people of both past and present. My students’ engagement with the strike gives me hope for the future of our discipline, especially as a premodernist. Course offerings in ancient and medieval history are growing thinner and thinner at so many American universities, in no small part due to claims of “irrelevance;” this experience offers a powerful counterpoint. For many of my students, taking a Roman history course became central to their thoughts about the strike. Thinking with the premodern past gave them tools to be engaged members of their campus community during a time of crisis. I can think of no better pedagogical aim for our discipline.

Charles Steinman is a PhD student at Columbia University. He tweets @charsteinman.