I am from Cincinnati, a town on the Ohio River; Ohio is an Iroquoian word that translates as “beautiful river” or “great river.” In January 1977, the day after I turned seven years old, the Ohio River froze to a depth of 12 inches. The chill extended into a 28-day stretch of below-zero temperatures with a low of −25°F. My father took me and my little sister Erin down to the river and took this photograph of us on the ice, saying he wanted us to walk on the water in case the chance never came again. His prediction was borne out: 1977 and 1978 were two years among the 14 times, out of 126 winters on record (since scientific recording began in 1874), that the Ohio River froze. I still recall my trepidation and exhilaration at stepping onto the mighty Ohio, transformed into a crystal sheet beneath my boots. 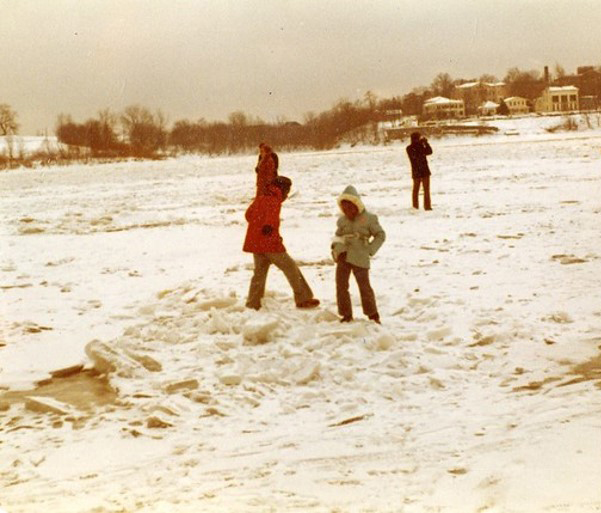 In the 1970s, the freezing of the Ohio River was a rare event. In the mid-19th century, it was not so uncommon. The river’s interesting natural history raises questions about the role of nature in social and political history. Could the state of this river have affected the national debate about slavery prior to the Civil War?

Stories, both factual and fictional, of enslaved people escaping over the river’s ice in the 1850s heightened social, political, and economic pressure on the system of slavery, as well as exposed the weakness of the ideological justifications for it. Eliza Harris, a woman later fictionalized in Harriet Beecher Stowe’s Uncle Tom’s Cabin, traversed the frozen Ohio River in her bid for freedom in the 1850s. But it is Margaret Garner who is perhaps best known for crossing the river, in part because her experience served as inspiration for Toni Morrison’s novel Beloved.

Garner’s story is a particularly revealing way into the exploration of these ideas. At age 22, she was pregnant and the mother of four children, likely fathered by both her enslaved husband, Robert Garner, and her owner, Archibald Gaines. On January 28, 1856, a freezing cold day in Kentucky, Margaret and Robert fled in the company of their children and Robert’s parents. The Ohio River was frozen over, permitting them to cross on foot over what abolitionist newspapers the Anti-slavery Standard and the Liberator described as an “ice bridge” or a “winter bridge.” Nine others also escaped that night in what the Chicago Tribune disparagingly called a “stampede of slaves.” Following a tragedy in which Garner killed one of her children rather than permitting the child’s return to captivity, Gaines seized the Garners under the authority of the Fugitive Slave Law of 1850 and sold them into the Deep South. Abolitionists were incensed and activated by the outcome. After this heartbreaking episode, Frances Ellen Watkins Harper composed her poem “The Slave Mother: A Tale of the Ohio” (1857), which poignantly describes Margaret Garner approaching the river “bridged and spanned with ice.”

Rutherford B. Hayes told an interviewer in 1893 that, in the winters of 1850–53, 1855, and 1856, “the river was frozen over and crossing made everywhere practicable near Ripley and Cincinnati,” noting that this was “soon after the fugitive slave law” had passed. The repeated freezing of the waterway after that crucial turning point enabled enslaved people to escape. Their stories, reported in newspapers and fictionalized, made up an important component of the public discourse in advance of the US Civil War. It would seem that the frozen Ohio did act its part in this great national and human drama.

Editor's Note: This article originally misidentified the origin of the name for Cincinnati. Ohio, not Cincinnati, is "named for an Iroquoian word translated as 'beautiful river' or 'great river.'"

Tiya Miles is professor of history at Harvard University and Radcliffe Alumnae Professor at the Harvard Radcliffe Institute. Her current book project, Trail Ready: The Little-Known History of Girls Outdoors, is underway for W. W. Norton. She tweets @TiyaMilesTAM.