A Pardon for Homer Plessy

The Long Arc of “Pernicious” Jurisprudence

The red brick buildings at 2800 Chartres Street in New Orleans were constructed in the early 19th century to store and press cotton—cotton planted, cultivated, and picked by enslaved Black children, men, and women. On January 5, 2022, more than a hundred people gathered in the courtyard of the Chartres St. complex, now home to the New Orleans Center for Creative Arts (NOCCA). They had come to witness a ceremony that Louisiana Governor John Bel Edwards acknowledged “should never have had to happen”—the signing of a posthumous pardon for Homer Plessy, a shoemaker arrested in June 1892 for violating the Separate Car Act of 1890, the law requiring all Louisiana passenger railways to maintain separate train cars for Black and white Americans.

Train cars, visible that morning through an archway between NOCCA buildings, signaled the continuity of place and space and the rhetorical impact of material culture on historical commemoration. We were welcomed by NOCCA’s president, whose desk sits in what was once the ticket office where the light-skinned Plessy purchased first-class passage to Covington, 40 miles to the north. Plessy never got close. In a carefully orchestrated confrontation only blocks from the station, a conductor asked whether he was “colored.” When Plessy said yes, the conductor ordered him to change cars. Plessy refused, the train stopped, and he was arrested.

Plessy was not a naive traveler ensnared by the web of the Jim Crow legal regime. He was a member of the Comité des Citoyens, formed specifically to test the new segregation laws. The railroad company cooperated with the scheme; the Separate Car Act complicated business operations. Plessy’s claim had firm legal footing in the 14th Amendment (he also invoked the 13th), but Louisiana judge John Howard Ferguson invoked a states’ rights doctrine that entitled Louisiana to regulate business within its jurisdiction. When his case reached the Supreme Court, explained legal historian Angela Allen-Bell at the pardon event, Plessy “did not lose because his interpretation of the US Constitution was unsound. He lost because the nation’s commitment to white supremacy was greater than its commitment to the aims of Reconstruction or to the promises of the United States Constitution.”

Institutional continuity was made even more poignant at the ceremony by the spate of legislation recently introduced in more than 30 states seeking to undermine teachers’ ability to explore the continuing legacy of slavery, segregation, and institutional racism. Orleans Parish District Attorney Jason Williams emphasized that the request to pardon Plessy was drawn up by the same agency that had unjustly prosecuted him in the first place—a moral and ethical obligation. Gov. Edwards amplified that tone, drawing on Supreme Court Justice John Marshall Harlan’s stinging dissent, which emphasized the role played by the state of Louisiana in creating and enforcing a “pernicious” law. Dwelling on “pernicious,” Gov. Edwards placed deliberate emphasis on “our state,” pointing to himself as he spoke and leaving little doubt that “we” were responsible for what happened in the 1890s. “This happened in our state,” and “we are not where we should be” today. “The pernicious effects of Plessy linger still,” and there is work to do: “The stroke of my pen on this pardon, while momentous, it doesn’t erase generations of pain and discrimination. It doesn’t eradicate all the wrongs wrought by the Plessy court or fix all of our present challenges.”

“This pardon, while momentous, it doesn’t erase all the wrongs done by generations.”

I am not certain whether Edwards’s words would skirt the boundaries of permissibility in states that have passed “divisive concepts” legislation discouraging—even prohibiting—teachers from suggesting just this kind of continuity of historical responsibility. Williams’s reference to contemporary implications of the “stain of immorality on our state’s history” would undoubtably cross the line, as would his observation that to “correct the sins of the past we must acknowledge my predecessors’ roles in committing those sins.” The law matters, Williams argued; by enshrining slavery and then segregation in law, Louisiana had created an edifice whose legacy remains readily discernible in contemporary legislation and social practice. The Supreme Court’s approval of this law and others like it, observed Allen-Bell, “etched the seal of legality on a system of social degradation.”

If this all sounds rather bleak for a sunny morning in New Orleans, it is worth noting how the ceremony opened. At 10:30 a.m., a cellist played the opening notes of “Lift Every Voice and Sing”—known to many Americans as the Black National Anthem—with the audience accompanying her:

The cellist was Kate Dillingham, great-great-granddaughter of Justice Harlan. Joining Gov. Edwards on stage were Keith Plessy and Phoebe Ferguson—descendants, respectively, of the defendant and of the criminal court judge who affirmed the legality of Louisiana’s Separate Car Act. From the moment the ceremony began, a distinct feeling emerged: a sense of how major historical events can be personified through descent, through family connections over time. 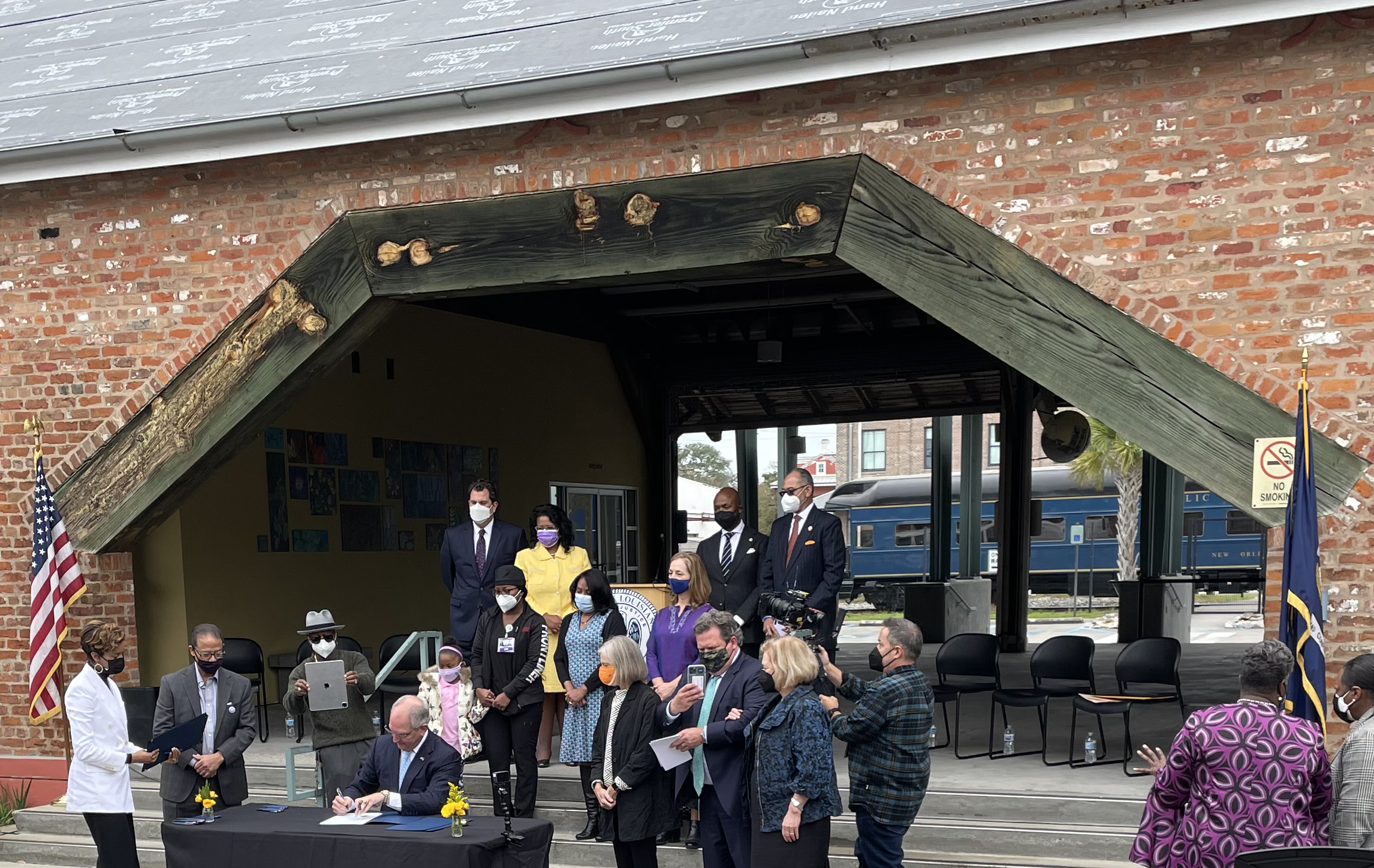 In their remarks at January’s pardon ceremony, complemented by additional conversation at an AHA annual meeting session three days later, Plessy and Ferguson—who clearly relish having revised the “versus” that bound their names to “and”—explained how history can provide a basis for change. After first meeting an event tied to the publication of historian Keith Weldon Medley’s We as Freemen: Plessy v. Ferguson (2003), conversation led to friendship, to trust, and eventually to the establishment of the Plessy and Ferguson Foundation. At the AHA session, they expanded upon the work the foundation does in schools, and it became clear—especially during the Q&A—that Phoebe Ferguson has encountered resistance among white students, particularly male students, when she describes her apology to Keith for her family’s role in the legacy of slavery and segregation. But the apology is essential, she argued: it personalizes history and implements the foundation’s intent that “their mutual history can be a tool to create unity and understanding.”

Banning that apology from classrooms via “divisive concepts” legislation is not only a fool’s errand but a faithless one. “Sing a song full of the faith that the dark past has taught us.” We cannot sing what we will not learn.