A Conversational Shift? Career Diversity Flourishes at the 2016 Annual Meeting

As the low buzz in the hotel ballroom shortly after lunchtime grew to animated conversation throughout the afternoon, it became clear that the third annual AHA Career Fair captured the energy of the Association’s Career Diversity for Historians initiative. In addition to the Career Fair, annual meeting highlights included the Graduate and Early Career Committee (GECC) Open Forum, focused this year on Career Diversity, and the Job Workshop for Historians, organized annually by the AHA’s Professional Division. A year and a half into the Career Diversity initiative, the 2016 annual meeting provided much anecdotal evidence that the conversation about careers for history PhDs is shifting. 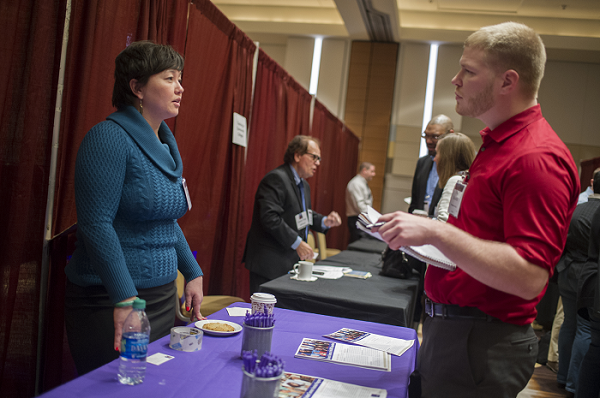 The Career Fair’s 140 enthusiastic participants swamped the tables, which hosted advisers representing a range of employers: nonprofits, startups, the federal government, private corporations, and more. Job seekers packed the aisles; advisers reported being talked off their feet as they provided career path advice and informational interviews about their work. A new highlight this year, Ask an Assistant Professor, featured a rotating cadre of academics staffing a booth to demystify their work life, on and off the tenure track. A small army of volunteer assistant professors—aiming to “make the process suck a little bit less,” as one said—contributed in no small part to the new feature’s success. Additionally, as a response to requests from Career Fair attendees in previous years, the AHA provided more structure by scheduling small breakout sessions, led by Jennifer Polk of FromPhDtoLife.com. One session, “Networking: What It Is and How to Do It,” fostered lively discussion, as participants shared common networking fears and discovered unexpected ways to make connections.

At the GECC Open Forum, graduate students learned more about Career Diversity, especially the initiative’s four pilot sites, and thought about how to enact similar programming in their own departments. Anna Krome-Lukens, lecturer in history and director of experiential education in public policy at the University of North Carolina at Chapel Hill, described the conversation as dynamic, ranging from calls for necessary (and challenging) structural change to practical tips for navigating graduate and postgraduate career changes. She also observed shifts in attitude that can make looking for a job within and beyond the professoriate a little less stressful. Krome-Lukens emphasized some post-PhD advice from Karen Wilson, graduate career officer at UCLA: “We don’t have any control over jobs or job markets. But we do have control over our preparation for whatever job market we choose, so take charge of your own professional development.”

The Job Workshop for Historians likewise showed a shift in perspective. Job seekers today seem less likely to focus exclusively on academic employment. Cultural institutions, startups, and nonprofits “seemed to garner the most interest and sustained enthusiasm from job seekers,” observed first-time participant Jennifer McPherson, a PhD candidate at the University of New Mexico and project assistant for the Career Diversity pilot program there. Philippa Levine, vice president of the AHA Professional Division, described the widening of job seekers’ interests as a “sea change.” The continued success of the workshop, she said, will lead the Professional Division to continue to “offer job seekers, at various stages of their work, insight into a considerable range of career opp vortunities, from nonprofit organization work, museum curating, and academic administration to the many different kinds of faculty positions.”

Find out more at historians.org/careerdiversity. Is there a conversation about Career Diversity you’d like to have? Propose it for the 2017 annual meeting in Denver!. 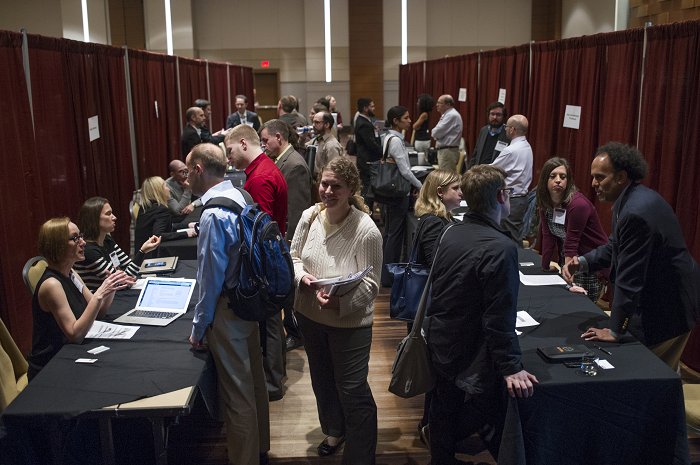 Conversations about careers continued in individual sessions. Two panels, “What I Do: How Can I Be a Historian in This Job?” and “Where I Work: Historians and Their Institutions,” brought together history PhDs from a variety of industries to talk about their work inside and outside the academy. Perspectives on History editor Allison Miller, a “What I Do” panelist, reported that the conversation was frank and positive, as attendees reflected the widespread curiosity about careers beyond the professoriate at this annual meeting. “Where I Work” panelists highlighted ways that doctoral training in history can be an asset in careers outside of academia. Spencer Crew, former president of the National Museum of American History and of the National Underground Railroad Museum, revealed that his historical training helped him bring a nuanced approach to relationships with the press and the boards of organizations he headed. With years of expertise in educational consulting, Meaghan Duff noted that understanding early American institutions helped her comprehend how institutional change happens, and to resist ideas that CEO-level, top-down shifts are all that matter. Finally, Lynn Weiner discussed her years as a university historian and academic administrator, observing that historical thinking is crucial to success in administration: historians know that the present shares a relationship with the past, that old problems have a way of resurfacing.

A noticeable shift in tone accompanied the steadily growing interest in career-preparation programming at the annual meeting. GECC Open Forum panelists Karen Wilson and Lindsey Martin put their fingers on the transition. As Wilson wrote in an e-mail, “I noticed career diversity conversations are shifting some from destinations (i.e., jobs history PhDs hold or could hold) to process (i.e., how does one prepare for a particular job or a variety of paths?).” Martin, Mellon career development officer at the University of Chicago, noticed a similar trend: “Discussions between many students moved seamlessly between dissertation research and projects like podcasting, blogging, and tweeting.” She interpreted “the fluidity of these conversations” as a sign that “traditional boundaries about what constitutes ‘academic’ and ‘nonacademic’ scholarship are irrelevant in the minds of many graduate students, who instead find themselves increasingly curious and creative about how they convey their research and communicate stories about the past.” Similarly, Caroline Marris, graduate co-coordinator for History in Action at Columbia, said that not only was there more “fluidity” at the annual meeting, there was also a sense of the relationship between learning new skills and doctoral training. “Engaging in different types of work—from digital projects to nonacademic internships—proved to them that they were more capable historians,” she explained, “and certainly more capable professionals (and professors are professionals too!) than they might have been if they had remained strictly within academia.”

As historians, we must recognize that these stories may well represent only one side of the story—those against or ambivalent about a variegated career search for history PhDs likely did not attend these events. Still, there is evidence of change afoot, signs that furtive discussions and sub rosa channels for advice are emerging from the shadows. And that is to the good. Our discipline teaches us that cultural change is slow and sometimes fitful, but we are also well poised to navigate and influence it. The future of the discipline depends on it.

Emily Swafford is manager of academic affairs at the AHA. She tweets @elswafford.