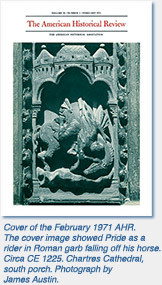 It is exactly 40 years since the AHR adopted its signature glossy white cover and accompanying image. The first such image was of a 13th-century sculpture of “Pride as a falling rider” from Chartres Cathedral, which accompanied an article on social change and the vices in Latin Christendom. The content of the journal has changed a good deal in the intervening years. The articles in the February 1971 issue dealt exclusively with Europe and America. The topics in the February 2011 issue, in contrast, while not ignoring the West, also span precolonial Southern Africa, nineteenth-century Bhopal, Middle Eastern diasporic Jewry, and the socialist bloc from Central Europe to China.

The signature cover design, however, has not changed. We mark the 40th anniversary with a new, streamlined web site which pays homage to that design, along with an AHR Facebook page. Use either online venue to find out what is in the latest issue and other AHR news, and recommend them to your colleagues and students.

Since 1903, the first issue of the year has contained the AHA Presidential Address. In “Islam and Power in Colonial India: The Making and Unmaking of a Muslim Princess,” AHA President Barbara Metcalf explores the late 19th-century history of a female ruler of Bhopal, Shah Jahan Begum, and her intellectual male consort, Siddiq Hasan Khan. This history serves to highlight the nuances and novelties of “Islamization” as well as the reformist possibilities for female rulers and their subjects. But as the mistaken apprehension of colonial British officials suggests, outsiders often misinterpret overt Islamic behavior.

In “Barbarians Ancient and Modern,” Norman Etherington explores two strangely parallel debates. Historians have discussed precolonial wars and migrations in Southern Africa and the barbarian invasions and movements of the later Roman Empire in peculiarly similar terms. Yet in each case the participants in the one controversy have not been aware of the other. Their parallel courses are rooted in the intellectual development of postwar Europe, contemporary ethnic nationalisms, and larger trends in historiography. Following the general course of the debates, Etherington exposes the origins of flawed knowledge about precolonial societies of Southern Africa in Western classical scholarship, suggesting that lessons learned in the debate on the so-called mfecane in Southern Africa may clarify discussions of barbarian identities and impacts in late antiquity, and of more recent nationalisms and ethnicities.

Samuel Moyn exhumes “The First Historian of Human Rights.” The first attempt by a professional historian to place the Universal Declaration of Human Rights of 1948 in a historical lineage was offered by a German conservative, Gerhard Ritter, in that same year. No American historian thought of doing so until 50 years later. Recent work tends to present a teleological and triumphalist credentialing narrative about the development of human rights. Ritter’s agenda is alien to this easy characterization and points to the conservative and religious sources of human rights in the 1940s. With Barack Obama having revived Ritter’s “Christian realism” as his own foreign policy philosophy, the first history of human rights remains surprisingly relevant today.

In “Protected Persons? The Baghdadi Jewish Diaspora, the British State, and the Persistence of Empire,” Sarah Abrevaya Stein uses the battle over the fortune of one Silas Aaron Hardoon to explore issues that reverberated through the early 20th-century Baghdadi, Mediterranean, and Middle Eastern Jewish diasporas. The legal battle illustrates the various way in which Middle Eastern Jews negotiated the transition from imperial to national and informal colonial regimes.

“The Soviet State as Imperial Scavenger: ‘Catch Up and Surpass’ in the Transnational Socialist Bloc, 1950–1960” explores how the elite of the 1950s Soviet state surveyed the socialist bloc for forms of expertise, technology, and industrial organization that might be useful to the Soviet economy. As Austin Jersild analyzes, the goals of Soviet “imperial scavenging” were remarkably consistent, but with diverse consequences for the vast contiguous bloc that stretched from Central Europe to China.

The April 2011 issue of the AHR will include a forum on the history of the five senses as well as an article on narcotics trafficking in the Middle East and territorialization. 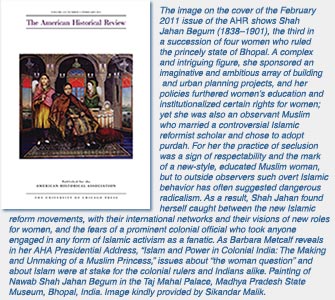