The 122nd Annual Meeting: Some Snapshots from AHA Today 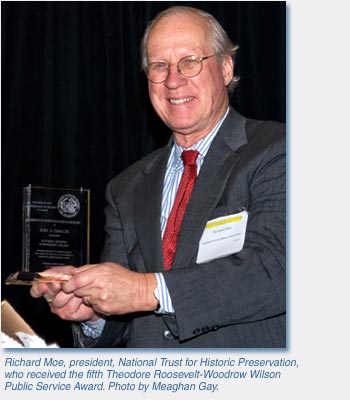 Editor's Note: During the 122nd Annual Meeting of the AHA held January 3–6, 2008, in Washington, D.C., staff of the AHA kept readers of the AHA's blog (AHA Today) up-to-date with blog posts on sessions, events, and what to do in D.C. Each morning of the annual meeting, the blog featured an overview of the day's events, with links to the online Program, and in the evenings there were posts on some of the main events. Here, for the benefit of members who missed the meeting—and for those who may not have read the blog posts—we provide adapted extracts from the blog as well as additional material relating to the annual meeting.

Opening of the 122nd Annual Meeting

Barbara Weinstein, president of the American Historical Association, began the 122nd annual meeting by presenting Richard Moe, president of the National Trust for Historic Preservation, with the AHA's Theodore Roosevelt-Woodrow Wilson Public Service Award. This award is given "to honor a public figure or other civil servant who has made extraordinary contributions to the study, teaching, and public understanding of history." Theodore Roosevelt and Woodrow Wilson were historians who served both as presidents of the United States and as presidents of the American Historical Association.

Richard Moe has led the National Trust for Historic Preservation for the last 14 years, strengthening it as a preservation organization in the United States and internationally. One of his most recent projects with the NTHP is the restoration of President Lincoln's Cottage at the Soliders' Home in Washington, D.C. It was Lincoln's "Camp David" and offers a unique insight into Lincoln's life. Moe remarked that history and preservation are two sides of the same coin, explaining that "History tells you what happened and preservation tells you it happened here." 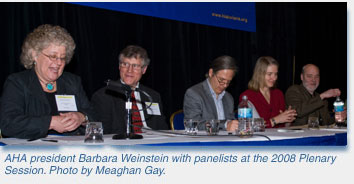 The Plenary session, "Searching for the Sounds of the Nation: Music, Race, and National Identities in the United States and Brazil," followed the presentation of the award and explored the topics of race and identity through the lens of music. Two of the speakers focused on musicologists, with William Ferris of the University of North Carolina at Chapel Hill looking at the life and work of Alan Lomax in the United States, and Carlos Sandroni of the Universidade Federal De Paraiba examining Brazilian musicologist Mario de Andrade. Ronald M. Randano of the University of Wisconsin-Madison chose to center his discussion not on one individual but rather on the idea of "authenticity" in black music. Three commentators (Jerma Jackson, Ingrid Monson, and Shane White) further delved into the topics of race and identity, raising a number of questions that could further the conversation.

Advocacy and public policy are topics that many historians don't pay much attention to. At this annual meeting, however, several sessions were devoted to various facets of these topics, ranging from discussions of presidential records to visa restrictions and their impact on historical research. For example, among the dozens of sessions held on Friday, January 4, 2008, was a unique panel on "Historians, Advocacy, and Public Policy." This session focused on a topic: advocacy. Both sides of the advocacy process were examined at this session, beginning with John Lawrence, Chief of Staff for Speaker of the House Nancy Pelosi, who offered the perspective of one inside the legislature. He has worked on Capitol Hill for over thirty years, and noted that his PhD in American History from Berkeley and his training as a historian has offered him a "unique perspective." In his talk he urged that "we all need to take renewed action to support the study of history," and he pointed to importance of the Teaching American History grant program and National History Day, and how both programs continue to fight each year for funding.

The three speakers who followed John Lawrence offered the other side of the coin, the lobbyist's point of view, and included Jamil Zainaldin, president of the Georgia Humanities Council; Lee White, director of the National History Coalition; and Jessica Irons, director of the National Humanities Alliance. Zainaldin spoke about the obstacles to advocacy at the state level, pointing to the disconnect between historical institutions and organizations and how that separation makes it difficult to "isolate specific historical policies" and have them addressed at the state level. Lee White emphasized how important access to records is and noted the NHC's efforts to overturn Executive Order 13233, a frighteningly restrictive order "which gave current and former presidents and vice presidents broad authority to withhold presidential records or delay their release indefinitely". He went on to encourage historians to take a more active role in what goes on in D.C., to make sure issues of interest to the history and archival professions don't fall through the cracks. Jessica Irons wrapped up the session with some specific ways historians can take a part in advocacy, including: picking candidates who value history programs, keeping representatives informed of your concerns (this can be easily done through action alerts and sites like the Humanities Advocacy Network), following up with representatives when they take action, and coming to D.C. to lobby Congress (like on Humanities Advocacy Day, part of the NHA conference).

At the 122nd General Meeting, held on Friday night at the Marriott Wardman Park at 8:30 p.m., AHA president-elect Gabrielle Spiegel presented the AHA's prize and award winners for 2007. This group included 16 book prizes, three awards for scholarly distinction, one honorary foreign member, and more. The complete list of the award winners is available at http://blog.historians.org.

Following the award presentation, President Barbara Weinstein delivered her presidential address, titled "Developing Inequality," in which she called for a return to considerations of the "developmental paradigm" in historical analysis, but without reverting to what she termed were "discredited discourses of modernization and progress." Focusing on the unequal developments in Brazil, especially in the state of Sao Paulo, Weinstein presented a compelling critique of current scholarship while providing guideposts for future research.

Digital History at the Annual Meeting

Several sessions at the annual meeting focused on the numerous ways in which historians can draw upon new technologies. A poster session-like gathering on Friday morning, for instance, entitled "Tech Tools for Historians," presented, through laptops and informal conversation, glimpses into the technical arts of the possible. A large crowd learned about such varied applications as Zotero, an online research tool that collects and manages research sources, and Omeka, "a free, open-source, standards-based, easy-to-use web publishing platform," as well as Web projects such as "Making the History of 1989" and federated searches.

In "Learning Digitally: New Resources for History Teachers and Researchers," a session that used a more traditional format, presenters walked the audience through their online exhibits, collections, and projects. Among these was the online exhibit, "Gulag: Many Days, Many Lives," in which visitors will be randomly assigned a prisoner's identity from the Gulag upon entry, and will learn more about their assigned prisoner's life as they explore the site, while also getting an overview about the Soviet gulags. The session also featured a Library of Congress project, "Meeting of Frontiers," which is online in both English and Russian.

"From Dusty to Digital: New Historical Archives of the Twenty-First Century," a Sunday morning session, was devoted to presentations about new collections of historical resources that are available online, such as Aluka, a digital library of scholarly resources from and about Africa; Digital Durham, which has a collection of historical materials and teacher resources for post-Civil War Durham, North Carolina; Rotunda, the University of Virginia's project to provide original digital scholarship as well as digitized critical and documentary works in the humanities and social sciences; and a University of North Carolina at Chapel Hill site for documenting the American South, which includes a large collections of slave narratives.

A key feature of every annual meeting is the annual business meeting. Though not always well-attended (and this year was no exception), this meeting is the Association's meeting of record, where the various formal reports are presented and important policy decisions are made or are articulated. In her report, Executive Director Arnita A. Jones pointed out that the Association was financially sound and that membership was growing. She also noted that 5,449 historians attended the 122nd annual meeting. After presentations of reports by the vice presidents of the three divisions, the editor of the American Historical Review, and the chair of the Nominating Committee for 2007 (in absentia), the meeting took up for consideration the amendment of the AHA's constitution. Members present gave their unanimous consent to the proposed amendments, which had earlier been circulated to AHA members through Perspectives and a special web forum. (The amended constitution, with the advisory approval of the business meeting, and that of the Council, has now been presented for a vote by the membership). The business meeting concluded with the president, Barbara Weinstein, handing over the AHA's gavel to president-elect Gabrielle Spiegel, who thereupon declared the meeting closed.

The AHA's Council traditionally meets in two sessions during the annual meeting. At its meetings this year, the Council reached several important decisions, including the approval of the amended AHA constitution and referring it to the membership; new guidelines for affiliation of societies to the AHA; admitting the Society for the History of Children and Youth as an affiliated society; and approving a new mission statement for the Professional Division. A list of the key decisions of the Council will be printed in the March 2008 issue of Perspectives on History.