In the February Issue of the AHR 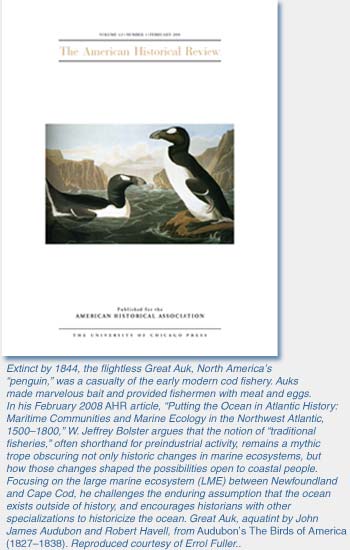 The February 2008 issue of the American Historical Review should be arriving in members' mailboxes very soon. Like other recent issues, this one has a pronounced transnational flavor. The articles take us from the Atlantic World in the early modern period, to New York and Madras in the 18th century, and finally to the presence and work of French missionaries in China in modern times. The review essay offers a tour of the literature on historical archaeology. Six Featured Review pieces and our usual book review section make up the balance of the issue. Here is a summary look at the five articles:

As is traditional, the February issue leads with the presidential address. Barbara Weinstein's "Developing Inequality," challenges historians to consider what she sees as the unfortunate consequences of abandoning the "developmental paradigm" in historical analysis. Much of her article offers a case study of the disparities of wealth in the state of San Paulo, Brazil, in which she combines economic and political history with discourse analysis to explain the deep-seated and persistent inequalities that have marked the region. Her address, part critique, part analysis, is a provocative statement with implications for all contemporary historians.

In "Putting the Ocean in Atlantic History: Maritime Communities and Marine Ecology in the Northwest Atlantic, 1500–1800" by W. Jeffrey Bolster asks us to think of oceans as living, historical entities. The article depicts the Atlantic as a single oceanic unit, a huge bioregion differentiated by historically specific human activities in various subregions and describes the multiple transformations that marked this large marine ecosystem in the early modern period.

In "Before Race Mattered: Geographies of the Color Line in Early Colonial Madras and New York" by Carl H. Nightingale also takes an Atlantic perspective, but combines it with insights from Indian Ocean history. His focus is the development of color lines in colonial Madras, India, the first city with separate sections officially named "White Town" and "Black Town," and New York City, where black slaves were forced to live in the houses of their white masters.

Henrietta Harrison, in "'A Penny for the Little Chinese': The Holy Childhood Association in China, 1843–1951," looks at this French charity as an early example of a transnational aid organization and discusses the impact of such globalizing institutions on the local cultures in which they operate. Although the problem of child abandonment was serious problem in both France and China, the work of the Holy Childhood bore very different results and meanings in both context.

Finally, in the review essay, "On the Edges of History: Reflections on Historical Archaeology," Alan Mayne discusses the international development of historical archaeology, explains its overlaps with history, and assesses its contributions to crossdisciplinary historical analysis. He argues that historical anthropology should be recognized and utilized by more historians, for it provides a firm basis for a transdisciplinary analysis of the past.

An AHR open forum held in January during the AHA annual meeting in Washington, D.C., to allow members to meet the editors and staff of the AHR, drew a standing room only crowd. Most in attendance were interested in learning just how the journal works—how we review articles, what kinds of submissions we prefer, what distinguishes an "AHR" article from other very good work. Clearly there is a need for more disclosure and transparency concerning what goes into the journal and how it gets there. Accordingly, in a future essay in Perspectives on History, I will discuss the these and other basic aspects of the editorial process. Stay tuned.

—Robert Schneider (Indiana Univ.) is editor of the American Historical Review. He can be reached at raschnei@Indiana.edu.