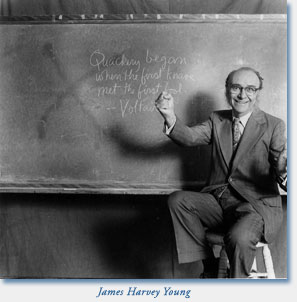 James Harvey Young, who pioneered historical scholarship in the field of patent medicines and quackery and the regulation of food and drugs in the United States, died July 29, 2006, at age 90, from complications of a stroke.

Born September 8, 1915, in Brooklyn, NY, James Harvey Young was the eldest of the four children of Rev. William Harvey Young and Blanche DeBra Young. During his childhood, the family lived primarily in Indiana and Illinois. In 1937, he took his BA degree at Knox College, graduating Phi Beta Kappa. In 1938, he received the MA degree and in 1941, the PhD degree, both in history from the University of Illinois.

Young spent his entire career at Emory University. He rose from instructor in 1941 to become the Charles Howard Candler Professor of American Social History in 1980, and he continued actively writing after his retirement in 1984. He also was a visiting scholar in 1949—50 at Columbia University, in 1977—81 at the U.S. Food and Drug Administration, and in 1986 at the National Library of Medicine. In 1949, he helped design the graduate history program, and in 1952, he became a founding member of the Emory Institute for the Liberal Arts. From 1958—66, he chaired the department of history. Young received numerous honors from Emory, including the Thomas Jefferson Award, the Emory Williams Distinguished Teaching Award, and the Arts and Sciences Award of Distinction. Beloved by undergraduate and graduate students alike, Young taught crowded classes in American social history, the history of medicine, and other topics. He guided 38 doctoral dissertations, an Emory record.

Although his earliest scholarly publication was on Civil War era abolitionist Anna Elizabeth Dickinson, Young’s interest in patent medicine advertising began while he was researching material for his master’s thesis. As he noted in the preface to his first book, he was persuaded that medical quackery was an important theme in American social and intellectual history because vast numbers of people had sought to bolster or restore their health through it. Quackery also afforded insight into an anti-rational approach to a key problem in life. Pursuing his interest even in the face of some who suggested that it was not a topic worthy of historical attention, he published in 1961 The Toadstool Millionaires: A Social History of Patent Medicines in America Before Federal Regulation. This was followed by The Medical Messiahs: A Social History of Health Quackery in Twentieth-Century America. Young firmly believed in the salutary role of government with respect to the regulation of food and drugs. His book, Pure Food: Securing the Federal Food and Drugs Act of 1906, became the standard reference on the early history of the U.S. Food and Drug Administration (FDA).

Young was active in a number of governmental and professional organizations relating to his field. He served on the Consumer Task Force, the White House Conference on Food, Nutrition and Health, and the National Food and Drug Advisory Council. He was awarded the Harvey W. Wiley Medal by the FDA and the FDA Commissioner’s Special Citation for his contributions. He served as president of the Southern Historical Association and was a member of the executive council of the American Association for the History of Medicine (AAHM). In 1962, the American Institute of the History of Pharmacy awarded him its Edward Kremers Award, and, in 1982, the AAHM awarded him its William H. Welch medal.

Colleagues recall the sparkle in Young’s eye when he lectured, his generosity in sharing research materials, and his strong support for female scholars at a time when history was still viewed as primarily a male preserve. As a faculty member, he knew how to build consensus and to make decisions when committees had considered all aspects of a problem. He was a diplomat who could forge peaceful solutions between disputing factions within the university. The consummate scholar-teacher, Young exuded enthusiasm for his subject and shared with students the thrill of scholarly publication. He continued to support his graduate students after their careers had been launched, corresponding frequently with them over many years and enclosing useful clippings for their ongoing research.

Harvey was married for sixty years, from 1940 until her death in 2000, to Myrna Goode Young, a professor of classics at Agnes Scott College, who served also as the "first reader and key critic" of his historical writing. They had two sons, Harvey Galen Young, of Doraville, Georgia, and James Walter Young, of Phoenix, Arizona. He is also survived by a sister, Barbara Young, M.D., of Baltimore, Maryland, and by two grandchildren.