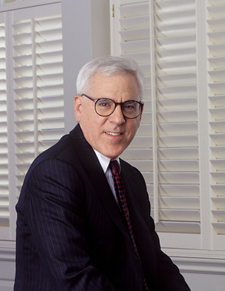 The American Historical Association is pleased to present the 2013 Roosevelt-­Wilson Award for Public Service to David M. Rubenstein for his philanthropic efforts to provide public access to historical resources and for his continued support of historic preservation work. The Roosevelt-­Wilson award honors individuals outside of the historical profession who have made a significant contribution to the study, teaching, and public understanding of history.

Rubenstein, a cofounder and co-­chief executive officer of The Carlyle Group, a global alternative asset management company, has long held a commitment to philanthropy and giving back to the community and institutions that have inspired him over the years. The son of a working-­class family in Baltimore, Rubenstein developed an early appreciation for history during his weekly trips to the library as a boy in the 1950s and ’60s. Now, as a successful businessman, Rubenstein has signed a “giving pledge” to offer at least half of his fortune to charity, ranking him among the Chronicle of Philanthropy’s most generous donors.1 Over a lifetime of philanthropic work, Rubenstein has held to his love for history and his commitment to bringing this appreciation for the discipline to wider audiences.

Four years later, in 2011, Rubenstein continued his dedication to the National Archives through a $13.5 million gift for a new gallery and visitor’s center, which emphasizes the role of the archives in preserving and making accessible central aspects of the nation’s past. The gift was the largest single contribution ever received by the foundation for the National Archives. Foundation chairman and president Ken Lore noted that Rubenstein’s gift “is critical in offering visitors the opportunity to explore the story of America through the records that tell of the ongoing struggles and triumphs in perfecting our democracy.”

In 2012 he donated $7.5 million toward the repair of the 555-­foot-­tall Washington Monument, which was extensively damaged during an earthquake in August 2011. Rubenstein’s gift, which matched funding from the federal government, reflects his commitment to preserving significant US historic landmarks. When asked by the Washington Post about his contribution to repair the monument, Rubenstein noted, “I am committed to philanthropy. . . . I am very involved in [supporting] historic kinds of things. . . . [and] this is something that is quite historic.” Caroline Cunningham, president of the Trust for the National Mall, a nonprofit group that raises funds for improvements on the mall, told the Washington Post that Rubenstein is “one of those people who’s made a commitment to pass on his wealth and invest in this country, and I know that he feels passionately about the history of this country and preserving it.”2

Rubenstein’s gifts are part of what he calls “patriotic philanthropy.” At a George Washington birthday celebration at Mount Vernon in 2013, Rubenstein recalled visiting the historic home as a child and taking his own son to visit. Rubenstein’s appreciation for history informs his philanthropic choices. He told the Washington Post, “[I try] to give back to things that remind people of American history.”

In February 2013 Rubenstein supported the Fred W. Smith National Library for the Study of George Washington, located on the grounds of the former president’s home, with a donation of $10 million, including a $4 million endowment for rare books and manuscripts. The library is a center for scholarly research and leadership training for government, military, nonprofit, and corporate officials, as well as students and educators. It houses Washington’s books and papers and a replica of his personal library. Curt Viebranz, Mount Vernon’s president and chief executive officer, told a reporter, “[Rubenstein] shares our interest in ensuring that these rare Washington and founding-­era documents are there for the people.”3

An interest in the Declaration of Independence led Rubenstein in early 2013 to visit Monticello, the home of the Declaration’s principal author, Thomas Jefferson. Inspired by his visit, Rubenstein donated $10 million to the Thomas Jefferson Foundation to support projects at the historic home that could better tell Jefferson’s story. The contribution, which ranks among the top five gifts in the foundation’s history, will be used not only to restore the home’s second and third floors, but also to restore Jefferson’s original road scheme and to reconstruct at least two log buildings in Mulberry Row, the community where slaves lived on the Virginia plantation. Monticello has been interpreting the enslaved experience at the plantation for decades; Rubenstein’s critical donation to rebuild sites in Mulberry Row will help to further demonstrate that African American history is essential to Monticello’s history. When announcing the gift, Rubenstein noted, “I think it’s important to tell people the good and the bad of American history, not only the things that we might like to hear.”4

The AHA is proud to acknowledge David M. Rubenstein for his sustained and generous support of history and his determined efforts to make sure that citizens have access to the nation’s past.

1. Nicole Lewis, “A Billionaire Looks to Give Away Most of His Fortune—­Once He Figures Out the Details,” Chronicle of Philanthropy, February 6, 2011.