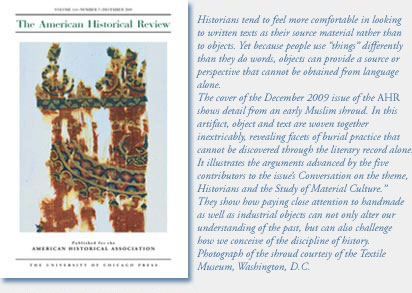 Members of the AHA should shortly be receiving their copies of the December 2009 issue of the American Historical Review, which includes one stand-alone article, an AHR Forum consisting of seven articles, and the AHR Conversation. There are also featured reviews of six books along with the usual extensive book review section.

The lead article is “Social Death and Political Life in the Study of Slavery,” by Vincent Brown. In this piece, which is part review article, part analysis of the topic, Brown takes issue with the reliance on Orlando Patterson’s concept of “social death” as the basic and defining condition of slavery. As a concept, he argues, it offers a neat cultural logic, but ultimately does little to illuminate the social and political experiences of enslavement and the struggles that produced historic transformations. Surveying a range of recent writings, Brown concludes that scholars would do better to keep in view the struggle against alienation—against the prospect of “social death”—rather than the supposed fact of alienation itself.

The AHR Forum, “Transnational Sexualities,” follows in our attempt to take a global and comparative approach to topics that have long been considered largely in national contexts. In “Thinking Sex in the Transnational Turn: An Introduction,” Margot Canaday observes that historians of sexuality, in part because of the relative newness of the field, in part because of the very nature of the subject, have perhaps been more open to comparative and transnational approaches than others. But she also notes what the six other contributors to the forum underscore in their essays: that a transnational approach must confront the difficulties in translating fundamental aspects of the experience and understanding of sexuality from one society or culture to another. In “Sexuality, Africa, History,” Marc Epprecht examines the history of writing about sexuality in sub-Saharan Africa, focusing on the factors that have contributed to the lingering stereotypes about “Africanness” in the historiography. In “Transnational Sex and U.S. History,” Joanne Meyerowitz suggests several subjects—interracial sex and marriage, homosexuality and the state, and sexual coercion—as particularly appropriate themes for a transnational treatment in the history of sexuality. In “Syncopated Sex: Transforming European Sexual Cultures,” Dagmar Herzog analyzes the vast scholarship on the history of sexuality in modern Europe, tracing its evolution from early efforts to denaturalize the present and reconstruct the imaginative universe of the past, through a phase focused on the integration of its history with other aspects of history, to the current state of the field characterized by an interest in comparative approaches. In “Transnational Histories of Sexualities in Asia,” Tamara Loos identifies three approaches in the field: histories of sexuality and imperialism that focus on unions between Western men and Asian or mestizo women; histories that reveal how colonial encounters transformed “local” moral hierarchies; and histories of non-normative sexualities and transgenderism. In “Writing Histories of Sexuality in the Middle East,” Leslie Peirce looks at the histories of sexuality in the medieval, early modern, and modern periods and defines the “Middle East” to include European, Eurasian, and African regions that were part of Muslim-ruled empires of the past and their European colonial successors. Finally, Pete Sigal, in “Latin America and the Challenge of Globalizing the History of Sexuality,” surveys cases from premodern, precolonial, and early colonial Latin America, offering a critique of current approaches to the history of sexuality, which largely fail, in his view, to comprehend both premodern and non-Western experiences.

The topic of this year’s AHR Conversation is “Historians and the Study of Material Culture.” It brings together five scholars in the field, including one archaeologist, in a discussion that took place online over the late summer and early fall. The participants are Leora Auslander, a European historian who has written extensively on material culture; Amy Bentley, a historian of food; Leor Halevi, a historian of Islam; Otto Sibum, a historian of science; and Christopher Witmore, an archaeologist of Greece.

The February 2010 issue will include the presidential address—“An American Album, 1857”—by Laurel Thatcher Ulrich and an AHR Forum, “Representing the Holocaust.”

—Robert Schneider (Indiana Univ.) is the editor of the American Historical Review.