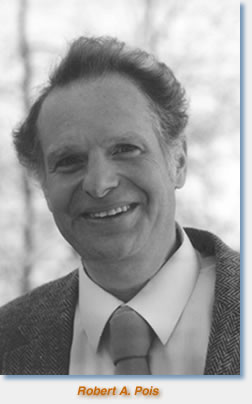 Robert A. Pois, professor in the department of history at the University of Colorado at Boulder, died in Boulder on January 18, 2004. The cause of death was pneumonia. He was 63 years old.

Born in Washington, D.C., in 1940, Pois grew up in Chicago and graduated with a BA degree from Grinnell College in 1961. Having decided to specialize in modern German history, he went on to do graduate work at the University of Wisconsin at Madison, studying with, among others, professors George L. Mosse and Theodore Hamerow. After completing his MA degree in 1962 and his PhD degree in 1965, Pois accepted a position at the University of Colorado where, with the exception of a one-year appointment at UCLA in 1977–78, he taught for the next 38 years. At Colorado, Pois compiled one of the most impressive teaching records in recent memory. He received nearly every teaching award the university confers—over a half-dozen all told—including the university's two most prestigious titles, that of Presidential Teaching Scholar and Distinguished Teaching Professor of History.

Known above all for his droll, witty classroom style, his mastery of the telling anecdote, and his deep concern with the moral dimension of historical events, Pois drew hundreds of students to his classes every year. Whether teaching a course on Western civilization, modern European history, or Nazi Germany, he exhibited both an exceptional command of his material and a keen awareness of the tragic-comic dimension of history. As one of his former students put it in a printed interview, Pois's classes "were symphonies that would take you from a moment of elation and wonder, to tears, to uproarious laughter, all in the same lecture." It is not surprising that Pois became one of the most esteemed members of the faculty, not only because of his eloquence as a teacher, but also because of the unfailing kindness, compassion, and generosity he showed toward others, students and colleagues alike.

In addition to his skills as an educator, Pois produced a solid body of scholarly work. Between 1967 and 2004, he published six books and over 30 articles and essays on a wide variety of topics, including historiography, 20th-century Europe, World War I, Weimar Germany, Expressionism, Nazi Germany, and the Holocaust.

Pois's first book, Friedrich Meinecke and German Politics in the Twentieth Century, dealt with the renowned historian's response to his country's defeat in two world wars, including his significant (but flawed) re-thinking of German history and politics in light of those defeats. His second work, The Bourgeois Democrats of Weimar Germany, investigated the liberal German Democratic Party during the 1920s and early 1930s. According to Pois, the GDP, despite its ostensible support for pluralism and republicanism, contained strong elements of statism, political romanticism, and anti-Semitism, which, however inadvertently, helped prepare the way ideologically for Hitler's accession to power.

In 1982, Pois struck out in new directions by publishing a psychohistorical study of the German Expressionist artist, Emil Nolde. In this work, entitled simply Emil Nolde, Pois drew on his long-standing interest in psychoanalysis in general and Freudian theory in particular to produce a penetrating analysis of Nolde: one that explained not only the themes of many of his paintings, but also his conflicted relationship with National Socialism. Four years later Pois completed his fourth book, National Socialism and the Religion of Nature. Here he mapped out the Nazi view of man's place in nature, arguing that it was chiefly characterized by a "rejection of transcendence" on the one hand, and a strong adherence to certain ineluctable "laws of life" on the other.

The last two books Pois wrote saw a turn toward military history, a field that had been of interest to him since the beginning of his career. The first, entitled The Great War, is a broad political-military history of World War I, and the second, Command Failure in War: Psychology and Leadership (co-authored with Philip Langer and published posthumously this past summer), is a study of the crucial role that psychological and emotional factors have played in the success or failure of military commanders.

As those who knew him were well aware, Pois's interests and expertise extended far beyond the matters discussed in his books and articles. He could also hold forth at length on topics as far removed as the history of the steam locomotive and the "truth" of the Loch Ness monster. The numerous set-piece stories he told in and out of class—some perhaps apocryphal—were famous throughout the university community, and will surely be repeated, no doubt with further embellishments, well into the future.

Bob Pois is survived by his wife, Anne Marie, and three daughters, Rebecca, Erica, and Emily.