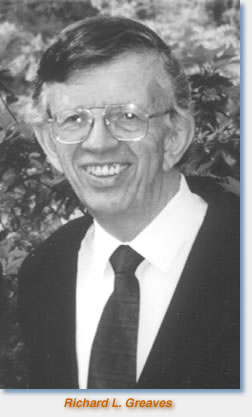 Richard Lee Greaves, the Robert O. Lawton Distinguished Professor of History at Florida State University, passed away in Bethesda, Maryland, on June 17, 2004, at the age of 65, after a long illness.

Richard Greaves was born in Glendale, California, on September 11, 1938. He graduated summa cum laude and class salutatorian from Bethel College in 1960, received an MA magna cum laude from the Berkeley Baptist Divinity School in 1962, and his PhD from the University of London in 1964 under the supervision of Geoffrey F. Nuttall. After appointments at Florida Memorial College, William Woods College, and Eastern Washington State College, he received tenure as associate professor of humanities at Michigan State University in 1972. That same year, he was appointed to the history faculty of Florida State University. He became Courtesy Professor of Religion there as well in 1985, and, in 1989, Robert O. Lawton Distinguished Professor of History. He served as chair of the department of history from 1993 to 2002, and was co-director of the university's Center for British and Irish Studies. Elected a fellow of the Royal Historical Society in 1981 and a member of the American Philosophical Society from 1987, he was active in many professional organizations, particularly the American Society of Church History, whose president he became in 1991. From 1992 to 1995 he was president of the International John Bunyan Society. During the same period, he served on the American Historical Association's Morris D. Forkosch Award Committee, acting as chair 1995–97, and, subsequently, was a member of the Research Division (1999–2002) and the Task Force on Graduate Education (renamed the Committee on Graduate Students) (2000–04). He served as well on editorial boards for the publication of works by William Tyndale and Sir Thomas More, and for Albion, The Baptist Quarterly, and Bunyan Studies.

In the range, erudition, and distinction of his work, Richard Greaves had few peers among British historians of his generation. The 26 books he wrote, co-authored, edited, and co-edited, many of formidable scope as well as learning, would have filled several busy careers. His The Puritan Revolution and Educational Thought (1969) was awarded the Walter D. Love Prize of the Conference on British Studies. Society and Religion in Elizabethan England (1981), the culmination of the first part of his career, was a finalist for the Robert Livingston Schuyler Prize of the American Historical Association for the best book on British history published between 1976 and 1981. The three volumes of the Biographical Dictionary of British Radicals in the Seventeenth Century (1982–84), which he co-edited and which brought together some 160 scholars from around the globe, were a natural outgrowth of his interest in Puritan social experiment and nonconformity; he himself contributed more than 180 of its articles. Saints and Rebels: Seven Nonconformists in Stuart England (1985) was a further extension of this interest, but with his massive trilogy on the persistence of radical unrest and plotting in the Restoration period, Deliver Us from Evil (1986), Enemies under His Feet (1990), and Secrets of the Kingdom (1992), the first volume published by Oxford University Press and the latter two by Stanford, he compelled a serious reexamination of the political underpinnings of late 17th-century England and the genesis of the Glorious Revolution. At the same time he co-authored two major survey texts, Civilizations of the World (1990) and Civilizations of the West (1992).

Long before “British” history became fashionable in Tudor-Stuart studies, Richard Greaves practiced it. His Theology and Revolution in the Scottish Revolution: Studies in the Thought of John Knox (1980) capped a decade of research on the Scots reformer published in Archiv fur Reformationsgeschichte, the Journal of Modern History, and other leading journals, and he explored Irish history in God's Other Children: Protestant Nonconformists and the Emergence of Denominational Churches in Ireland, 1660–1700 (1997), which received the Albert C. Outler Prize in Ecumenical Church History from the American Society of Church History, and a biographical study, Dublin's Merchant-Quaker: Anthony Sharp and the Community of Friends, 1643–1707 (1998), both published by Stanford. An interest in gender history as well produced his Triumph over Silence: Women in Protestant History (1985). His most abiding concern, however, was with the life and thought of John Bunyan. His first book was a study of Bunyan, as was his last. He edited volumes 2, 8, 9, and 11 of The Miscellaneous Works of John Bunyan for Oxford University Press, and, with James Forrest, John Bunyan: A Reference Guide (1982). John Bunyan and English Nonconformity (1992) collected his many articles on Bunyan, and in Glimpses of Glory: John Bunyan and Dissent (2002), also published by Stanford, he produced a definitive and deeply empathetic life of Bunyan that emphasized the great nonconformist's lifelong struggle with “Giant Despair.” As Bernard Capp wrote in the American Historical Review, Glimpses of Glory is “a triumphant culmination and achievement . . . that will stand the test of time” [AHR 109, 3 (June 2004): 971–72]. He left as well at his passing the nearly completed draft of a biography of the Rye House plotter and religious controversialist Robert Ferguson. The New Dictionary of National Biography begins its life with 111 of his articles.

With the years came many marks of recognition. In addition to his book awards and other professional honors, Richard Greaves received three grants from the American Council of Learned Societies, two from the American Philosophical Society, and one from the National Endowment for the Humanities. In 1998 he was a resident fellow of the Rockefeller Foundation's Bellagio Center, and in 2000 a Guggenheim fellow. At the same time he remained a deeply dedicated teacher, who asked much from his students but always gave more. He was voted Phi Alpha Theta Professor of the Year at Florida State in 1980, won the University Teaching Award in 1988, and was a charter member of the President's Council for Excellence in College Teaching. Even in the last weeks of his life, he continued to supervise and critique his students' dissertations.

Richard and I collaborated on five books. I never knew a man of greater scholarly integrity and dedication, or of greater personal generosity. He is survived by his wife of 45 years, Judith R. Greaves, who was the helpmeet and collaborator of all his books; his daughters, Sherry and Stephany; his mother, Frieda Greaves; his brothers, Gary and Robert; and a grandson, Bradford.