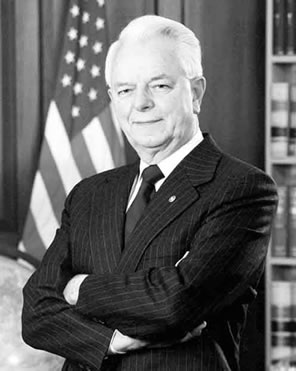 At a special opening session of the AHA's 118th annual meeting to be held in the Marriott Wardman Park's Marriott Ballroom Salon II on January 8, 2004, President James McPherson will present to the Honorable Robert C. Byrd, senator from West Virginia, the inaugural Theodore Roosevelt–Woodrow Wilson Award for Civil Service. Following the presentation, Senator Byrd will make a brief acceptance speech.

The award is named for the two former AHA presidents who were also presidents of the United States, Theodore Roosevelt (AHA president in 1912) and Woodrow Wilson (AHA president in 1924). The honorific award is intended to recognize individuals outside the academy such as civil servants and public officials who have made a significant contribution to history and will be presented at the discretion of the AHA Council.

Senator Byrd was chosen by the Council to be the first recipient of the award because of his lifetime commitment to, and interest in, the discipline of history.

Senator Robert C. Byrd is the classic self-made and self-educated man, who has made his life a continuing quest for knowledge, particularly in the field of history. Born in North Wilkesboro, North Carolina, in 1917, he was raised in the coal-mining regions of West Virginia by his aunt and uncle. Unable to afford a college education after graduating from high school, Byrd worked in different jobs to support himself, including a spell as a welder in the shipyards of Maryland and Florida during World War II. He won election to the state house of delegates in 1946, to the U.S. House of Representatives in 1952, and to the United States Senate in 1958. He attended American University's law school at night even while fulfilling his responsibilities as a U.S. Senator and had the pleasure of receiving his law degree from President Kennedy in 1963. Quite characteristically transcending the usual academic sequence, Byrd then went on to attend several colleges as an undergraduate and ultimately received his BA (cum laude) in political science from Marshall University in 1994.

Senator Byrd was elected Senate Democratic Whip in 1971 and Senate Democratic Leader in 1977. He served as majority leader from 1977 to 1981, and again from 1985 to 1989, during which time he led the effort to ratify the Panama Canal treaties and to extend civil rights legislation. In 1989 he became chair of the Senate Appropriations Committee and President Pro Tempore of the Senate, holding those positions until 1995 and again from 2001 through 2003. During the 1980s, he delivered a hundred speeches on the floor dealing with various aspects of the Senate's history, which were published in four volumes as The Senate, 1789–1989: Addresses on the History of the Senate (Government Printing Office, 1989–94). The first volume won the Henry Adams Prize of the Society for History in the Federal Government as "an outstanding contribution to research in the history of the Federal Government." He also published The Senate of the Roman Republic: Addresses on the History of Roman Constitutionalism (Government Printing Office, 1995).

In 2001, Senator Byrd introduced legislation instituting what are now known as the "Teaching American History" grants, which are designed to be used for improving the teaching of American history—as distinct from social studies—in America's public schools. Starting with a $50 million appropriation, the program, administered through the Department of Education, is currently funded at $100 million. The goal of this program is for school districts and institutions with expertise in American history to collaborate over a three-year period to help teachers develop the knowledge and skills necessary to teach traditional American history in an exciting, engaging, and effective way. The Department of Education awarded 61 grants in 32 states in 2001 and 114 grants in 39 states and the District of Columbia in 2002. The awards for 2003 were announced in September.

The award ceremony will be followed (in the same room) by the plenary session of the annual meeting, "Thought on War in a Democratic Age."

—Miriam Hauss is a member of the AHA's executive office staff.