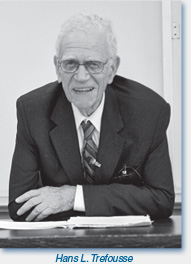 WWII Veteran and 50-Year Member of the AHA

Born in Frankfurt on December 18, 1921, Hans L. Trefousse came to America at age 13, fleeing Nazi Germany with his parents. That experience instilled in him a hatred of racism and totalitarianism, and the contrast between the democratic United States and Nazi Germany made him an intensely patriotic American. In 1942, seven years after his arrival in America, Trefousse graduated Phi Beta Kappa from City College of New York and, with World War II raging, entered the United States Army. Proficiency in his native tongue made him an invaluable interrogator of German prisoners. Following D-Day, on August 25, 1944, Captain Trefousse participated in the liberation of Paris.

Trefousse’s most memorable accomplishment occurred at Leipzig on April 19 and 20, 1945. There, German Colonel Hans von Poncet, with 300 of his best men and 17 American prisoners, was holed up in the massive Battle of the Nations Monument. With Poncet obeying orders from Hitler and refusing to surrender, Trefousse volunteered to talk him into giving up. Going into the monument under a white flag of truce at three in the afternoon, Trefousse argued for eleven hours with Poncet that the war was lost and that sacrificing his men’s lives would be useless. Pulling out all the stops, Trefousse referred to Heinrich Kleist’s play The Prince of Homburg, in which the hero won a battle for the elector by disobeying orders. Trefousse prevailed, and Poncet surrendered. Literally hundreds of German and American lives were saved by Trefousse’s courage and persuasive capacity. For a more detailed account of Trefousse’s success at Leipzig, see John Toland, The Last 100 Days (1965).

After the war, the heroic soldier became a gifted teacher and a prolific historian. The GI Bill of Rights enabled him to study American history at Columbia University, earning an MA in 1947 and a PhD in 1950. His primary interest was diplomatic history, and, in 1951, he published his dissertation, Germany and American Neutrality, 1939–1941. Trefousse also began two lifelong associations: teaching at Brooklyn College, beginning in 1946, and marrying Rashelle Friedlander a year later.

Although Trefousse never lost his interest in diplomatic history, his personal encounter with racism led him to join in the re-evaluation of post-Civil War Reconstruction historiography. It had glorified white supremacy “redeemers” and damned egalitarian radical Republicans. Choosing the most maligned radical Republican, Trefousse published Ben Butler: The South Called Him Beast (1957). Trefousse put the best face on Butler’s efficient but harsh administration of New Orleans after its surrender to the Union Navy in 1862, and gave him high marks for his congressional support of radical Republican Reconstruction measures. Having rehabilitated Ben Butler, Trefousse turned to “Bluff Ben Wade” (Benjamin Franklin Wade: Radical Republican From Ohio [1963]), the despised chair of the Joint Committee on the Conduct of the War. Wade would have become president if the impeached Andrew Johnson had been convicted. Trefousse emphasized Wade’s consistent struggle for the rights of African Americans in Ohio and in reconstructing the South, rather than stressing his vindictive tendency to politicize his powerful Conduct of the War Committee.

Having defended two detested radicals, Trefousse wrote arguably his best book, The Radical Republicans: Lincoln’s Vanguard for Racial Justice (1969), tracing radicalism from its late 1840 beginnings to its decline in Ulysses S. Grant’s administration. For a generation, radicals “had been in the political struggle for human rights” and were the driving force within the Republican Party, liberating slaves and guaranteeing black males the right to vote. Trefousse maintains that the radicals “laid the foundation” for the subsequent achievement of their goals.

Elaborating on his themes in The Radical Republicans, Trefousse’s Thaddeus Stevens: Nineteenth Century Egalitarian (1997) celebrates a tenacious worker for interracial democracy, while his Impeachment of a President: Andrew Johnson, the Blacks, and Reconstruction (1975) and his Andrew Johnson: A Biography (1989) argue that Johnson, rather than being politically inept, cleverly frustrated the aims of radical Republicans, preserving white supremacy in the South for generations.

Trefousse’s Carl Schurz: A Biography (1982) is laudatory even though Schurz abandoned radical Republicans by 1870. Trefousse stressed that, as a gifted practitioner of ethnic politics, Schurz was a role model for future immigrants with political aspirations. He also admired the causes Schurz embraced—antislavery, civil service reform, anti-imperialism, and, as secretary of the interior (1877–81), environmentalism and ultimately a humane policy toward Native Americans. A prodigious worker, Trefousse also edited innumerable books, produced other works including the American Presidents Series volume, Rutherford B. Hayes (2002), and, until a few months before his death on January 8, 2010, was researching a study of Lincoln’s foreign policy.

Trefousse was as comfortable in the classroom as in the library. Students flocked to his classes. He communicated his love of history and his egalitarian idealism to them, and they perceived his genuine interest in them. He kept in touch with students long after they received a BA from Brooklyn College or a PhD from the City University Graduate Center. Trefousse’s Distinguished Professorship was as deserved for his teaching as for his scholarship. Although retired in 1998, he taught courses in Brooklyn College’s Institute for Retirees. He suffered a severe blow in 1999 when his wife, Shellie, died, but he had their son, Roger, their daughter-in-law, Kathleen, and his ongoing research and teaching at Brooklyn College. It was in one of these classes in fall 2009 that he had the stroke that began his rapid decline.