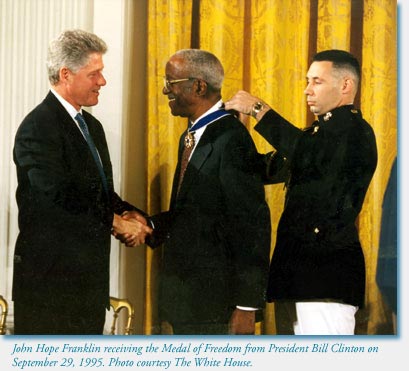 John Hope Franklin, the eminent historian of African American history, civil rights activist, and inspiring teacher for many generations of students, died on March 25, 2009, of congestive heart failure at the Duke University Hospital in Durham, North Carolina. He was 94.

Born in Rentiesville, Oklahoma, on January 2, 1915, Franklin grew up in Tulsa, Oklahoma, and witnessed the tumultuous race riots of 1921 during which his father’s legal offices were burned down. Barred from admission to the University of Oklahoma because of his race, he studied at Fisk University as an undergraduate, and went to Harvard University for graduate studies, where he received his PhD in 1941. He taught at numerous schools including Howard University, Brooklyn College, University of Chicago, and Duke University, from where he retired as the James B. Duke Emeritus Professor of History.

Over the years he published prolifically. In 1947 the first edition of From Slavery to Freedom: A History of African Americans came out and he revised and expanded it on a regular basis. It has sold more than 3 million copies and has been translated into many languages. He continued to write, producing such pioneering studies as The Militant South, 1800–1861 and (with Loren Schweninger) Runaway Slaves: Rebels on the Plantation. In 2005 at the age of 90 he published Mirror to America: The Autobiography of John Hope Franklin.

Franklin served the profession extensively, heading numerous historical associations including the Southern Historical Association, the Organization of American Historians, and, in 1979, the American Historical Association. His AHA presidential address, “Mirror for Americans: A Century of Reconstruction History,” was not only a lucid survey of the historiography of the period, but was also a challenge to future historians to explore the terrains of the nation’s past that had been left unmapped and to do so from new perspectives. In pointing out in that address that “we may be reaching the point, after a century of effort, where we can handle the problems inherent in writing about an internal struggle without losing ourselves in the fire and brimstone of the Civil War and its aftermath,” Franklin was setting out not only a hope, but also his own credo, always reflected in his scholarly work, that it is possible to transcend personal passions to achieve “a closer approximation to the truth” about the past.

Even as he was working hard as a historian, persuasively revising the traditional views about America’s past, he also strove to be a scholar-activist, providing research support to the NAACP that helped in a number of cases. One of the most significant of these was Brown v. Board of Education, which outlawed the practice of school segregation. In 1995 President Clinton awarded Franklin the Presidential Medal of Freedom, and two years later appointed him as chair of “One America in the 21st Century: The President’s Initiative on Race.”

In 2006, he was awarded the John W. Kluge Prize for lifetime achievement in the study of humanity, an apt prize for one who was not only one of the greatest humanities scholars of our time, but who also embodied a humane and civilized sensibility that is all too rare in these fretful times.

“John Hope Franklin made historians as well as millions of Americans look back anew at a difficult past, but always in the service of building a better future,” said Arnita A. Jones, AHA’s executive director, and added: “In 1977, when I began working at the AHA with the National Coordinating Committee for the Promotion of History, we were trying to address the need for expanded career opportunities for a generation of historians facing a difficult job market. It was an effort that began with modest institutional commitments; but John Hope, then president of the Organization of American Historians, was the only one to offer a personal check. He has been my hero ever since.”

—Expanded and adapted from a blog post of March 26, 2009, by Vernon Horn on the AHA’s blog, AHA Today. A more comprehensive In Memoriam essay will be published in a later issue of Perspectives on History.