How Disease Decimated Black Soldiers in the Civil War

About 29,000 black soldiers died of disease (nine times the number that perished in battle) during the Civil War because of camp conditions that were worse for blacks than whites, as well as limited access to medical care as some white doctors refused to treat black soldiers.

Historians are well versed in the practice of historical empathy and the importance of contingency in historical events, but The Appendix challenges you to survive an interactive story based on the Yellow Fever epidemic in 1793 Philadelphia.

“The Checkpoint,” “Sample Wanted List,” and “Massacres” are among the selections from this Arabic novel depicting life in Syria between 2012 and 2013. The selections were translated into English by Michele Henjum. 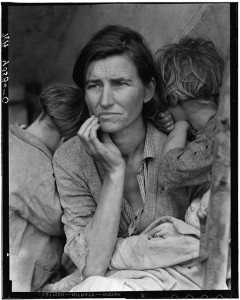 The Making of Dorothea Lange

A new PBS documentary tells the story of the 1930s photographer who captured the iconic Migrant Mother photo.

A brief write-up detailing a variety of new sites and online tools to allow discovery and exploration of the photography of the Great Depression.

The Smithsonian is using crowdsourcing to transcribe its digital collections, and it’s looking for volunteers to participate.

A set of resources on teaching the Ebola crisis and other pandemics, courtesy of Monica Green (Arizona State Univ.), the faculty member who developed them.

The Unstoppable TI-84 Plus: How an Outdated Calculator Still Holds a Monopoly on Classrooms

Comfort and learning curve trump all in an interesting look into a smaller sector of the tech industry.

A fascinating historical look at a corporate culture that might seem absurd in retrospect.

What Were They Thinking?

The striped pajamas with the yellow star were not meant to remind shoppers of Nazi Germany and concentration camps, but that’s what they did.