Today’s What We’re Reading features the unstoppable Teddy Roosevelt, student walkouts in Colorado, animals on trial, and much more! 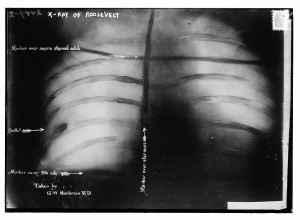 The Speech That Saved Teddy Roosevelt’s Life
Patricia O’Toole details the assassination attempt on Teddy Roosevelt, “…but it takes more than that to kill a Bull Moose.”

Day Out at the Gallows and Other Bygone Photographic Oddities
Forgotten photos show lighter side of Victorian portraits.

Middle East
There Is No al-Sham
Foreign Policy on the ironies of the Islamic State terrorist group’s use of “Iraq” and “al-Sham” in their organization’s name. This article requires logging in with a free username and password.

Al-Sham
Al-Sham is more than a name in a terrorist group’s title. It is a historical place and a home for many people. Composer Mohammed Fairouz discusses his “musical lamentation” and why he named it Al-Sham. His essay includes a brief discussion of the meaning of Al-Sham—the word of many meanings.

Education
In Colorado, a Student Counterprotest to an Anti-Protest Curriculum
Students and teachers react in wake of a controversial school board decision proposal for a curriculum review committee “to promote patriotism, respect for authority and free enterprise and to guard against educational materials that ‘encourage or condone civil disorder.’”

Textbook Case of Bad Textbooking
The journalist Kurt Eichenwald provocatively promotes the role of expertise in the development of textbooks and other educational resources.

Howling Babies Drove Prehistoric Warriors into Battle?
Probably not, but theories like this deserve some attention for their creativity.

Fantastically Wrong: Europe’s Insane History of Putting Animals on Trial and Executing Them
Be sure to take a peek at the book referenced in the article (link within), because as odd as it sounds, prosecution of animals turns out to have quite the history. This history ranges from dolphins to turtledoves and from executions to banishments to Siberia. Now about that class-action suit on mosquitoes…