Today’s What We’re Reading features the growing backlash against @HistoryInPics, the long reach of David Brion Davis, a consumer’s guide to graduate school, creepy medical photos from the past, and much more!

Memories and legacies of the Cultural Revolution.

Crack: The Drug that Consumed the Nation’s Capital

A five part series on the legacy of drugs in D.C., and how the city continues to struggle with the epidemic.

More on the Flu

For those interested in the issues raised by last week’s blog post and last month’s Perspectives article by Tom Ewing, The National Library of Medicine recommends a post by Christine Moffatton Circulating Now, the blog of the NLM. Moffatt continues a conversation started by Ewing in his post on the same blog.

How a 1908 Anti-Suffrage Cartoon Became an Internet Sensation

At the Appendix, Benjamin Breen picks apart a cartoon intended to depict the horrors of a future dominated by women, and why we all agree that his “nightmare” actually seems pretty awesome.

BBC Radio is hosting an essay series on the Golden Age of Islam. In the most recent episode, Dr. Sussan Babaie discusses architecture in Uzbekistan and Iran.

History TAs on Learning to Teach

Not Even Past, a UT Austin history blog, offers an interesting series of reflections by graduate students on being a teaching assistant for the first time.

Marc Parry for the Chronicle reveals the incredible influence historian David Brion Davis has had on the discipline, not just in his scholarship but the multiple generations of prominent historians he has mentored over the years.

At the Atlantic, “When it comes to teaching history, nothing destroys student interest faster and more completely than a heavy reliance on textbooks.”

NCPH’s New Professional and Graduate Student Committee is launching a project to draft a consumers’ guide to graduate school.

Afro-American Studies Has Right To Be Department

Historian Robin D.G. Kelley discusses the politics and criticism academics face when attempting to departmentalize an interdisciplinary department. In this instance, Kelley is proposing to the UCLA academic senate to establish the Department of African-America Studies.

Historian and Chair of the Department for Digital Humanities at King’s College London, Andrew Prescott, discusses the dangers of locking up digitized primary sources.

Inaam Kachachi on ‘Tashari’ and the Iraq She Carries With Her

An interview with novelist Inaam Kachachi whose recently published literary novel depicts the displacement of Iraqis in the 1950s. 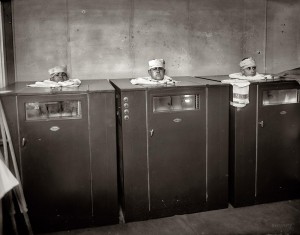 A Creepy Medical Tour From the Past

A collection of photos revealed the practice of medicine in the past, including a bottle of “Female Remedy” that looks suspiciously like a bottle of dark Whiskey.