AHA staff are eager consumers of great historical content, and we enjoy sharing our finds in our series What We’re Reading. Here are a few staff picks for articles published this week.

In the Historical Community 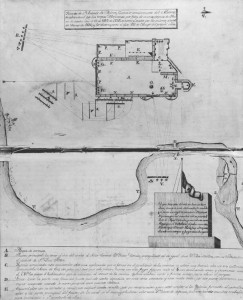 Plan of the Alamo, drawn by José Juan Sánchez-Navarro in 1836. José Sánchez-Navarro Papers, The Center for American History, The University of Texas at Austin; CN 01579a.

A Quiet Culture War in Research Libraries – and What It Means for Librarians, Researchers and Publishers
Every historian who serves on a library-related committee must read Rick Anderson’s provocative depiction of “a growing rift between those who believe the library’s most fundamental purpose is to support and advance the goals of its host institution and those who believe the library’s most important role is as an agent of progress and reform in the larger world of scholarly communication.”

Considering Oral History as Scholarship (Comments Welcome)
The Oral History Association is seeking comment on a draft document on evaluating oral history as scholarship for promotion and tenure.

New Battle Erupts Over Future of the Alamo
The longtime custodians of the Alamo historic site in San Antonio have been forced out. The state believes that the site would be better suited as a commercial site, much like Philadelphia’s Liberty Bell.

Hacking the Humanities
Brown University’s Elias Muhanna’s piece in The New Yorker analyzes how digital history is bridging the gap between the sciences and humanities in her classroom.

A Roomful of Death and Destruction
A New York Review of Books blog by Luc Sante describes the discovery of a trove of NYPD crime scene photos from the early twentieth century, reflecting on the contingencies that allow some historical evidence to survive while other information is lost.

Mau Mau
Radiolab recently released a stunning episode on the Mau Mau rebellion of 1951-1954, the British suppression of it, and its documentation in the imperial archive. Turns out, the British didn’t destroy all its records of detention and torture. But that doesn’t mean historians have had an easy time verifying atrocities in Kenya.

On the Playing Field

French Women Are Taking Over Soccer
In honor of the US Women’s World Cup win, a history of women’s soccer…in France.