Today’s What We’re Reading features an animated population map of the United States, the 11 most endangered historic places, academics’ fears of social media, the politics of patriotic emojis, and much more! 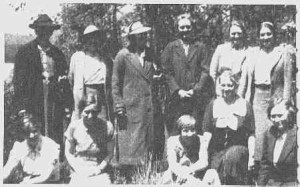 Animated Mean Center of Population for the United States: 1790 to 2010

Baghdad: The Psychological Toll of Being the World’s Most Attacked City

Justin Marozzi writes about the last thousand years of history in Iraq, and how events then mirror events in today’s Iraq.

Burning Bush, a film set in 1969 Czechoslovakia, is about the political repercussions of protests against Soviet occupation.

Frank Lloyd Wright’s Spring House and Shockoe Bottom, Virginia, where over 350,000 slaves were sold between 1830 and 1865, join the National Trust’s list of endangered historic places.

Why Are We Importing Our Own Fish?

The answer includes some compelling and disturbing history.

A biography of a celebrated poet who studied in the UK and Germany, wrote in Persian, and lived in early 20th-century Lahore, which was then a “multicultural city of Sikhs, Hindus and Muslims.”

The American Academy of Arts & Sciences just released an updated version of their Humanities Indicators project, including new information on the state of humanities funding for 2014, as represented in the infographic below. 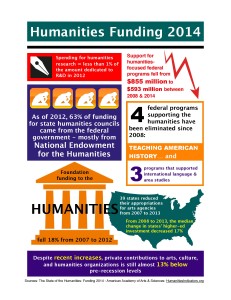 I Was a Digital Best Seller!

Author Tony Horwitz offers a cautionary tale based on his experiences in the brave new world of digital publishing.

Deborah Lupton writes about a survey she conducted about academics’ use of and reservations about social media.

A man’s murder remains unsolved, and reporter Dan Morse argues it is largely because he didn’t use the Internet and left no digital footprint.

Emoji Are Designed to Be More Permanent Than Countries

The Atlantic offers an interesting look at the politics and Unicode behind flag emojis.