Today’s What We’re Reading features the H-Net Commons World Cup discussion board, the culture of disruption, a series on motherhood in the academy,  a tour of the best Monty Python set locations, and much more!

Past Belief: Visions of Early Christianity in Renaissance and Reformation Europe

Anthony Grafton, a professor of history at Princeton University, talks about a big mistake that 17th-century scholars made, and the legend of an early Christian who saved the city of Rome by sewing shut the mouth of a dragon. 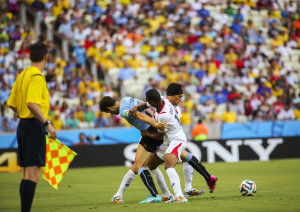 Historians and scholars from other disciplines can discuss the World Cup on H-Net’s Commons Crossroads, “representing the intersection of scholarship and thinking from across our many fields.”

How a Century-Old War Affects You

First in a series of conversations with historians on the First World War at CNN.com.

The Disruption Machine: What the Gospel of Innovation Gets Wrong

Historian Jill Lepore offers a controversial critique of the culture of disruption and its impact on everything from business to higher education. Lepore’s piece should be read in tandem with the article by the AHA’s Jim Grossman in last December’s Perspectives on History.

Pregnancy, Motherhood, and the Academy

The Chronicle of Higher Education is publishing a series of blog posts about pregnancy, motherhood, and graduate school.

The House Readies a New Attack on Scientific Research

The Trouble with Trustees

At Open Culture, revisiting the site of the Fish Slapping Dance, and other such things.

40 Maps That Explain Food in America

A collection of geographical visualizations covering everything from the declining numbers of farms and the rise in obesity to which state makes the best barbeque. For further reading, our own Amanda Moniz, food historian and current assistant director of the National History Center, recommends James McWilliams’s A Revolution in Eating.