Today’s What We’re Reading features a virtual tour of ancient Rome, a regrettable find in a Berlin archive, Mars 2020’s payload, and much more!

The 55 Times Richard Nixon Was on the Cover of TIME
A photo retrospective of Nixon’s cover moments.

In Montmartre: Picasso, Matisse and Modernism in Paris 1900-1910 by Sue Roe, Review: “Not Fresh, but Excellent”

A review of the book In Montmartre: Picasso, Matisse and Modernism in Paris 1900-1910 by Sue Roe in the Telegraph.

Robert W. Rydell, professor of history at Montana State University, answers the questions “Is there a way to give the fairs of years past new life? And if so what would they look like?” for the New York Times. 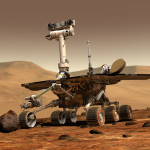 Capping off a very strong week for the Mars rovers, NASA announced the payload for the next Mars rover mission, Mars 2020, just days before Curiosity celebrated two Earth years on Mars. Curiosity also fulfilled its primary mission goal of one Martian year (687 Earth days) in June, while the much older Opportunity rover broke the “off-world” distance record, having driven 40 km (25 mi) since landing in January 2014 (~5.6 Martian years).

14 Digital Tools for Authors and Illustrators

A few digital tools for writers, illustrators, and storytellers to help alleviate writer’s block, generate a GIF, create a visual notebook, and much more.

Adventures in the Berlin Archives

Sometimes you find things in the archives you regret. Rachel Epp Buller writes about her unfortunate find in Nursing Clio.

A Definitive Timeline of Denim by the Decades