Today’s What We’re Reading features memory of Seneca Falls, a Vatican digitization project, the oddity of candy corn, and much, much more!

Vatican Library Digitizes Ancient Manuscripts, Makes Them Available for Free
82,000 documents will be digitized over the next 15 years, for a cost of $63 million.

Black History Is the Black Book of Capitalism
Why everyone needs to learn about black history. 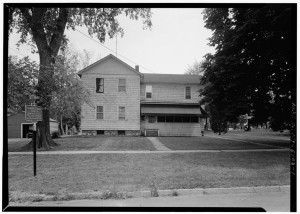 The Myth of Seneca Falls: Memory and the Women’s Suffrage Movement, 1848-1898
Lisa Tetrault’s recently published book. One of those books that compels us to ask new questions about long-held assumptions. And reminds us why both history and memory matter.

A Message to the 21st Century
In 1994 Isaiah Berlin wrote, “My life has been peaceful and secure, and I feel almost ashamed of this in view of what has happened to so many other human beings. I am not a historian, and so I cannot speak with authority on the causes of these horrors. Yet perhaps I can try.” The full essay has been reprinted in the New York Review of Books.

In Cold War, US Spy Agencies Used 1,000 Nazis
We’ve known about the practice for a long time now, but newly released documents reveal that it wasn’t just a few Nazis who got special treatment from the US after WWII. The US intelligence system relied on more than 1,000 Nazis during the Cold War. (Requires subscription to the New York Times)

Century-Old Notebook from Antarctic Expedition Found
After more than 100 years, a summer melt reveals a notebook containing details about the photography of an Antarctic expedition. The notebook’s condition is remarkable having been left outside 100+ years ago.

The Last Set at Miami’s Tobacco Road
An old Miami nightspot, Tobacco Road, says goodbye to its 100+-year-old building. “Where are all the ghosts going to go?”

Galenicals and Galenism in the History of Medicine/The Continued Prevalence of the Conception of Macrocosm and Microcosm in the Seventeenth Century
A recording of a lecture on the history of antibiotics broadcast in 1957 by New York Public Radio.

A Cloying Kernel of Evil: The History of Candy Corn
While not quite as bad as Peeps, this multi-colored abomination of a candy does go way back.

Historians Admit to Inventing Ancient Greeks
The classic Onion piece telling us how young professors invented Homer, Aristotle, and all of ancient Greek culture in the 1970s to advance their careers…