Today’s What We’re Reading features scenic bookstores, a Sioux Chef, a collection of forgeries, and much more!

Why Politicians Need Historians
Harvard historian David Armitage writes in the Guardian on the importance of politicians knowing their history and the need for political engagement by historians.

Earnings of Humanities Majors with a Terminal Bachelor’s Degree
Just after a flurry of activity to a 2011 AHA blog post, the American Academy of Arts & Sciences releases an updated report detailing earnings data from 2012.

When Racism Was a Science: “Haunted Files: The Eugenics Record Office” Recreates a Dark Time in a Laboratory’s Past
Historians and artists at NYU delve into the unsettling history of the Eugenics Records Office with an exhibit that runs through March 2015.

The “Sioux Chef” Is Putting Pre-Colonization Food Back on the Menu
An NPR article providing insight into Sean Sherman’s research as he prepares to open a restaurant featuring pre-colonization foods.

Omar Mukhtar, Lion of the Desert
The story of Omar Mukhtar, “the leader of the resistance against Italian occupation [who] remains Libya’s anti-colonialist hero despite multiple attempts contemptuous rulers have made at hijacking his image.” 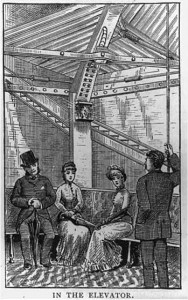 The Elevator as Cultural Phenomenon
Lifted: A Cultural History of the Elevator was published earlier this year by New York University Press.

A Youth Misspent Trying to Escape Communism
Memories of the Berlin Wall 25 years after its fall.

Johns Hopkins Shows Off its Extraordinary Collection of Fake Texts
The collection contains 1,500 rare forgeries, at least one of them made in the 15th century.

Better Ways to Learn
Tips from the new book How We Learn: The Surprising Truth about When, Where, and Why It Happens by a New York Times science reporter.

This Side of Paradise: The First Woman to Photograph One of Islam’s Holiest Places
A woman makes history photographing a historic place.

How Commerce and Conquest Spread the Ancient Cultures of the Middle East across the Mediterranean
On the new exhibit Assyria to Iberia at the Dawn of the Classical Age at New York’s Metropolitan Museum of Art.

Can Changing How You Sound Help You Find Your Voice?
NPR’s All Things Considered looks into how speech patterns and intonation play a role in others’ perception of you.

“Dear White People”: A New Movie about Race on Campus Is, Sadly, Spot-On
The Chronicle of Higher Education features some of the conversations surrounding a new satirical drama focusing on the collegiate experience of black students at Ivy League schools. The film’s upcoming theatrical release begins in select theaters this Friday.