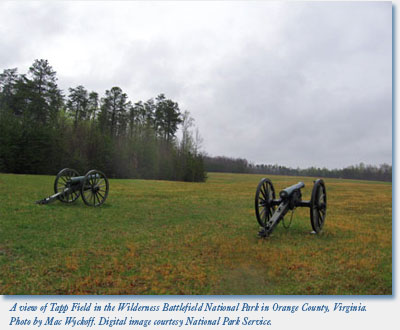 Evoking memories of the Walt Disney Company’s efforts to build a theme park near the Manassas Battlefield in the early 1990s, the Civil War Preservation Trust has alerted its members that Walmart, Stores, Inc., is planning to build a 145,000-square-foot “Walmart Supercenter” in Orange County, Virginia, a quarter-mile from the Wilderness Battlefield National Park.

A Wilderness Battlefield Coalition consisting of the Civil War Preservation Trust (CWPT), the Piedmont Environmental Council, the National Trust for Historic Preservation, the National Parks Conservation Association, the Friends of Wilderness Battlefield, and the Friends of the Fredericksburg Area Battlefields, has been formed to fight the development. The Wilderness Coalition argues that the proposed Walmart Supercenter would lead to more traffic, sprawl and destructive development in the area surrounding the battlefield.

More than 180,000 troops engaged in a two-day battle on the Wilderness Battlefield that left 18,000 Union and 10,000 Confederate troops killed, wounded or captured. The battle also marked the first showdown between Generals Robert E. Lee and Ulysses S. Grant.

Today more than 2,773 acres of the Wilderness Battlefield are preserved as part of Fredericksburg and Spotsylvania National Military Park. The Walmart store is proposed for a 55-acre parcel in Orange County, north of the intersection of Route 3 and Route 20 directly across the road from the battlefield. Although the Walmart store would not be built inside the congressionally authorized boundary of the Wilderness Battlefield, it is within the historic limits of the battlefield.

According to CWPT spokesman Jim Campi, “This Wilderness Walmart proposal is the wrong project, in the wrong place, at the wrong time. With four other Walmart stores located less than 20 miles from the Wilderness Battlefield, it is hard to argue there is even a need for such a facility at this location. But what is not in question is that a Walmart Supercenter is entirely inappropriate next to a hallowed battlefield park.”

For more information on the Wilderness Battlefield Coalition and to learn how you can get involved in the efforts to oppose the Walmart project, visit the web site at www.civilwar.org/walmart08/.

Before leaving for its summer recess, Congress passed and sent to the president a bill (H.R. 4137, H. Rept. 110-803) reauthorizing federal higher education programs. It marks the first time in over a decade that Congress had reauthorized the Higher Education Act. The bill includes a new “American History for Freedom” initiative to establish or strengthen postsecondary academic programs or centers that promote the teaching of “traditional American history, free institutions and the history and achievements of Western Civilization.”

The three-year grants will be awarded on a competitive basis and the legislation authorizes the program beginning in fiscal year 2009 and for five successive fiscal years.
Traditional American history is defined as “the significant constitutional, political, intellectual, economic, and foreign policy trends and issues that have shaped the course of American history; and the key episodes, turning points, and leading figures involved in the constitutional, political, intellectual, diplomatic, and economic history of the United States.”

A free institutions is defined as “an institution that emerged out of Western civilization, such as democracy, constitutional government, individual rights, market economics, religious freedom and religious tolerance, and freedom of thought and inquiry.”

On August 14, 2008, the National Archives and Records Administration (NARA) released more than 35,000 official personnel files of men and women who served in the Office of Strategic Services (OSS), the U.S. intelligence agency during World War II. The files cover civilian and military personnel who served and were later transferred, discharged, reassigned, or died while in service prior to 1947.

These records are available for research in the textual research room at the National Archives II facility in College Park, Maryland.

The 750,000 pages include initial applications to join the OSS; preliminary training and subsequent work assignments; pay, leave, and travel documents; evaluations, basic medical information; and awards, decorations and discharge papers. Occasionally, photographs are included in the application file. Senior officials, officers and men engaged in special combat actions, such as Detachment 101, Jedburghs, X–2, espionage, and major intelligence missions may have citations summarizing those efforts in the files.

Name searches for individuals who served in the OSS can be found online in the Archival Research Catalogue (www.archives.gov/research/arc) listing for the OSS Personnel Files posted as ARC # 1593270.

On July 29, 2008, the House of Representatives passed a series of bills designed to facilitate public access to unclassified records. Other than H.R. 6576, the bills may be included in reauthorization legislation for the Department of Homeland Security later this year.

In the spring, the White House released a new policy in an attempt to standardize procedures for the treatment of what is referred to as “Sensitive but Unclassified” (SBU) information. The memorandum issued by the president adopts, defines, and institutes “Controlled Unclassified Information (CUI)” as the new standard for the treatment of such information. There are currently over 100 different markings for sensitive information that has led to overclassification. The new CUI policy would reduce that to three categories.

H.R. 6193, the “Improving Public Access to Documents Act of 2008,” would create a standard format for unclassified intelligence products created by the Department of Homeland Security (DHS). DHS would be required to consult with the National Archives and Records Administration to create the CUI standard format. All such unclassified intelligence information that has been designated as CUI would have to be prepared in that standard format. The DHS Inspector General would have the authority to randomly select CUI documents to ensure compliance with the new directives. DHS employees would be empowered to challenge the use of CUI markings. DHS would also maintain a publicly available list of documents designated or marked as CUI.

H.R. 4806, the “Reducing Over-Classification Act of 2008,” directs the secretary of homeland security to develop and implement a DHS-wide strategy to prevent the overclassification of information. The bill requires DHS, in consultation with NARA, to create standard classified and unclassified formats for finished intelligence products created by DHS. All finished intelligence products would be simultaneously prepared in the standard unclassified format.

H.R. 3815 would direct the secretary of homeland security to establish an open-source collection, analysis, and dissemination program within the department.

House of Representatives Apologizes for Slavery and “Jim Crow”

On July 29, 2008, the House of Representatives passed a nonbinding resolution (H. Res. 194) formally apologizing to African Americans on behalf of the people of the United States “for the wrongs committed against them and their ancestors who suffered under slavery and Jim Crow” era segregation.

According to the Congressional Quarterly, Congress has rarely issued formal apologies. In 1988, Congress apologized to Japanese Americans who were placed in internment camps during World War II. And last year, the Senate added language to an Indian health bill apologizing to Native Americans for their unfair treatment by the United States.

The Smithsonian’s National Museum of American History will reopen its doors to the public on Friday, November 21, 2008. The reopening will mark the completion of a two-year, $85 million renovation of the building’s core. The centerpiece of the renovation is a specially designed viewing space for the 200-year-old Star-Spangled Banner. The renovation was funded through a public-private partnership with $46 million in federal funds and the remaining $39 million from individuals, foundations, and corporations.

The Library of Congress, the California Digital Library, the University of North Texas Libraries, the Internet Archive and the U.S. Government Printing Office recently announced a collaborative project to preserve public U.S. Government web sites at the end of the current presidential administration ending January 19, 2009. This project is intended to document federal agencies’ online archive during the transition of government and to enhance the existing collections of the five partner institutions.

As part of this collaboration, the Internet Archive will undertake a comprehensive crawl of the “.gov” domain. The Library of Congress has been preserving congressional web sites on a monthly basis since December 2003 and will focus on development of this archive for the project. The University of North Texas and the California Digital Library will focus on in-depth crawls of specific government agencies.

The project will also call upon government information specialists—including librarians, political and social science researchers, and academics—to assist in the selection and prioritization of web sites to be included in the collection, as well as identifying the frequency and depth of the act of collecting. The Government Printing Office will lend expertise to the curating process along with libraries in its Federal Depository Library Program. A tool has been designed by the project team and developed by the University of North Texas to facilitate the collaborative work of these specialists.

On March 27, 2008, the National Archives and Records Administration (NARA) had issued a memorandum stating that it would not conduct a “harvest” of federal agency web sites as they exist at the end of President Bush’s term as they did in 2001 and 2005. In response to concerns expressed by stakeholders, the National Archives issued a clarification on April 15, stating “each agency is now responsible, in coordination with NARA, for determining how to manage its web records, including whether to preserve a periodic snapshot of its entire web page.”

—Lee White is the executive director of the National Coalition for History. He can be reached at lwhite@ historycoalition.org.