If you’re still wondering how to spend your New Year’s holiday, consider joining the AHA for its annual meeting in New York City. The AHA has negotiated deeply discounted room rates of $149/single and $169/double at the Sheraton New York Times Square (the Hilton has sold out). This rate is available to all annual meeting registrants for three days before and after the conference, so combine professional stimulation with a New York vacation.

Multiple attractions beckon nearby, and the subway will take you nearly everywhere. The Museum of Modern Art, for instance, is only a block to the east; and the New-York Historical Society a few subway stops north. On New Year’s Eve, consider watching the ball drop in Times Square, which is in easy walking distance of the meeting hotels. An annual four-mile midnight run through Central Park and bike ride from Washington Square to Central Park provide options for the athletic. Or consider the annual New Year’s Eve Concert for Peace at the Cathedral Church of St. John the Divine in Morningside Heights, cruises to watch the fireworks from New York Harbor, and daytime programming at the city’s children’s museums (note: the New-York Historical Society has a fabulous children’s exhibition on the lower level). Check out the online round-ups of 2014 events at New York magazine and Time Out New York to get an idea of the possibilities. 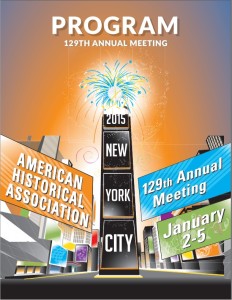 The annual meeting has its own exciting array of attractions, as an opportunity for immersion in historical thinking, networking, and professional renewal. The program is now online, with something for everybody, and many things for most people. In recent years we’ve heard lamentations about the difficulty of choosing between competing sessions. That means the Program Committee is doing its job well by providing so many stimulating options. We’ve increased the number of sessions oriented toward professional and teaching issues, because those tend to draw the largest audiences. Digital scholarship has become more prominent, and we’ve arranged for free WiFi access in meeting rooms at both hotels. We’ve nudged research sessions toward greater geographical breadth, even when comparisons are largely implicit—and a good commentator will make the broader frame explicit. We’ve also made it easier to network, with an opening reception and other events, and a forthcoming app that will facilitate navigation around the meeting. And we’ve scheduled 29 tours to aid the intrepid historian in exploring the city.

We want everyone to have fun, to learn, to meet new people, and to have relaxing time with old friends. We understand that those looking for a job will be on edge, and every year we make changes in the Job Center to reduce the anxiety level. We advise graduate students to come to the meeting beforethey go on the academic job market so that they can explore and experiment. Join fellow graduate students and early career professionals at a reception on Friday at 5 p.m. in the Sheraton’s Central Park West. If you’re a faculty member, consider spending the $36 to register up to three of your students.

Our goal is to combine the array of choices available at a large conference with the networking and small communities that are so attractive at smaller events. Our new app (to be released in early December) will offer a variety of new options that will make it easier to navigate the meeting and its various nooks, crannies, and communities.

Please feel free to contact us at if you have any questions. We look forward to seeing you in New York.