Today’s What We’re Reading features the 50th anniversary of the JFK assassination, the latest news on the Ike Memorial saga, the six best conference questions, cosplayers out of context, and much more! 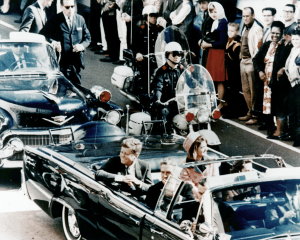 The 50th Anniversary of JFK’s Assassination

In Dallas, Events Mark the 50th Anniversary of JFK’s Assassination

Historian David McCullough will read excerpts from some of Kennedy’s speeches, while the Naval Academy Men’s Glee Club will perform.

Both magazines offer differing, but captivating, accounts on about the chaotic moments on Air Force One after the Kennedy assassination.

First Person: JFK and the Unknowable

The Washingtonian also provides a glimpse at the challenges and opportunities the assassination posed to the information age.

A crowd-sourced archive of letters written during wartime, largely to and from soldiers, will find a permanent home at Chapman University in California.

The latest news in the ongoing saga of the Ike memorial. Get the background from Jennifer Reut’s article in this month’s Perspectives on History.

How Grad Students Can Get Past ‘The Nasty Stuff People Do”

The Conferencegoer covers an interesting discussion that took place at the Compact for Faculty Diversity’s annual Institute on Teaching and Mentoring conference.