Advocacy and the Discipline
Cutting Research at UC Would Slow Advances
Louis Warren explains to Governor Brown the social value of faculty research for the people of California.

‘Organizing Enlightenment’
The AHA’s Career Diversity for Historians initiative rests on the premise that the PhD in any given discipline is much more than a professorial credential. Chad Wellmon (University of Virginia) reminds us that “Disciplines don’t just organize ideas and concepts; they form particular types of people. They entail institutional and social practices and an underlying ethos aimed at producing a certain type of person.”

A Grisly Find under a Supermarket Illuminates France’s Medieval History
In January, the medieval cemetery of the Hôpital de la Trinité was discovered. The skeletons there are of men, women and children of all ages who might have died of a famine or the plague. 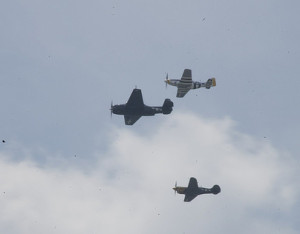 Warplanes over Washington
This article from Air & Space Smithsonian provides some fascinating background on the logistics of organizing the Arsenal of Democracy flyover.

Harriet Tubman Recruited to Appear on $20 Bill after Vote
In anticipation of the upcoming centennial anniversary of the Nineteenth Amendment, in 2020, the grassroots Women on 20s campaign have petitioned President Obama to put Tubman on the U.S. $20 bill.

Fun and Offbeat
A Medievalist on Savage Love
A professor explains to Dan Savage why “medieval” should not be used as a pejorative term in his sex advice column.

Anything to Get the Shot: Aerial Acrobatics
Kristi Finefield of the Prints and Photographs Division at the Library of Congress gives a harrowing blog tour of photographed aerial stunts.