What's in a Title? A Closer Look at History Dissertations 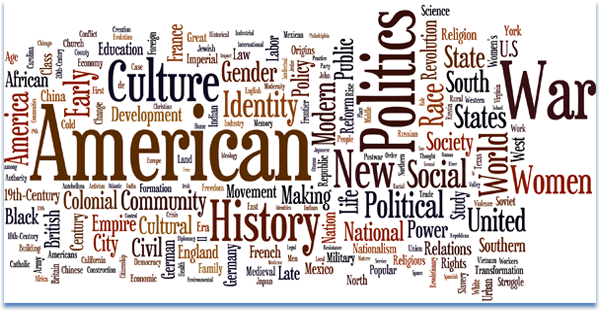 Inspired by a member query, I created a "word cloud" of the history dissertation titles and subtitles from the past two decades that proves quite revealing—particularly when compared to those of an earlier period.1 Admittedly, the title is a poor substitute for the full dissertation as an object of analysis, but it is the most visible part—and some would say, the most read—so it can provide a useful indicator for the choices and priorities of students and their advisors at a given point in time.

The most common word across all dissertations (and hence the largest word shown) was "American." It appeared in 2,032 of the 16,181 titles reported from 1993 to 2012 (Fig. 1). This largely reflects a trend evident from other surveys, which show a sizeable plurality of PhD recipients working in U.S. history.2 Of that total, 8.1 percent of the uses (164 in all) came in a hyphenated context (as part of "Italian-American," "Anglo-American," and the like). In comparison, the word appeared as part of "Latin American" in just 13 dissertations. ("Latin America" seems to be the preferred usage, though it only appeared in 31 titles.)

What is perhaps most striking—given outside perceptions of a growing dominance of studies in race, class, and gender in history programs over the past 20 years—is the exceptionally large representation of "war" and "politics" evident among the titles. "War," for instance, appeared in 11 percent of the recent history dissertation titles. The Civil War received the largest number of references (appearing in 205 titles), followed closely by the Cold War (appearing in 195). In comparison, the declared wars on social or political problems (such as the wars on poverty, drugs, and terror) were quite rare—appearing in only 10 titles.

The use of "politics" also seems quite popular, appearing in 7.6 percent of the titles (1,224 in total), but almost half of them appeared in the context of the "politics of" this or that subject (ranging from the politics of agriculture to the politics of youth).

The distinctive characteristics of the titles used by recent PhDs become more evident when compared to those of an earlier period. As a point of comparison, consider a similar word cloud for 6,988 PhDs conferred from 1920 and 1960 (Fig. 2).3

Once again, "American" is dominant, but a number of new words rise to the fore. Notably, the dissertations from this earlier period were much more prone to be self-referential. Just over 12 percent used some variation of a "study of" or "history of" in their title. Some even managed to combine both in a single title, as in "A Study in the History of Social Politics."

And when compared to the later period, the presence of "war" and "politics" is relatively small. The diminished representation of "war" (it appeared in only 7.4 percent of the titles) partially reflects the proliferation of wars in the 20th century—including the Cold War and the two World Wars—but also reflects a shift toward more recent topics for historical study.

Dissertations from the earlier period were also more likely to be biographical in character, as signaled by the number of references to a "biography" or a specific "career" (appearing in 3.3 percent of the titles from 1920 to 1960, as compared to 0.8 percent of the recent dissertations).

And doctoral students are writing longer titles. Over the past two decades, history dissertation titles contained an average of 12.6 words. In comparison, the titles listed from 1920 to 1960 were comprised of an average of 9.4 words—even with the large volume of filler words noted above.

The two snapshots, and the visible difference between the two of them, can only offer a few superficial clues to some of the deeper changes within, but they are suggestive nonetheless of the scale and the limits of the changes that have occurred.

Robert Townsend is the AHA's deputy director, and the author of History's Babel: Scholarship, Professionalization, and the Historical Enterprise, 1880–1940 (Univ. of Chicago Press).

1. Since 1990, the AHA has systematically collected dissertation titles with the annual updates to the Directory of History Departments and Organizations.

3. Dissertations from the period 1874 to 1960 were scanned in from Warren F. Kuehl's Dissertations in History (3 vols.), and supplemented with information gathered from the AHA's online Directory of History Dissertations.