AHA Today , From the Professional Division

Interviewing in the Job Market in the 21st Century: Reflections after the Workshop

At 8:30 on Saturday morning, the Mercury Ballroom room was buzzing, and there wasn’t even any coffee.  The energy was generated by Interviewing in the Job Market in the 21st Century, a workshop organized by the AHA’s Professional Division, and co-sponsored by the Graduate and Early Career Committee and the Coordinating Council for Women in History. 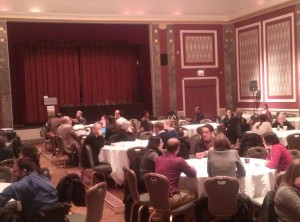 talk with representatives from a wide variety of institutions.  The program blurb described the workshop as one of the most successful sessions of the annual meeting since its inception in the mid-1990s, and from the look of it, it appeared to be true.  Round tables throughout the room identified individuals from careers in non-profit organizations, publishing, university administration, K-12 teaching, and museums, as well as the wide variety of colleges and universities where historians teach: community colleges, four-year liberal colleges, and four-year research institutions, to name a few.

As job seekers streamed in, Philippa Levine, AHA VP of the Professional Division, welcomed attendees and described the process as a great unstructured game of musical chairs.  There were about 65 attendees, about a third of whom were offering advice; and the job seekers circulated throughout the room taking advantage of the rare concentration of historians working in so many fields. The primary audience was, of course, graduate students looking to see what the next steps might be after finishing their degrees; but I also spoke to a graduate program advisor, who advises students on careers while in graduate school, an MA candidate considering the pros and cons of continuing towards the PhD, and a newly-minted PhD navigating early career transitions.

Conversations I overheard included snippets of career paths (“how did you become interested in museum work?”), advice for crafting application letters (“I need a better way to describe my historical actors”), and standard networking connections (“let me give you my card”).  As I left the room, in search of that coffee and to catch the end of a few other sessions, I was glad of the opportunity to talk to so many historians about what they do and to reflect on the wide variety of historians and history careers.