Today’s What We’re Reading features political agendas surrounding history education, thoughts on a potential digital dark age, flamethrowers and other ideas for snow removal, and much, much more!

Current Events and Issues
D.C. Bible Museum Will Be Immersive Experience, Organizers Say
Construction has begun on the Museum of the Bible in Washington, DC, scheduled to open in 2017.

Mein Kampf: A Historical Tool, or Hitler’s Voice from beyond the Grave?
The Washington Post ran a piece about the controversy over the publication of an annotated German edition of Mein Kampf by the Institute for Contemporary History. The institute sees it as an important historical document that should be available for critical study. Critics fear publishing Hitler’s work, which hasn’t been printed in German since the end of the war, will feed anti-Semitism.

Google’s Vint Cerf Warns of “Digital Dark Age”
How will today’s records survive in the future?

Who Should Decide How Students Learn about America’s Past?
Jacoba Urist examines how the political agendas of today’s lawmakers are changing the landscape of what is taught in high school history classrooms.

Syrian “Monuments Men” Race to Protect Antiquities as Looting Bankrolls Terror
Art historians and archaeologists are advising the State Department on the looting of antiquities in Syria.

Topical History
The Blues of Arabia
On the history of a musical genre from the Arabian peninsula.

Gaudí’s La Sagrada Família: Genius or Folly?
Famous basilicas and cathedrals took decades to be built, and a few, like York Minster Cathedral, took centuries. Gaudi’s Sagrada Família was started in 1926 and is expected to be finished in 2026. The BBC looks at responses to the half-built Catholic church in Barcelona, which is already open to the public. 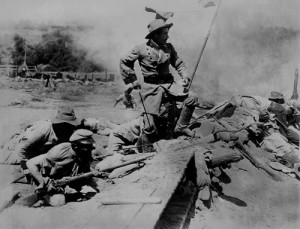 Battle scene from The Birth of a Nation

History at the Movies
Why Sniper Trumps Selma as History and Drama
What makes a feature film good for thinking about history?

After 100 Years, We Still Don’t Know How to Actually Watch a Movie
Ann Hornaday, Washington Post film critic, examines the tension between history and cinema, tracing the argument back to Birth of the Nation, which combined an overtly racist interpretation of history with innovative filmmaking.

Fun and Offbeat
Of SNOWTRON and Snowzilla: How Boston Removed Snow throughout its History
“While James Curley suggested using flamethrowers in 1948, that method does not appear to have been used, probably for the best.”