Today’s What We’re Reading features a letter from Fidel Castro, primary sources in the 21st century, beards, and much, much more!

Cuba and Castro
Fidel Castro’s Childhood Plea to President Roosevelt
The National Archives has a letter from an adolescent Fidel Castro congratulating FDR on his 1940 re-election. Castro also asks for a $10 bill, as he had not yet seen one. For further reading on Cuba-US relations, please see Seth Denbo’s blog post earlier today related sessions at the annual meeting.

What the Texas Textbook Dispute Reveals about the Importance of the Humanities
If humanities education is a waste of resources, then why all the fuss about history books? 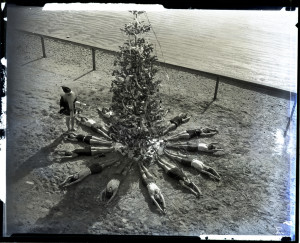 ‘Tis the Season
The Evolving Face of Santa, as Seen in the Smithsonian’s Vast Collections
Portrayals of Santa Claus from 1837 to 1974 show Santa to be a “man of his times.”

Engaging with History
Primary Sources with Some Help from Historypin
The NARA education blog discusses using HistoryPin “to help students learn about change over time and cause and effect.”

Science in History
How 1,000 Years of Arabic Scholarship Advanced Scientific Debate – in Pictures
The Guardian presents photographs of manuscript pages from the collections of the Qatar Digital Library, a newly launched project from a partnership between the British Library and the Qatar Foundation.

1963 Bases on the Moon
Found footage of the BBC’s old Sky at Night program includes a rare interview with Arthur C. Clarke on the idea of permanent residents on the Moon and Mars. While NASA’s Apollo program would exceed Clarke’s expectations, his prediction for a Mars base is now lost in space.

Fun and Offbeat
The Comedy of Beards
Citing Thomas E. Dewey’s moustache as reason for his failed presidential bid, this light-hearted piece on beards has a surprising amount of context regarding facial hair.

Harper’s Index
From Harper’s December issue, this digest of facts details current events in a different, albeit thought-provoking, way.