Metric Matters: Presenting the April Issue of Perspectives on History

The April issue of Perspectives on History arrives near the end of the academic year, when many historians are neck-deep in metrics—grades, course evaluations, funding allocations, and more. So it’s appropriate that several stories in this month’s Perspectives address modes of measurement and their implications. 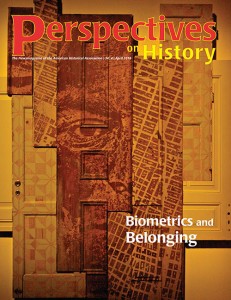 April issue of Perspectives on History

When Cornell University postdoctoral fellow Jose Ragas’s article came to Perspectives over the transom, its thesis impressed us as counterintuitive but sophisticated: outsiders of various nationalities in the past and present have wielded ID cards “to assert citizenship and advocate for inclusion, resisting IDs’ original function as instruments of surveillance.” The final article, “Beyond Big Brother: Turning ID Cards into Weapons of Citizenship,” became our April issue cover story. Ragas doesn’t mince words about the sinister history of biometrics, nor does he cheerlead for the potential of ID cards in the digital age; he notes instead that the vast proliferation of identity documents since the 19th century has given minorities tools to resist exclusion. We think you’ll find the story as stimulating as we do.

Thinking about measurements can bring to mind the ways digital historians can help undergraduates evaluate data. In “Lab Partners: Experimenting with Active Learning,” Harvard’s Gabriel Pizzorno and the University of British Columbia’s Heidi Tworek report on History Lab, a recently implemented course at Harvard. Like any research-intensive course, History Lab prompts students to solve problems by thinking historically. But it does so by allowing them to experiment with methodologies enabled by digital tools. While the course is small and students have access to more resources (like expensive software licenses) than those at many other schools would have, Pizzorno and Tworek include thoughts about how to scale the lab setting (to large lectures, for example), and how to use more readily available sources for student research.

“Beyond ‘Roads Scholars’: Perspectives from the AHA Committee on Non-Tenure-Track Faculty,” by Lynn Y. Weiner (Roosevelt Univ.) and Philip Suchma (St. John’s Univ.; Lehman Coll., CUNY; and Fordham Univ.), presents some of the findings of the committee’s survey of faculty off the tenure track, department chairs, and students. Revealingly, the survey showed that the face of non-tenure-track faculty isn’t all “roads scholars”—those who commute long distances to teach multiple courses at different institutions—though the stereotype persists. Instead, as universities cut back on tenure-stream lines, the types of positions off the tenure track are proliferating and diversifying. This means that further research needs to broaden the way we think and talk about faculty off the tenure track. But despite these changes, faculty still report being treated like second-class citizens in their departments. The committee’s recommendations, accepted by AHA Council in January, are revealing. Be sure to take a look.

The April Perspectives also includes a report from associate editor Kritika Agarwal on Gallaudet University’s new initiative, the Center for Deaf Documentary Studies, recently awarded a grant from the National Endowment for the Humanities. Under the direction of historian Brian H. Greenwald, the center aims to draw on Gallaudet’s interdisciplinary collection of materials associated with deaf history and culture to preserve deaf heritage for future generations.

There’s much more in the April issue—from the National History Center’s efforts to influence public policy on the Hill to web and social media editor Stephanie Kingsley’s insights on Twitter’s role at the annual meeting. By any measure, it’s one of our most interesting. Let us know what you think at perspectives@historians.org.