This week’s What We’re Reading features Earth Day, plenty of visualizations, and a comic about the 1260 Mongol conquest of Damascus.

Conferences
Why I Love Academic Conferences
Devoney Looser spells out how to maximize the experience of any scholarly meeting.

Visualizations
Emblemetric
Emblemetric,a blog sporting the tagline “Data-Driven Design Insight,” dives into the world of branding, logos, and emblems. Often citing historical trends, the blog has covered everything from striped logos to industry trends to individual logo evaluations. The number of graphs to be found here does not disappoint.

On Time-Lapse Rocket Ride to Trade Center’s Top, Glimpse of Doomed Tower
The 1 World Trade Center’s observatory elevators feature a video glimpse into 515 years of history at the tip of Manhattan Island, showing the evolution of the cityscape.

Lascaux – Visite de la Grotte
Explore the Lascaux cave and its art through a 3D website. 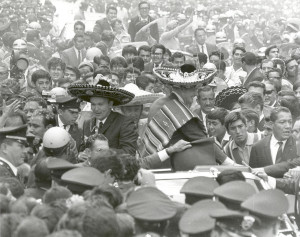 Space Diplomacy
The Role of Space Exploration in Cold War Diplomacy
Teasel Muir-Harmony shows that, human achievement aside, the Moon landing provided a sterling opportunity to advance the diplomatic objectives of the era.

Earth Day!
Earth Day: Planet Earth, as Seen by Apollo 8
The National Archives blog showcases images shot from Apollo 8, which was the first crewed craft to orbit the Moon, though it did not land. Among the images produced was the now famous Earthrise photo.

Fun and Offbeat
Minor Victory in My War against Yam Labeling Fraud
Colin Purrington’s struggle against mislabeled produce (it is a big deal to some of us too) has finally borne fruit. (Awful pun entirely intended.) The original piece describing how sweet potatoes and yams are NOT the same can be found here.