A Social Historian Retools and Reframes

In 1999, I began working on a project focusing on African American women’s involvement in underground economies. After I presented the resulting paper, “Juke Joints, Shot Houses and Candy Stores: Alternative Income Earning Activities among African American Women in North Carolina,” at the Southern Historical Association Conference held in Louisville, Kentucky, in 2000, the co-chairs of the session, Brian Ward and Jerma Jackson, suggested that I apply for a grant from Duke University’s John Hope Franklin Center, which I did. I received the grant, and numerous e-mail messages from interested journal and book publishers.

This work was personal. As a child, I knew family members and family friends who operated juke joints on weekends to earn extra money. I wanted to tell the story of these juke joint operators and moonshine makers, but realized that I did not possess the necessary skill set to complete the research to my satisfaction. The narrative I wrote was qualitatively rich but lacking in quantitative data. After I had continued with this project well past the intended time of completion, frustration led me to put the work on hold, despite the time and effort I had devoted to it over the course of several years. While working on this project, I was simultaneously working on a second project, which I had begun a few years earlier, on the African American funeral home business, which was the subject of my 1990 master’s thesis at North Carolina Central University. 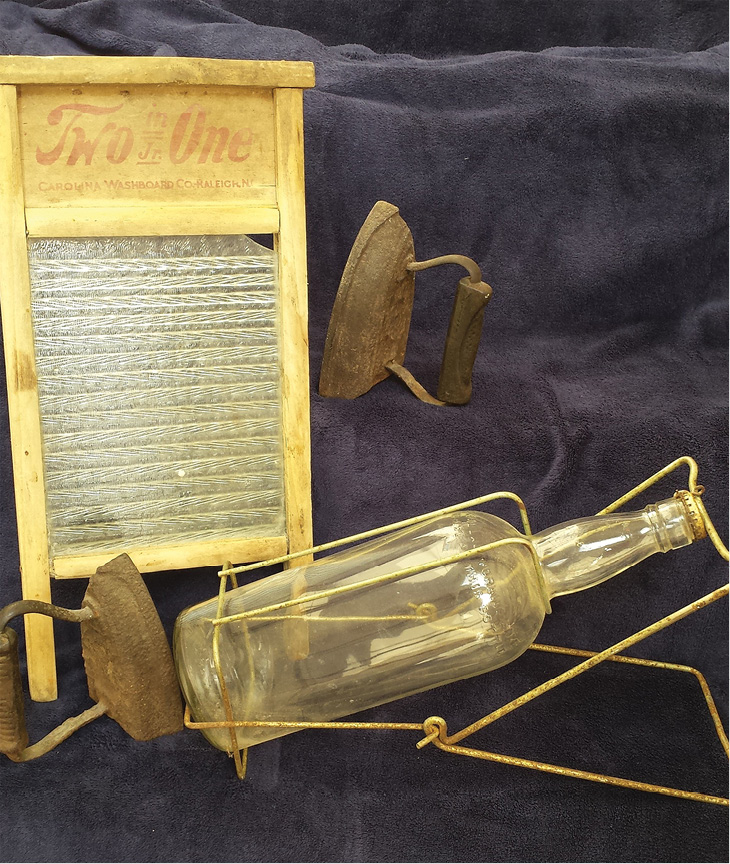 Tools of the trade: washboard, irons, and liquor-by-the-drink bottle and dispenser. Items owned and photographed by author.

A quote from Booker T. Washington that I’d included in my MA thesis suggested that African Americans entered the funeral business in part because it was lucrative. I wanted to know how lucrative, and how this varied by state and region across time. For my research on underground economies, I wanted to know what propelled women and men to get involved in illegal activities, risking jail time and potentially sacrificing their families. Specifically, what were the economic conditions that prompted one to enter into this underground economy? These were the broad questions I was asking, but I quickly discovered that I had no idea how to conduct the type of research that would yield the answers. I knew it involved collecting, compiling, and analyzing data from big data sets. Lacking a background in statistics, I was not sure how to move forward with the research projects. In both instances, I asked, How does one write about economic circumstances without actually providing quantifiable data?

That is when I came across the call for proposals for the History of Capitalism Summer Camp at Cornell University. After reading the description of this boot camp, as those involved called it, I knew it was exactly what I needed in order to complete both research projects.

In the summer of 2013, I had the good fortune to be selected as a participant in the inaugural History of Capitalism Summer Camp led by Louis Hyman at Cornell University. This camp altered both my research and my teaching in ways that I could not have imagined. As historians, many of us spend our summers traveling for research projects, planning our courses for the upcoming academic year and participating in conferences and workshops that we hope will provide something useful. The History of Capitalism Summer Camp was truly transformative for me. I became a bit apprehensive after receiving the advance instructions, which included the suggestion that I become reacquainted with certain mathematical equations and pursue an introduction to others by way of Khan Academy. The expectation was that campers would arrive prepared to engage in the subjects in which we were to receive instruction. The pre-camp work was challenging, but extremely useful.

The 12 days of the boot camp were intense, though made bearable by a wonderfully smart group of co-campers and the superb instruction of Louis Hyman and a cadre of faculty members, primarily from Cornell, who generously gave of their time and knowledge. We covered a number of topics, ranging from corporate finance and banking to micro and macroeconomics. One of the most useful sessions for the purpose of my research was “Econometrics and Statistics for Historians,” taught by Melissa Smith. Using data provided by the instructor or taken from Louis’s research, we were instructed in the use of statistical software, primarily JMP. Interactive lectures and laboratory exercises guided us through the process of conducting statistical research. Perhaps the most important piece of instruction was learning the language of statistics—for example, the difference between continuous, ordinal, and nominal variables, what it means to calculate the P value, and what constitutes statistical significance.

While I certainly recognize the limits of my knowledge and understanding of statistics, I gained the confidence to use it as a research tool, to seek the help of experts, and incorporate it into my work. I have been able to move from broad-based questions to specific questions. I became more comfortable with mathematical equations, and one in particular helped with my research:

Expected Number of Customers per Funeral Home in State i

hi = Number of African American funeral homes for state i

While my research is a work in progress, using statistics allows me to operationalize my question about the income generated by African American funeral home owners at any given historical moment for which data is available. This information, along with my qualitative research, helps explain the economic reasons African American entrepreneurs chose the funeral business.

Research on underground economies presents challenges, some that may not be easily overcome even with statistics. What it does offer, however, is the ability to compare the cost of living in a particular place with the potential wages earned in legal occupations to suggest at what point an income shortfall might induce a woman to engage in illegal activities to supplement her income. Obviously, there are many factors that influence such economic decisions, but the use of statistics offers interesting insights.

My effort to retool is proving fruitful. With the help of the outstanding staff at Virginia Tech’s Laboratory for Interdisciplinary Statistical Analysis and the generous help of colleagues, I am slowly incorporating new research methods into my research repertoire.1 We are all keenly aware that our profession is changing. Technology is dramatically altering how we conduct research, and how we teach. New tools and technologies are allowing us to reach wider audiences and share our passion for history. I am excited about the amazing and innovative work that our colleagues are doing. It all serves as a reminder that history remains an important area of academic inquiry.

Beverly Bunch-Lyons is an associate professor of history at Virginia Tech. She specializes in the history of African Americans, women and gender, and is a burgeoning business historian.

1. I am deeply indebted to Justin Loda from the Laboratory for Interdisciplinary Statistical Analysis at Virginia Tech, who worked with me on the funeral home data. I am also grateful to my Virginia Tech colleagues Walt Mallory (School of Education) and Marlow Lemons (Department of Statistics), who offered useful feedback on the data. Thank you to the history department at Virginia Tech for funding my participation in the History of Capitalism Summer Camp. I have never had the pleasure of meeting Professor Juliet E. K. Walker, but I am inspired by her work on African Americans in business. I owe a great deal of gratitude to my husband, Glenn, whose remarkable knowledge of business and finance has spurred me to think more deeply about the role that economic diversity plays in the subjects of my research.