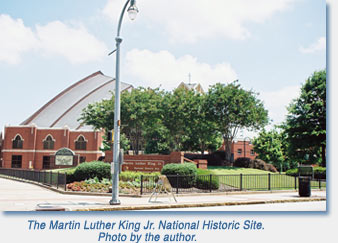 The King Birth Home is located on Auburn Avenue about one block east of Ebenezer Baptist Church in the National Historic Site. The birth home was constructed in 1895, and was purchased in 1909 by King's maternal grandfather, Reverend Adam Daniel (A.D.) Williams. A.D. Williams was pastor of the nearby Ebenezer Baptist Church. When King's father married Alberta Williams, the family moved into the house in 1926. It is the place where Martin Luther King Jr. was born in 1929. The King family lived in the house until 1941. 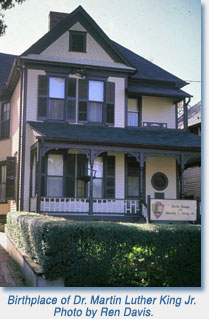 Ebenezer Baptist Church is a Gothic revival-style building located within the National Historic Site. In 1922, the congregation moved into this church on Auburn Avenue. Martin Luther King Sr. became pastor of Ebenezer Baptist Church in 1931, succeeding his father-in-law, A.D. Williams. Martin Jr., his eldest son, grew up attending services at Ebenezer, and succeeded his father and maternal grandfather as pastor.

When the Southern Christian Leadership Conference was founded in the late 1950s, the national headquarters was located in the Prince Hall Masonic Temple on Auburn Avenue. This Romanesque revival-style commercial building was constructed in 1941, and is one of the buildings that influenced John Wesley Dobbs to call the area “Sweet Auburn” as a symbol of African American achievement.

In 1968, after King's death, Coretta Scott King founded the Martin Luther King Jr. Center for Nonviolent Social Change. This building is part of the King complex located on Auburn Avenue adjacent to Ebenezer Baptist Church. In 1977, a memorial tomb was dedicated, and the remains of Martin Luther King Jr. were moved from South View Cemetery to the plaza that is nestled between the center and the church. 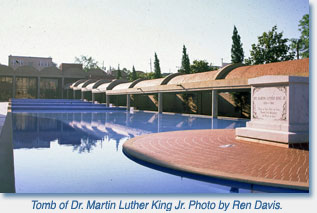 Thousands of visitors come each year to see the home where King was born and lived as a child, the church where he and his father preached, the building that was headquarters for the Southern Christian Leadership Conference where he worked as a civil rights leader, and his final resting place. These Auburn Avenue places are significant sites that contribute to the interpretation of the legacy of Martin Luther King Jr.

—Jeanne Cyriaque coordinates African American programs for Georgia's state historic preservation office. She is the editor of Reflections, the quarterly publication of the Georgia African American Historic Preservation Network and is a member of the Local Arrangements Committee.