The Carter Center and the Post-Presidency of Jimmy Carter 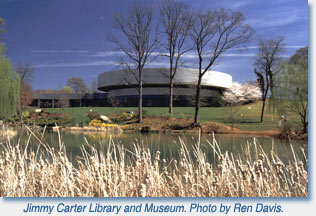 By the time he left the White House on January 20, 1981, Jimmy Carter had set unusual and ambitious long-term goals for himself. He intended, without returning to public office, to continue to work toward the promotion of peace, progress, and human rights throughout the world. The means to this would be the creation, in September 1982, of the Carter Center, a nongovernmental organization in partnership with Emory University. The permanent facility opened in October 1986 alongside his presidential library in a 30-acre park overlooking downtown Atlanta. While the building of presidential libraries and museums had become routine for modern former presidents, President Carter's plans for the center and for himself were unique.

Although he could not then envision the wide range of activities in which he would ultimately lead the center, from the beginning President Carter established principles that shaped the development of his institution. He directed that the center emphasize action and results rather than focus on policy research. He wanted to avoid duplicating the effective work of other organizations and concentrate on filling vacuums. The center would be nonpartisan and pursue a global agenda. It would also carry out its mission by collaborating with other organizations and leveraging its strengths.

President Carter has kept his home in Plains, about 135 miles away, but he and his wife Rosalynn, a partner in all his activities, spend nearly a quarter of their time in Atlanta and have visited more than 120 different nations on behalf of the center. Neither has taken a formal administrative position in the center, but they have played an integral role and dedicated the majority of their time to its projects. 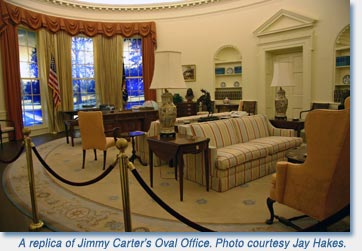 The earliest projects were to promote peace in the Middle East, to address international security and arms control, and to close the gap between what we know how to do in health care and what is actually achieved. President Carter reached out to prominent Republicans to gain their cooperation. The most important of these was former president Gerald Ford, with whom he developed a close friendship.

In the late 1980s, the center began to focus on bringing direct assistance to the neediest people in the world, especially the people of the developing world. With Dr. Norman Borlaug, winner of the Nobel Peace Prize for creating the "Green Revolution" in India and Pakistan, the center began an effort to bring agricultural self-sufficiency to sub-Saharan Africa. With the guidance of Dr. William Foege, then executive director, the center targeted the Guinea worm, a debilitating parasite afflicting some 10 million people in Asia and Africa, for eradication. By 2006, numbers have been reduced by more than 99 percent and the Guinea worm is close to becoming the only disease other than smallpox to be eradicated. The center's health programs in Africa and the Americas address neglected diseases such as river blindness, trachoma, lymphatic filariasis, and schistosomiasis. A new initiative, distributing insecticide-treated bed nets, has been launched against malaria.

President Carter's ultimate dream for the center was that it would aid in the resolution of conflicts around the world. To achieve this, the center began to play an active role in election monitoring and mediation. For example, when Manuel Noriega tried to falsify the election returns in Panama in 1989, President Carter exposed the attempted fraud. Noriega chose to abort the election. While Noriega lost any vestige of credibility, Jimmy Carter confirmed his.

Later that year the center was invited to monitor an election in Nicaragua, to be held in February 1990, and to mediate the civil war between the government of Ethiopia and the Eritrean People's Liberation Front. In September the cover of Time announced that "Jimmy Carter is Back," noting that Jimmy Carter "may be the best former president America has ever had."

By September 2006, the center had monitored 64 elections in Asia, Africa, and the Americas. The center and President Carter have been involved at the highest levels in resolving conflicts in Haiti, North Korea, Bosnia, Sudan, and Liberia. Some government officials in the Reagan, Bush, and Clinton administrations have viewed this involvent as interference. But more often, officials believe that the Carter Center and other nongovernmental organizations can be effective partners for government because they provide a flexibility that gmeovernments often lack.

The Carter Center and Emory have committed themselves to a relationship that will advance scholarship and education. Carter Center staff and Emory faculty are collaborating in teaching classes on public policy. Emory students participate alongside other students from all over the world in the center's internship program, which was recognized as one of America's 100 best by the Princeton Review.
On December 10, 2002, the Norwegian Nobel Committee awarded the Nobel Peace Prize to President Carter "for his decades of untiring effort to find peaceful solutions to international conflicts, to advance democracy and human rights, and to promote economic and social development." The work of the Carter Center was highlighted in the citation.

—Steven H. Hochman is a member of the AHA 2007 Local Arrangements Committee. He is director of research at the Carter Center and assistant to President Carter. He teaches as an adjunct at Emory University.