Places of Worship in Atlanta

Like other major cities, Atlanta has many places of worship. Some are located within walking distance from the meeting hotels; others are easily accessible via MARTA bus, train, or trolley; and others will require a cab or rental car ride. Each would invite you to visit as your schedule permits. All below have web sites on which you can find times for services. 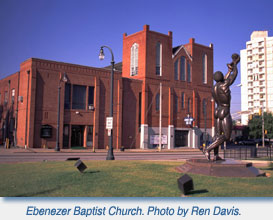 Perhaps the most historic church in Atlanta is Ebenezer Baptist. The "Heritage Sanctuary" where Dr. Martin Luther King Jr. was pastor is part of the National Park Service's historic site and is open from 9 a.m.–5 p.m., Monday–Friday and 9 a.m.–2 p.m. on Saturday. Ebenezer remains a thriving congregation under the leadership of Dr. Raphael Warnock. It meets in the "Horizon Sanctuary" across the street from the historic church (407 Auburn Ave., 404-688-7263, http://online.historicebenezer.org).

Two other historic churches in the Auburn Avenue corridor are Wheat Street Baptist, which touts one of the nation's oldest African American church credit unions, and Big Bethel AME, on whose steeple is a neon blue sign that says "Jesus Saves." Big Bethel is currently a major financial partner in a redevelopment effort to build mixed use housing and retail space at the corner of Auburn Avenue and Piedmont Avenue. Wheat Street (corner of Auburn Ave. and William Holmes Borders Sr. Dr., 404-659-4328, www.wheatstreetbaptist.org); Big Bethel AME (220 Auburn Ave., 404-827-9707, www.bigbethelame.org).

The oldest African American church in Atlanta, Friendship Baptist, was organized in 1866 by former slaves. It met in a boxcar that had been sent from Chattanooga to Atlanta to house the first classroom for what became Atlanta University. It is also the home church of Spelman College and has a close relationship with Morehouse College. Maynard Jackson, Atlanta's first African American mayor, was a member of Friendship, and it is the church of Hank Aaron (437 Mitchell St. SW, 404-688-0206, www.fbcatlanta.org).

The oldest Protestant church in Atlanta is First United Methodist Church. Founded in 1847 as Wesley Chapel, the church has the distinction of being the only historical church mentioned in Margaret Mitchell's Gone with the Wind. Former members of note include many of Atlanta's business and political leaders: Asa Candler, A.H. Colquitt, Henry Grady, Benjamin H. Hill, and Emily Winship (mother of Robert Woodruff) (360 Peachtree St. NE, 404-524-6614).

Central Presbyterian Church calls itself "the church that stayed." Founded in 1858, the church maintains a strong commitment to urban life from its original location across the street from the State Capitol and the Atlanta City Hall. The Atlanta Union Mission, an important social service organization, emerged out of this church (201 Washington St. SW, 404-659-0274, www.cpcatlanta.org).

The Shrine of the Immaculate Conception is located inside the oldest intact building in downtown Atlanta. The church is best known as the home parish of Father Thomas O'Reilly, who convinced Union troops to spare the church and other buildings during the burning of Atlanta (48 Martin Luther King Jr. Dr., 404-521-1866, www.catholicshrineatlanta.org).

Atlanta is also seat to an Archdiocese of the Catholic Church, headed by Archbishop Wilton Gregory, a Chicago native and former president of the U.S. Conference of Catholic Bishops. The Archdiocese covers the dioceses of Charleston, Savannah, Charlotte, and Raleigh. The cathedral for this region is Christ the King (2699 Peachtree Rd. NE, 404-233-2145, www.christtheking-atl.org).

The Greek Orthodox Cathedral of the Annunciation is a good distance from the meeting hotels, but its 60-foot domed ceiling with glass and tile mosaic of the Pantocrator and altar screens, icons, and classical sculptures are worth the trip. The church celebrated its centennial in 2005, although it has been located in several different locations since its founding in 1905 (2500 Clairmont Rd. NE, 404-633-5870, www.atlgoc.org).

New Birth Missionary Baptist Church is outside the perimeter in DeKalb County. One of Atlanta's "mega-churches," this 25,000 member congregation is led by Bishop Eddie L. Long. It was the site of the funeral of Coretta Scott King and her daughter, Bernice, is on the staff as an elder (6400 Woodrow Rd., Lithonia, 770-696-9600, www.newbirth.org).

The Temple, also known as the Hebrew Benevolent Congregation of Atlanta, formed in 1867. A Reform synagogue, the Temple has been the faith community for many Atlanta business leaders including Morris Rich. The Temple was an important source of strength in the community in the aftermath of the Leo Frank lynching. Rabbi Jacob Rothschild also befriended the Reverend Martin Luther King Jr. during the civil rights era. In October 1958, the educational wing of the Temple was bombed, part of a campaign to intimidate organizations across the South that were sympathetic to civil rights issues. Melissa Faye Greene's 1996 book The Temple Bombing recounts the story of this tragedy and also provides additional insight into the history and culture of Atlanta's Jewish community (1589 Peachtree St. NE, 404-873-1731, www.the-temple.org).

Al-Farooq Masjid of Atlanta, founded in 1970 by a group of primarily Pakistani and Arab Muslims, is closest to the meeting hotels. The Masjid offers weekly Friday prayers, as well as other prayer services and educational courses throughout the week (442 14th St., 404-874-7521, www.alfarooqmasjid.org).

The Atlanta Masjid of Al-Islam is another option. This mosque is associated with the leadership of Imam W. Deen Mohammed, Muslim American spokesperson of Chicago, Illinois. The Atlanta Masjid is home to elementary and high schools (560 Fayetteville Rd., 404-378-1600, www.atlantamasjid.com).

The Hindu Temple of Atlanta, also known as Balaji Temple, was founded by five physicians who came together in 1970 to raise funds and attract support for building a temple. Construction began in 1986 and lasted 10 years. The temple is based on Sri Venkateshwara at Tirupati in South India. Skilled Indian artisans were brought over to carve the hundreds of images that adorn the temple's interior and exterior (5851 Georgia Hwy. 85 in Riverdale, 770-907-7102, www.hindutempleofatlanta.org).

Atlanta's Buddhist communities date back to the 1970s and the immigration of people from China and other South Asian countries. The temples and worship places still tend to serve specific ethnic populations, such as Wat Buddhabuccha (3094 Rainbow Dr., Decatur), which is Thai; Chua Quan Minh Temple (1168 Benteen Ave. SE), which is Vietnamese; and Atlanta Buddhist Association (5383-D New Peachtree Rd., Chamblee), which is Chinese. There are also a number of Buddhist organizations associated with Emory University, including the Drepung Loseling Institute, which teaches Tibetan Buddhism as practiced by the Dalai Lama. For further information on temples and centers in the area, see www.aszc.org.

—Laura T. McCarty is vice president of the Georgia Humanities Council. She is the director of National History Day in Georgia and is involved in the planning and development of Teaching American History (U.S. Department of Education) programs in Georgia.