This article is based on the web-based essay by Clarissa Myrick-Harris, "Atlanta in the Civil Rights Movement," Atlanta Regional Council for Higher Education (www.atlantahighered.org).

Part One appeared in the November 2006 issue of Perspectives.

Atlanta is known as the "the cradle of the civil rights movement" for good reason. During the period 1940–70, local and national black leaders based in Atlanta developed and implemented strategies and tactics to increase black voting power, gain access to public facilities and institutions, and increase economic opportunities for African Americans. Most of this activism occurred with the support of a strong infrastructure provided by the black churches, social institutions, political organizations, and businesses of "Sweet Auburn" Avenue on the city's east side and the cluster of historically black colleges and universities of the Atlanta University Center (AUC) on the west side—Atlanta University, Clark, Spelman, Morehouse, and Morris Brown colleges and the Interdenominational Theological Center.

The leaders groomed in these two communities reprised strategies and tactics that had been used in the post-Reconstruction era 1880 to 1910. At various points, they united black voters to wield political power in negotiations with influential whites and launched direct action protests to continue to fight Jim Crow and racially motivated violence.

Major issues of the first decade of the modern day civil rights movement in Atlanta (1940–49) had been challenges since the late 19th century. African American leaders sought to increase the number of registered black voters and get black policemen on the city's police force. These efforts were advanced in the mid-1940s when several legal barriers to black voter registration were struck down: 1) the U.S. Supreme Court ruled the white Democratic primaries unconstitutional; 2) the state poll tax was abolished; and 3) the voting age was lowered from 21 to 18.

The 1946 midterm election for the Fifth Congressional District seat demonstrated the impact of 10,000 newly registered black voters. The winner, Helen Douglas Mankin, was the only one of 19 white candidates who sought the black vote. Her secret meeting with this constituency before the election became a model for gradualism through negotiation, which characterized the era.

Protest and Negotiation for Black Police

The black leadership of Atlanta dealt with the issue of police brutality and indifference during the period 1940–49 through public demonstrations, voter registration campaigns, and negotiations. A 1945 march from Ebenezer Baptist Church on Auburn Avenue to the Atlanta City Hall organized by the United Negro Veterans was a key demonstration in the struggle. Mayor William Hartsfield finally agreed to hire eight African American police officers in 1948 after black leaders guaranteed thousands of votes for his reelection. It was not a total victory for the black community, however. The city's first black policemen could not arrest white suspects and the officers were initially stationed at the Butler Street YMCA to avoid racial tension at police headquarters. 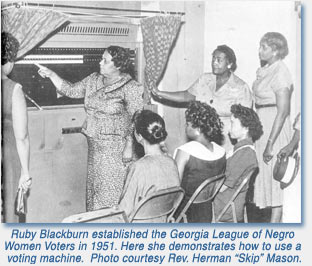 During the period 1950–59, the concerns of the black leadership included obtaining housing for Atlanta's growing African American community and desegregating the city's public transportation. The Southern Christian Leadership Conference (SCLC) was born and headquartered in Atlanta in 1957 to promote direct action for nonviolent social change. However, tactics of gradualism—backroom negotiations and compromise, as well as litigation—once again were the primary means of progress.

In the realm of housing, African American realtors in the Empire Real Estate Board and the white real estate committee of the Chamber of Commerce reached an agreement to designate residential areas on the west side that would undergo racial transition from all white to all black. Integration was not an option. Integration of the city buses and trolleys was achieved, however, by 1959 after a group of black ministers in the "Love, Law, and Liberation" movement defied the law and filed a lawsuit against the city.

The emergence of the Atlanta Student Movement and its use of nonviolent direct action as a tactic defined the phase 1960–65. Student activists of the AUC drew inspiration from the student sit-ins in Greensboro, North Carolina. AUC students Julian Bond, Lonnie King, Herschelle Sullivan, Carol Long, Ruby Doris Smith, and many others outlined their goals and strategies in "An Appeal for Human Rights." AUC students also established their own movement newspaper, The Atlanta Inquirer, with the help of local black businesspeople. SCLC's Ella Baker soon guided students from across the country in the creation of the Student Non-Violent Coordinating Committee (SNCC). The organization would recruit thousands of black and white young activists to go south during Freedom Summer in 1964. SCLC did the same in 1965 when it trained hundreds of volunteers for its Summer Community Organization and Political Education Project (SCOPE).

Differences between Old and New Guard

In addition to more aggressive direct action, the students differed from older activists because of their preference for a collective leadership style and their focus on encouraging group-centered leadership among the grassroots of the city. It could be argued that the group approach they preferred harkened back to the grassroots leadership style of black activists of the late 19th century, such as the largely anonymous women of the 1881 Washerwomen's Strike. However, at pivotal moments, the young activists and veteran leadership closed ranks, using sit-ins, boycotts, demonstrations, and older tactics of negotiation and litigation to fight for social change. An important victory for the movement in Atlanta occurred in 1964 after Martin Luther King Jr. took on the cause of black and white workers striking for better wages at the Scripto Factory. That local protest hinted at King's greater national focus on labor issues in the years to come.

The integration of the University of Georgia by Atlantans Charlayne Hunter and Hamilton Holmes early in 1961 led the state legislature to strike down its school segregation law and laid the foundation for efforts to desegregate the Atlanta elementary and secondary schools. Yet by the fall of 1961, only nine African American students were allowed to transfer to previously all-white schools. A decade would pass before a court-ordered "majority to minority" desegregation plan would take effect, and even then, Atlanta's schools remained segregated for much longer.

As a result of state district reapportionment that empowered black voters, African Americans became viable candidates for the state legislature and won elections. In 1962, Leroy Johnson won a seat in the state senate, making him Georgia's first African American state senator since Reconstruction. In 1965, a record 11 African Americans were elected to the state legislature, including Grace Towns Hamilton, Ben Brown, and Julian Bond. Bond was elected three times, but the Georgia House or Representatives refused to seat him, claiming he was un-American because of his statements against the Vietnam War. It would take a federal court order to finally seat him in 1967.

The cornerstone of the period 1966–70 was the radicalization of SNCC through its Atlanta Project, which attempted to encourage community control and to fully exploit electoral and economic opportunities. SNCC's Atlanta Project took shape as racial rebellions in the Dixie Hills and Summerhill communities expressed the frustrations of black people because of mistreatment by police and because they felt they had not benefited from the civil rights movement. The Atlanta Project began to question the role of whites in black organizations. In time, the Atlanta Project radicalized the Atlanta branch of SNCC, and by extension the entire organization.

After the assassination of Rev. Martin Luther King Jr. in April 1968, disillusionment with the non-violent struggle for integration increased. More and more African American activists focused on nationalist approaches to social, political, and economic empowerment As this decade ended Mrs. Coretta Scott King sought to further institutionalize the legacy of her husband through the Martin Luther King Jr. Center for Nonviolent Social Change, first located in the AUC and later on Auburn Avenue. [The Martin Luther King, Jr. National Historic Site and the Atlanta University Center are both LAC-sponsored tour sites.]

Political Victories—1970 and Beyond

The election of Maynard Jackson as vice mayor of Atlanta in 1969 bolstered the spirits of African Americans in Atlanta and prepared the way for Jackson's election as the mayor of Atlanta and the first African American mayor in the Deep South in 1973. The 1973 election of former SCLC leader Andrew Young as the first African American Congressman from Georgia since Reconstruction further affirmed black voting power. Although there was still much to achieve, it seemed that the century old fight for civil rights in Atlanta had not been in vain.

—Clarissa Myrick-Harris is a Distinguished Research and Teaching Fellow in the Interdisciplinary Center for the Study of Global Change, University of Minnesota Twin Cities. She is also vice president of One World Archives in Atlanta, Georgia, and has served as a curator of civil rights and black history exhibits in museums and online.