Here are some sporting events scheduled for the first week in January, in case your family and friends are looking for something to do while you are engrossed in the meeting. 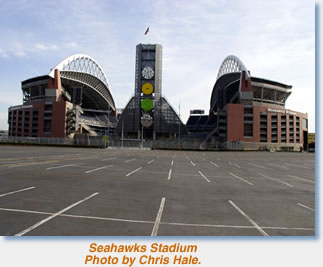 For football fans, the Seattle Seahawks will be playing Atlanta in the new Seahawks Quest stadium, starting at 1:00 p.m. on Saturday, January 2. To purchase tickets, go to www.seahawks.com.

Encouraged by a strong following of rowdy fans, the scrappy Seattle Thunderbirds of the Western Hockey League, an amateur league for players 16 to 20, will be battling Kelowna on Friday, January 7 and Tri-Cities on Saturday, January 8 in the Seattle Mercer Arena. Both games begin at 7:05 p.m. Tickets are available at www.seattlethunderbirds.com.
Basketball fans can see the Seattle Sonics, in a rebuilding season, face the Miami Heat at the Key Arena on Sunday, January 9 at 5 p.m. Go to www.nba.com/sonics for tickets.

Tips for the Outdoors Enthusiasts

Despite a reputation to the contrary, Seattle residents enjoy four seasons of outdoor activities.

While many mountain trails are inaccessible to hikers in winter, there are many all-season trails in and around Seattle. For a hiking guide, news of events and opportunities, and reports on the condition of certain trails, go to the official web site of the Washington Trails Association at www.wta.org.

Seattle is a walker's paradise, and a great way to get some aerobic exercise. Here are some ideas for possible routes from the downtown hotels and the Convention Center.

Northeast—to Microsoft co-founder Paul Allen's new biotech corridor and to REI's flagship store, where you can test ride bikes, rain gear, and hiking shoes; scale a climbing wall; or outfit yourself for your next ascent of K2—a few more blocks will take you to the Wooden Boat Center, the south shore of Lake Union, and the Fred Hutchinson Cancer Research Center.
East (and uphill)—to Seattle's kinetic Capitol Hill, where gays, Goths, and many other diverse populations mingle, and where you can salsa or tango the night away.

Before taking off on your own, grab a downtown map, and talk to the local staff at the AHA information booths. They will have many good suggestions. The Olmstead Brothers' landscape architecture firm planned a string of scenic Seattle roadways in the early 1900s that provide many options for the walker, biker, bus rider, and driver. Some ideas for longer walks are listed below.

Go west (downhill), through the market, to the waterfront, then north past Pier 70 to Myrtle Edwards Park. Follow the path along the waterfront to the Marina at the foot of Magnolia Bluff. The vistas will be great, and the breeze will invigorate you. Then either retrace your steps or ride back downtown on any southbound bus that stops on the Galer Bridge (above you).
Walk east on Pike to 12th Ave. East on Capitol Hill, then north to Volunteer Park (which features wonderful views and the Seattle Asian Art Museum). Return by walking east to Broadway, then south past St. Mark's Cathedral and Seattle Central Community College to Pike, and right (downhill) back to the Convention Center.

Seattle's ultimate walking place is Green Lake Park, where a newly paved 2.8 mile walking/roller-blading track and a 3.2 mile jogging path allow you to circle the lake while you view hundreds of species of trees, plants, birds, and waterfowl and thousands of humans going in either direction. Take either the Metro bus #16 from 3rd and Pike or #26 north from 4th and University, to Green Lake Park. You can return downtown via the same buses.

Discovery Park, a 534-acre nature park, is another wonderful place to explore on foot. Walking trails take you across meadows and sand dunes, through woods, along the beach, and up and down cliffs. The inner loop is three miles, and the outer loop, including a segment along the shore, is just under five miles. Take the #33 Metro bus to the park's north parking lot and back downtown.

For up-to-date information on skiing and snowboarding opportunities, and for cruises around the city and as far as Victoria, see www.seeseattle.org.

— Maureen Murphy Nutting is chair of the Local Arrangements Committee and an avid walker. She teaches at North Seattle Community College.