Seattle, Washington, with some 563,000 people, is the largest city in the state and the 24th largest in the nation. From trendy Belltown to Scandinavian-influenced Ballard to the diverse Chinatown-International District, its neighborhoods offer a fascinating range of architecture, cuisine, and lifestyles that reflect the diversity of the city.

Seattle neighborhoods are set off by major topographical features. Steep hills, valleys, bays, rivers, lakes, and peninsulas all combine to create local identities which unite and divide; the physical barriers help reinforce the mental images of neighborhood. Those neighborhoods are rooted, however, in Seattle's 150-year history.

Modern Seattle was founded in November 1851, when 24 settlers from Illinois and New York led by Arthur Denny gathered in the rain at Alki Point in present-day West Seattle. The small community called itself "New York" for the home state of one of the pioneers. The name was later changed, first to "Alki" (meaning "by and by" in the Chinook trading language); then to "New York Alki"—New York, by and by—perhaps to signify (or inspire) the settlers' ambition of creating a great city on Puget Sound.

Most of the Denny Party relocated in April 1852 to the site of present-day Pioneer Square. They christened the new village "Duwamps," but town physician David "Doc" Maynard convinced them to rename it for Chief Seattle (or Sealth), the leader of the Suquamish and Duwamish tribes. The town scored an early economic coup by convincing Henry Yesler to build Puget Sound's first steam-powered sawmill in Seattle.

These first Seattleites envisioned building a new metropolis, but, at least before 1890, such a destiny was hardly assured. Twenty-one years after the Alki landing, the Puget Sound Directory described the settlement of 1,500 residents as "resembling a New England town were it not for the…burnt stumps and ungraded streets." 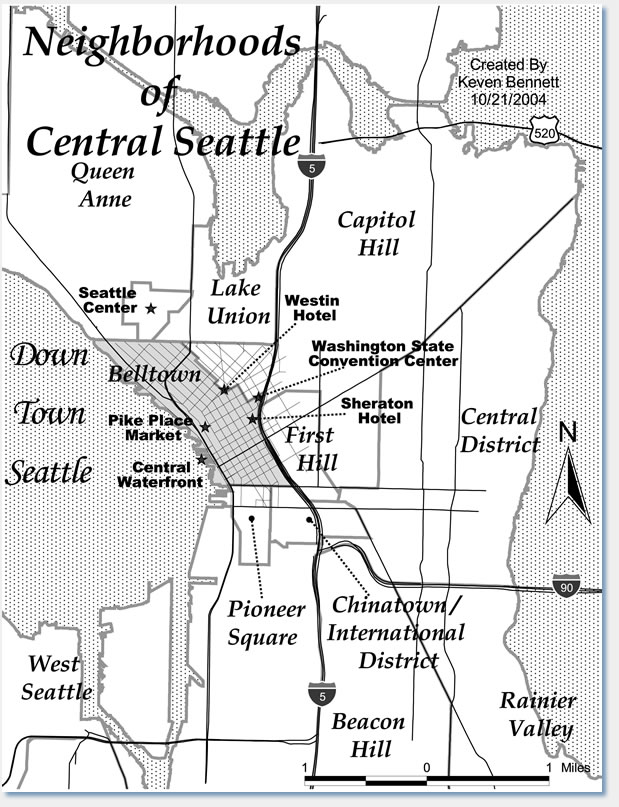 Seattle's spectacular growth from 3,533 people in 1880 to 237,194 by 1910 finally created that metropolis. Pioneer Square became Seattle's first downtown. Not even a devastating fire in 1889, which turned most of downtown into what Rudyard Kipling called a "horrible black smudge," slowed Seattle's growth. The downtown area was quickly rebuilt with brick and stone, creating the ensemble of late 19th-century architecture that survives in today's Pioneer Square Historic District. The Klondike Gold Rush of 1897–99 attracted waves of newcomers from East and West into the city, lifted the area out of a national depression, and established Seattle as the "Gateway to Alaska." The feat is commemorated today by the Klondike Gold Rush National Historical Park in Pioneer Square, where lively bars, clubs, and restaurants attract locals and visitors alike.

As new roads and street railways knitted the metropolis into an economic whole, rapid growth also led to the rise of distinctive neighborhoods. Between 1890 and 1920, Seattle annexed a number of outlying communities, creating a single polity, if not a single culture. Formerly independent communities often retrenched their sense of identity. De facto segregation concentrated certain ethnic and racial groups in prescribed areas that developed their own distinctive cultures. The result is today's eclectic and energetic urban mosaic.

Chinatown-International District borders Pioneer Square on the southeast and is the most culturally distinct neighborhood in Seattle. Seattle's second "Chinatown" (after Chinese immigrants were expelled from Pioneer Square in 1886) took root here in the early 1900s, as did a large Nihonmachi or "Japan Town" that remained vibrant until the internment of Japanese Americans during World War II. In 1951, Seattle officials proclaimed the neighborhood the International District to reflect its mix of citizens of Chinese, Japanese, Filipino, and, later, Southeast Asian ancestry. The area was threatened in the 1970s by the construction of the Kingdome (demolished in 2000 and replaced by Safeco Field and Qwest Stadium), but it survived as the cultural center of the Asian community even as many older residents moved away. Chinatown-International District continues to offer an eclectic mix of Asian restaurants, markets, and cultural amenities, anchored by the Nippon Kan Theater, the Wing Luke Asian Museum, and Uwajimaya, one of the largest Asian American retailers on the West Coast.

Downtown Seattle emerged in the early 20th century, after the University of Washington, which originally occupied the site of the present-day Four Seasons Hotel (built in 1924), relocated to northeast Seattle. Local truck farmers and their customers began gathering at the foot of Pike Street in August 1907, planting the seed for today's colorful Pike Place Market. Stairs from the market lead to the Central Waterfront, where vintage streetcars offer a shuttle from Pier 70 south to Pioneer Square and the International District. Unlike the core of most major American cities, Seattle's downtown remains a vibrant shopping center with Westlake Center Mall, Nordstrom, Nike Town and hundreds of other stores. It is also a cultural center hosting the Seattle Art Museum, the Seattle Symphony's Benaroya Hall, the daring new Seattle Public Library, and the historic Fifth Avenue, Moore, and Paramount theaters.

Belltown, which lies just north of downtown Seattle, was for years home to sailors and longshoremen, its working class character reflected in the Central Labor Temple, which still stands at First Avenue and Broad Street. However, in the mid-1970s the city approved zoning changes to encourage the construction of a high-rise residential district. Belltown today combines artist lofts, jazz clubs, and homeless shelters with new condos and upscale restaurants.

Seattle Center lies north of Belltown against the foot of Queen Anne Hill. It was redeveloped for the 1962 "Century 21" world's fair with the addition of the Space Needle, Pacific Science Center, Key Arena, and present-day venues for the Seattle Opera, Pacific Northwest Ballet, Seattle Repertory Theater, and Intiman Playhouse. The center is linked to downtown by a mile-long Monorail (currently undergoing repairs), which is slated for expansion by 2009.

South Lake Union lies east of Seattle Center. A historic maritime park, the Center for Wooden Boats Museum, is now being developed there, and the expanding Fred Hutchinson Cancer Research Center have seeded the growth of a major biotech industry in the neighborhood. Queen Anne Hill rises steeply north of Seattle Center and takes its name from the stately "Queen Anne" style mansions built on its slopes in the late 1800s. Seattle Pacific University occupies a tract on its northern flank. A sister hill, Magnolia, stands to the west and is home of Discovery Park (a vast in-city wilderness), the United Indians of All Tribes' Daybreak Star Center, and the historic Fishermen's Terminal on the south side of Salmon Bay.

Ballard is located on the opposite shore. Once a city in its own right, Ballard's mills and fisheries attracted thousands of Scandinavian immigrants. The neighborhood retains that distinctive accent, celebrated at the Nordic Heritage Museum. The completion of the Washington Ship Canal to link Lake Washington and Puget Sound via Lake Union in 1917 strengthened Ballard's maritime character, and the nearby Hiram Chittenden Locks (named for the U.S. Army Corps of Engineers commander who built them) are a popular attraction, along with the eateries and retailers, trendy and traditional, found in "Old Ballard" and along NW Market Street.

Fremont lies east of Ballard on the canal, in the shadow of the soaring Aurora Bridge (completed in 1932). Nonetheless, it proudly proclaims itself "The Center of the Universe." Noted for its eclectic public art, including a statute of Vladimir I. Lenin, the popular sculpture, People Waiting for the Interurban, and the troll under Aurora Bridge, the community offers a lively mix of bistros, artist studios, boutiques, and coffee shops. They are now juxtaposed with high-tech companies such as Adobe Systems and Getty Images.

The University District, home of the University of Washington Seattle (UW) since 1895, is located east of Fremont on the north side of the ship canal. It is a neighborhood of restaurants, cafés, a renowned street fair, the University Towers Hotel (originally named for historian Edmund Meany in 1930), the century-old University Bookstore, the Henry Art Gallery, and the Thomas Burke Museum of Natural History and Culture (both of which are on the UW campus), and, of course, thousands of university students.

South of the ship canal lies Capitol Hill, so named in 1900 by developer James Moore to attract wealthy home buyers to lots around Volunteer Park, which, like many of Seattle's parks, was designed by the Olmstead Brothers landscape architecture firm. Located immediately east of the I-5 Freeway, Capitol Hill is home to the Seattle Asian Art Museum, the campuses of Cornish College of the Arts, Seattle Central Community College, and Seattle University. The hill is also the unofficial center of Seattle's gay and lesbian communities. The local street scene along its main thoroughfare, Broadway, reflects its rich social, generational, and cultural diversity.

First Hill lies south and west of Capitol Hill and defines downtown Seattle's eastern flank. Seattle's first millionaires built mansions here to escape the noise and smell of Pioneer Square, making First Hill the city's "first suburb." Today it is home to the Frye Art Museum, numerous apartment and condo towers, and one of the largest medical complexes in the nation. First Hill was severed from downtown Seattle by Interstate 5 in the 1960s but it has been partially reconnected by Freeway Park and the Washington State Convention and Trade Center, the site of the AHA meeting. The Convention Center will soon be the new home of the Seattle Museum of History and Industry (MOHAI).

Seattle's Central District (or Central Area) spreads eastward from Capitol and First Hills toward Lake Washington. Even in a city known for rapid neighborhood change, the "CD" is an area of transitions. Between 1890 and World War I, it was a predominantly Jewish community anchored by Temple de Hirsch Sinai on 15th Street and Union and Bikur Cholim Synagogue on 17th Avenue (now the Langston Hughes Cultural Center). After a major influx of African Americans during World War II, the community became the center of the local civil rights movement. In the 1990s, the district changed again with the arrival of Ethiopian, Eritrean, and Somali immigrants and the return of European Americans, mainly young professionals seeking relatively inexpensive housing.

Beacon Hill is actually an extension of First Hill along the Duwamish Waterway. The entrance is "guarded" by the imposing 16-story Art Deco former U.S Public Health Service Hospital (which in 1999 became the corporate headquarters of Amazon.com). Georgetown hugs the hill's western slope and became infamous in the 1890s for its breweries, saloons, bordellos, and Meadows Race Track, where daredevil pilot Charles Hamilton demonstrated Seattle's first aeroplane in 1910. Today Boeing Field and the Museum of Flight are located in Georgetown and the community is undergoing a mini-renaissance as an artists' colony.

East of Beacon Hill, Rainier Valley extends southward to Renton. Its neighborhoods—Columbia City, Rainier Beach, Hillman City, and Genesee among others—were seeded by streetcar and interurban rail lines that once ran from Seattle to Renton. Many of the first residents were Japanese and Italian farmers. In fact the Italian community at the north end of the valley was, like Ballard, one of the first discernibly European ethnic neighborhoods in the city. The 2000 census designated the valley as the most racially diverse neighborhood in the nation, which can be clearly seen in the Ethiopian, Cambodian, Somali, Vietnamese, Chinese, Eritrean, Italian, Mexican, African American, and Indian restaurants along Martin Luther King Way and Rainier Avenue.

West across the Duwamish lies West Seattle, which feels more like an island than a peninsula thanks to its relative isolation from the rest of the city. Its geographic setting also makes it one of the most beautiful areas in the city, with unmatched views of Puget Sound, the Olympic Mountains, and the Seattle skyline. A modest obelisk stands at 63rd Avenue SW and Alki Avenue SW, near the spot where Seattle's first European American settlers landed on the chilly, drizzly morning of November 13, 1851. It reads "New York Alki" and bears the names of the 24 members of the Denny Party.

—Walt Crowley is executive director of HistoryLink and co-chair of the Local Arrangements Committee.

—Quintard Taylor is a member of the Local Arrangements Committee and the AHA Council, and teaches at the University of Washington Seattle.