Every winter, the AHA publishes our analysis of the academic job market for historians, based on advertisements placed on the AHA Career Center and (for the past several years) the H-Net Job Guide. Together, these sites provide a reasonably comprehensive picture of national hiring trends for tenure-track faculty positions, postdocs, and full-time non-tenure-track positions. As our work on Career Diversity has made clear, the academic job market is one among many: it has no monopoly on interesting, remunerative careers that make good use of historical expertise. Nevertheless, most historians are employed in academia, and the health of the academic job market is an important indicator of the discipline’s place inside the nation’s colleges and universities. Like the humanities generally, history has seen decreased enrollments and a decline in the number of majors since the recession of 2008–09. This long-term trend might have finally bottomed out, thanks to the creativity and determination of faculty who are reinvigorating history courses, and departments willing to put student interests and outcomes at the center of their curricula. Meanwhile, departments have responded to years of difficult academic hiring cycles by shrinking the size of their doctoral programs.

We may have reached a point of stability in the academic job market: during the 2018–19 hiring cycle, the AHA Career Center hosted advertisements for 538 full-time positions, a 1.8 percent decline from 2017–18. A decline in ads for positions beyond the professoriate dropped from 59 to 51, accounting for most of that decrease; by contrast, advertisements for academic positions remained virtually unchanged. Tenure-track jobs declined from 320 to 318, postdoctoral fellowships rose from 78 to 79, and non-tenure-track positions increased from 91 to 92. Jobs open to historians placed on H-Net declined by 9.3 percent. Together, the two leading job boards indicate a modest 2.9 percent decline in tenure-track positions and a 5 percent decline in contingent faculty positions compared to 2017–18.

The ongoing sluggishness of academic hiring exists within the context of demographic changes transforming higher education as a whole.

The ongoing sluggishness of academic hiring exists within the context of demographic changes transforming higher education as a whole. The number of students enrolled in colleges and universities has declined for eight consecutive years, with two million fewer students enrolled in colleges and universities than in 2011.1 While projections vary, studies suggest this trend will continue due to increasing costs of higher education and shrinking populations of high school graduates, particularly in the Midwest and Northeast.2 History majors and enrollments have declined even faster than overall undergraduate enrollment, as general education requirements have shifted and data showing positive career outcomes for history majors have been ignored. Academic hiring doesn’t directly follow these trends, but faculty consistently report feeling that their ability to make the case for replacing or adding tenure lines hinges on the number of students enrolling in history courses or, in some cases, the number of majors.

The AHA’s Career Diversity for Historians initiative has changed the language and conceptual framework of our annual jobs report, helping us to articulate the limits of treating two job boards as exhaustive indices of the opportunities available to history PhDs. Historians interested in learning about positions available beyond the professoriate would be well served to keep an eye on the #HistoryJobs hashtag on Twitter, which catalogs a broader group of job postings of interest to historians.

History PhDs who graduated in the past decade encountered fewer opportunities and more competition on the academic job market than any cohort of PhDs since the 1970s, when departments significantly cut admissions to their doctoral programs. Over the past decade, members of our community have called for similar steps. In fact, PhD programs have quietly been shrinking for some time, a trend that continued last year. In 2018, 1,003 students earned history PhDs, a decline of over 5 percent from 2017, when 1,058 history PhDs were awarded.3 This is no blip: the annual number of new history PhDs has declined 15.4 percent overall since 2014, numbers that reflect programmatic decisions made five to seven years earlier. Whatever its meaning for job seekers, the shrinking size of PhD programs is a lagging indicator of a discipline with a diminished footprint inside American colleges and universities. It also reveals that departments are not complacently carrying on with business as usual but making hard decisions about how many students to admit and how best to prepare those they have. 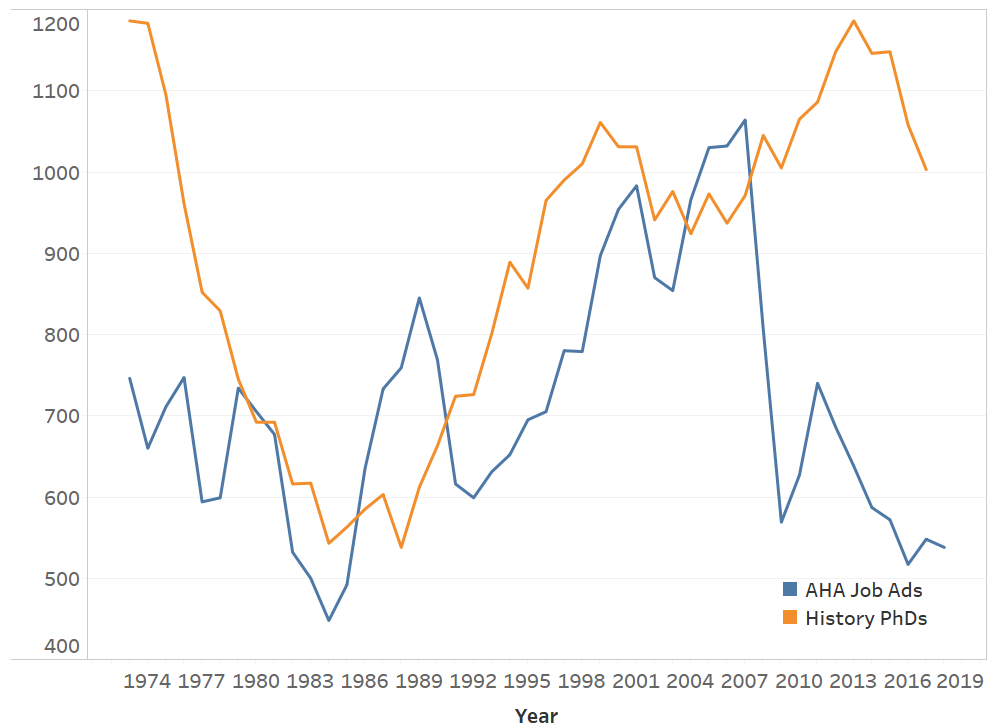 The Shape of the Faculty Job Market

Though they tell us little about career opportunities beyond the professoriate, advertisements on the AHA Career Center and H-Net are rich primary sources for understanding hiring patterns within higher education. This year’s hiring cycle reflects a profession stuck in neutral, with little change in the total number and type of positions advertised or the characteristics of those hired.

In 2018–19, the two job boards advertised a total of 691 faculty positions open to historians, 499 of them on the tenure track. As always, the majority (64 percent) of tenure-track positions were intended for assistant professors. An additional 18 percent either were open-rank hires or indicated a willingness to hire at the assistant or associate level.

Each year, the AHA asks advertisers basic questions about their hiring process. From that survey, we compiled data on 53 newly hired assistant professors, who all shared one salient trait: they had graduated recently. Half (49 percent) were hired one year or less after receiving their PhDs; two-thirds had earned their PhD within the previous two years. Very few historians received tenure-track offers three to five years after graduation, but 13 percent of tenure-track openings for assistant professors went to applicants six or more years beyond their PhDs, which might reflect movement within the professoriate rather than new individuals entering tenure-track positions.

While considerations of the tenure-track market have focused mostly on early-career historians, tenured faculty members have also experienced a decade of diminished opportunities for mid-career mobility.

Whatever their background, new hires emerged from competitive applicant pools, with a median of 78 applicants and a mean of 93 per assistant-professor position for which we have data. Applicant pools were smaller, on average, this year than in 2017–18. We have less data on senior hires, which seem to attract fewer applicants. Tenured faculty looking to make a career change have scarcer opportunities than those looking to start assistant-professor positions: 35 percent of tenure-line positions sought senior faculty, many of them in open searches. Only 17 percent excluded assistant professors from applying. While considerations of the tenure-track market have focused mostly on early-career historians, comparatively privileged tenured faculty members have also experienced a decade of diminished opportunities for mid-career mobility.

Cntingent positions—instructors, lecturers, clinical professors, and visiting appointments—made up 28 percent of full-time faculty positions advertised last year, unchanged from 2017–18. The part-time, term-to-term positions associated with the most exploitative forms of “adjuncting” are underrepresented here because few are advertised on national job boards. The full-time contingent positions advertised on the AHA Career Center or H-Net reflect a range of employment conditions and contract lengths. Most are one- or two-year visiting appointments, but roughly a quarter represent stable, long-term employment.

Last year, the AHA started tracking the Carnegie classification of institutions placing advertisements on the AHA Career Center or H-Net. For the second year in a row, research universities dominated academic hiring: 56 percent of all tenure-track positions in 2018–19 were at research universities, as were 51 percent of full-time, non-tenure-track positions and two-thirds of all senior hires. These numbers stand unchanged from last year and at odds with the overall composition of history faculty, most of whom are employed at teaching institutions. The concentration of tenure-track positions at research universities, should it continue, clearly pertains to PhD candidates entering the academic job market. The AHA will continue to monitor the Carnegie classification of employers to better understand the employment prospects and disciplinary contours within American colleges and universities.

We are now entering our second decade of anemic academic hiring, during which thousands of early-career historians have experienced disappointment, anger, and despair at the limited number of entry points into stable faculty employment. Responding to this situation should prompt us to recognize the accomplishments of historians building careers and contributing to our community from outside the professoriate: we will need their help to demonstrate the value of historical thinking beyond the academy. But majors and undergraduate enrollments remain the foundation of the discipline within higher education, and improving the faculty market means strengthening that foundation. There are signs that years of declines in enrollments and majors may be leveling off, even beginning to rebound. But challenges to the discipline remain considerable: arguing for the value of that discipline is work we must do together.

2 Scott Jaschik, “Are Prospective Students About to Disappear?” Inside Higher Ed, January 8, 2018, https://www.insidehighered.com/admissions/article/2018/01/08/new-book-argues-most-colleges-are-about-face-significant-decline.

Dylan Ruediger is coordinator of Career Diversity for Historians and institutional research at the AHA. He tweets @dylan_ruediger.